Korven the Prime as a Pet

Recently I have been trying to level up gathering professions on one of my characters in order to obtain the Working Better as a Team guild achievement, my herbalism skill was at 579 so I decided to go to the dread wastes, in the hope that I would find herbs of a sufficient quality to level my herb gathering skill. Whilst doing so I decided to do a few quests as a means of keeping things interesting.

After completing the The Scale-Lord quest I was able to strike the amber that held Korven the prime and release him from his slumber. When he awoke I decided that I didn't want to get tangled up doing loads of quests that I had done before, so I didn't click on him to begin any of the quests that he offers, and instead left the underground dwelling of the scale lord to make my way elsewhere.

At this point I noticed that Korven was following me, and soon after leaving the underground dwelling I found myself engaged in combat with several Mistblade rippers, much to my surprise and delight, Korven took part in the battle, though he didn't seem to be doing much damage.

Anyway, my question is this:

How can I keep Korven the prime as my pet? I imagine that he will continue to follow me as long as I don't take any of his quests and/or complete them. If I leave the dread wastes will I lost him? I'm reluctant to try it just in case I leave and find that he no longer follows me around when I get back.

Here is a picture of Korven the Prime 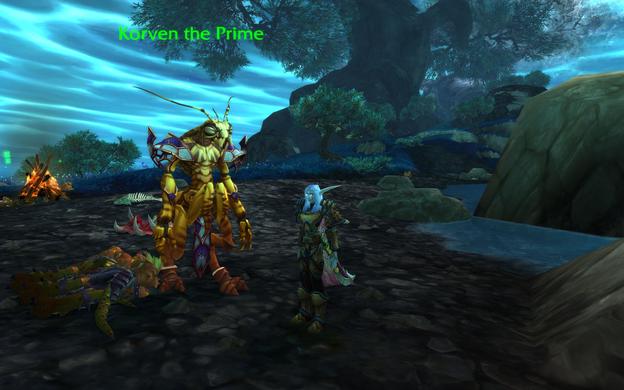 This is a phased npc follower. You will have this follower in certain areas as long as you meet the quest criteria. You may leave and return - the follower will vanish when you leave the relevant areas and the follower will return when you return.