Game Over if all crew dead but have cloning bay?

Regarding the advanced edition of FTL:

If all of your crew dies but you have a cloning bay on your vessel, is it immediately game over, or does the cloning bay prevent that? Is the game smart enough to know that a damaged cloning bay and a fully dead crew means you cannot recover, but a functional one (even if temporarily without power) could revive your crew?

Also, does this answer differ between hostile ships and your own ship? (That is, do you get to capture and loot enemy vessels that have all dead crew but have a functional cloning bay?)

I've just tested this out by holding a party in a de-pressurised weapons room. The crew seemed to have a great time and, providing the clone bay remained online and powered, all woke up the next morning with only minor hangovers.

By powering down the clone bay, however, as soon as a crewman died I was given a big angry warning saying "Clonebay off - Crew are dying!", despite the fact that I was able to re-assign power to fix this. When the last crewman's DNA was lost, I was given the standard Game Over screen

The clonebay will store a dead crew member's DNA whilst it has power. If it loses power for whatever reason, the warning will sound and you'll have around 4 seconds to restore power or lose that crewman. It does not matter how close they are to reviving, and once power is restored all progress is reset. This probably means it is possible to survive against non-drone non-lanius boarders for extended periods by de-pressurising the entire ship, letting everyone die, then juggling the power in your clone bay to keep your crew in storage, but stop them from reviving -- this idea is not without merit, since it's feasible that the invaders would die before kicking over the clonebay, and it would prevent your crew from constantly respawning and dying again, preserving their stats. Personally, however, if I were in this situation I'd just power down the clonebay and take the quick way out.

I suspect that the same will be true for enemy ships - you can capture and loot as soon as the last crewman's DNA is removed from the clonebay. How the Backup DNA Bank would change this is not clear.

I have boarded enemy ships with cloning bays, and if their cloning bay remains online and powered, eliminating their crew does not grant victory of the battle. I cannot prove this, beyond my word however.

In regard to the backup DNA bank + Clone Bay destroyed + All Crew Dead question... The game doesn't seem to know what to do. I just had it happen by accident and the game is stuck where I can't jump; no game over message. 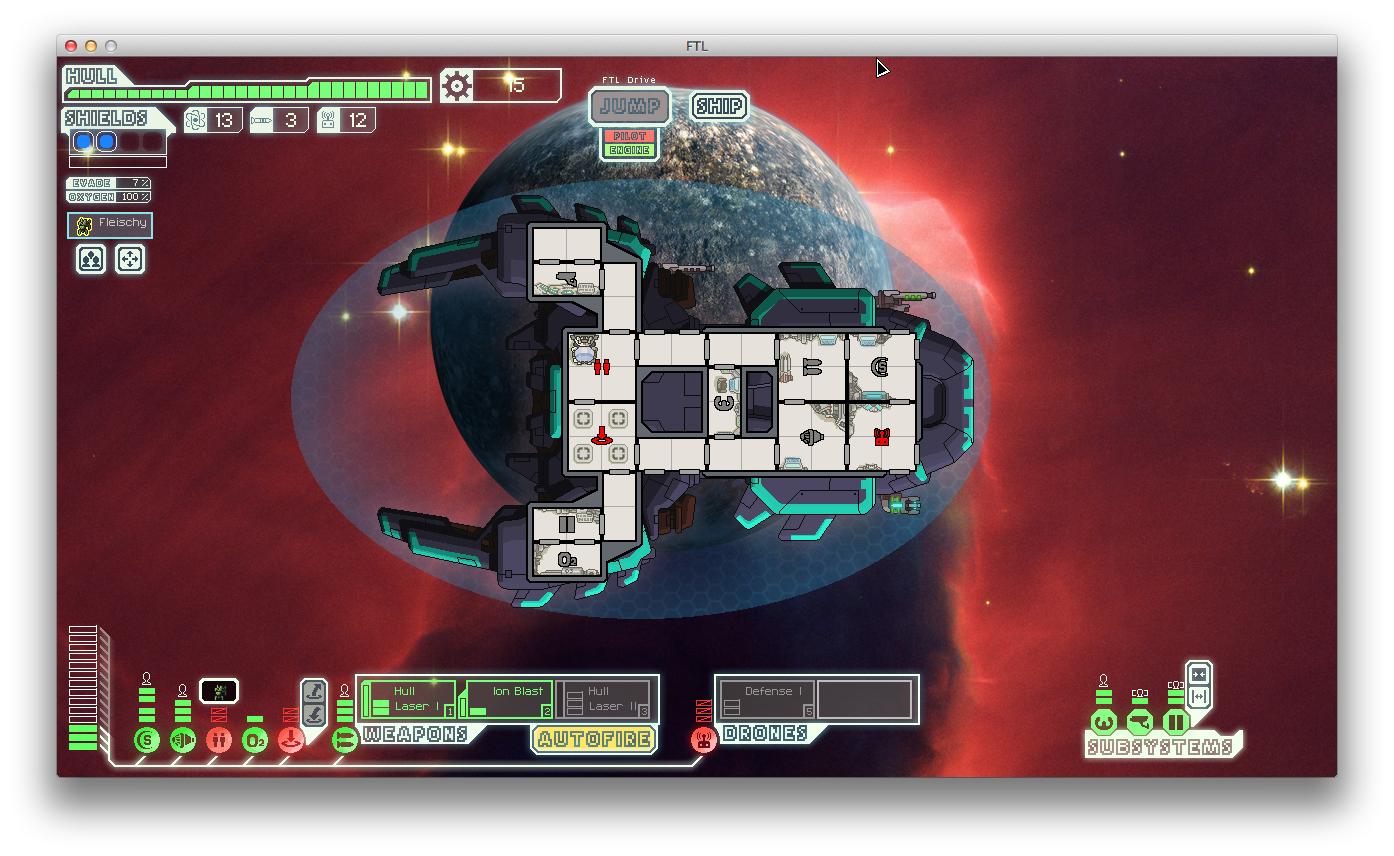 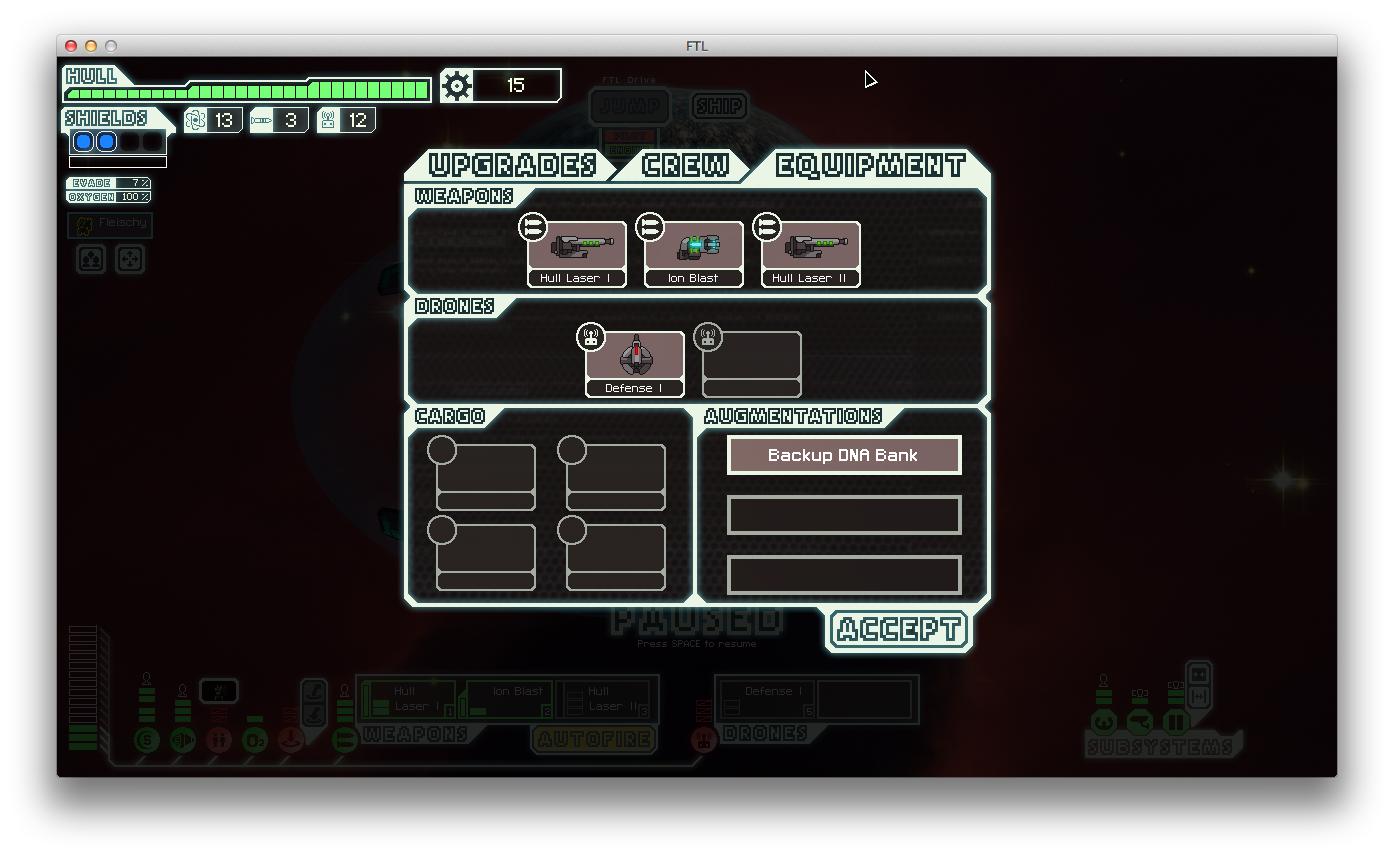 Received the following from FT Tech Support in response to the above issue:

"That's a tricky end game state to detect, as there are a lot of ways out of it. If you had a repair drone or repair bomb, then you'd be able to save yourself. Or if you had another crew rewarded after the fight, you could save yourself. So right now we've just left it as an odd state that you have to manually leave. Thanks for the report though."

0
Clone bay damaged crew dead but backed up with DNA backup can you continue game?

13
How do you collect all the crew types?
17
Is it possible to re-name crew-members in-game?
10
Damaging Piloting on Automated ships
11
Should I mantain Cloning Bay powered when traveling?
13
How does the Zoltan Explosion work?
15
Can I 'win' with all my crew on board the destroyed final ship?
11
Does a beam weapon have to hit a crew member - or just the square they're in?