I purchased Payday2 a couple of weeks ago. I really like it and it's really fun, but I'm having difficulties when it comes to playing solo on some of the missions.

Why I want to solo:

I realize these are minor reasons and you could just argue that I should play multiplayer. Aside from that... How can I stealth missions solo at a lower level when there are so many obstacles in my way? I know it's supposed to be challenging but seriously it's nearly impossible on some levels (The Framing Job) in particular.

Is there another strategy I can do? I'm currently running the shotgun with a silencer, and a pistol with a silencer. I can patiently do the Framing Job if not for there being like 8 Guards and I only get one body-bag. It frustrates me that you can't even drag the bodies else-where.

1) How can someone solo a stealth mission at a relatively low level? If not possible at a lower-level, how can I level quickly as the missions I'm good at and enjoy give me -50% -> -100% Exp due to how often I play them.

2) Are there any other ways to keep stealth on a mission? Framing Job in particular?

Stealth at low level is all about concealment and learning the map and using it to your advantage. Learn where the guards go and don't go. Learn which objects you can hide behind. Learn loot shortcuts, such as the tiny side windows on Framing Frame day 1. Learn how long things take (or install a mod that gives you a timer). Perhaps the most important thing is: consider, but don't hesitate.

You need to get your visibility down as low as possible. Having it under 10 should be fine in most cases. Most of the time you shouldn't need a silencer on your main weapon. You won't be shooting much, especially before you get more body bags. There's no reason you should run out of bullets on your pistol. Just pick a primary weapon that has the best concealment. Melee is recommended if possible: one hit while undetected will do the trick. You'll want to use something concealable with long range, like the telescopic baton.

Select a mission where it's difficult to get trapped by guards or civilians coming from multiple directions at once. Framing Frame is one of the worst missions to do alone nowadays as it's very easy to get trapped. You need a friend, or preferably many friends, to keep an eye on the guards' movement.

Missions like Bank Heist (if you're willing to "manage" some civilians), Ukrainian Job and Election Day are one of the easiest to finish alone in stealth. You can usually keep an eye on the people around you yourself.

Once you have fast hands, sprinter and transporter you're good to go. The rest is up to you. Cat burglar is extremely useful in many cases.

Assets can be useful in stealth, but honestly, I usually save the cash and ignore them. Buying an extra keycard is something I usually do just to save an ECM for bad situations though, or to avoid drilling.

Nothing is impossible (as long as it's marked stealthable), but some jobs simply get a lot easier with more unlocked skills. Also remember easier difficulty means less guards in most cases.

There are pretty much two types of stealth missions, with very different requirements.

When you're playing solo, you have the trouble that you need the assets more than ever, and that you need to unlock them all yourself. This means you'll have to branch into both the Mastermind and Ghost trees. In my experience, hitting level 25 is pretty much the lower boundary you need for the heavy (ninja) missions. Things you'll definitely want are:

Other than that, keep your detection as low as possible. Detection determines both how close people need to be to see you, and how long it takes for them to be alarmed. 3 appears to be the hard-coded minimum; in my experience, 10 is about the maximum you can get away with on ninja missions. Try to get it to 6 or lower.

Practise makes perfect. Don't be discouraged because a hard mission fails. The game can be a little finicky and counter-intuitive with stealth. Try to get the hang of patrol paths, camera locations, and safe spots to hide. Knowledge is power, doubly so on higher difficulties.

This mission held something of a curse over our gaming group. But we eventually figured out the do's and don'ts so that we could get through even with just two people. Two is a lot easier than one, but hopefully an overview will help you get through in solo all the same.

This is one of those missions where the assets will make the difference between success and failure.

Other assets, like the ammo bag and medic bag, are at your discretion. They may make a difference when the alarm goes off and you need to fight your way out, but they're not generally useful when you stay sneaky.

The lobby is central to the building and looks out to the street (which I'll call the front). Clockwise from the lobby are gallery rooms A through E. Close to E is a bathroom where bought assets like key cards, ammo bags and medic bags appear. 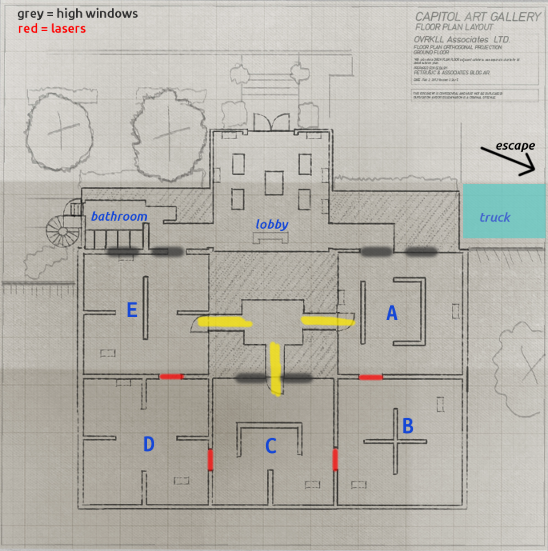 There are two ways out of the building: through the front door in the lobby, and out the bathrooms close to E. The bathroom will probably be our first way in.

The lobby is guarded by someone at the desk, and occasionally guards walk in there. However, you can (and should) open the front door, because you'll need to escape through there.

Safe havens are the security room (once cleared), and the inner part of C (safest) and A (less so), provided there are entry points (big white blocks) there. Guards rarely come in between the inner wall and the entry point, and it's usually safe to hide or leave body bags.

First, get on the roof. See the small windows you can use to peek into gallery rooms A, C, and E? We'll come back to those later; for now, peek through the skylights to find the following:

Once you have these memorized/written down, peek through the skylights to spot any paintings with red 'sold' stickers. You will not be able to see all the paintings, but it should give you an idea still. There should be between 6 and 9 paintings with stickers.

Remember those small windows on the roof? Rooms A, C, and E each have two small windows high up the wall facing the street. It takes some practise, but someone with Transporter aced (+50% throwing range) can toss paintings up and through there. Keep in mind that loot that's not being carried attracts a lot of attention, so do this only when the room seems clear.

While getting out through the lobby is feasible (and probably necessary), entering through there is dangerous. Your visibility is almost nil without the desk guard spotting you, and cameras may make it even harder. The lobby is not a viable entry point. This leaves us with the roof and the bathrooms.

You'll want to start with taking out the security camera's. Use the card from the bathroom and take out the guy behind the screens. Try shooting him so that his head stays out of sight from the door you just opened --guards spot dead bodies and hostages by the head-- otherwise, you may have to bag him. You're down one pager now.

Clear out all the paintings in the room with the security door. If it's room E, carry them out through the bathroom; C and A should probably store them in the security room for a bit.

Tip: You can hide behind the small pillars you find in the gallery rooms. This is especially useful in room D when there is no entry point there.

Depending on where the lasers are, branch out and clear neighbouring gallery rooms. Once you've done that, start getting the paintings out: toss them through the small windows looking out onto the roof. Remember to actually pick them up next time you can make it out and to the roof!

Getting out through the lobby

Getting out from A means having to go out the lobby. The guard at the desk is very likely to spot you if you try to get past, but there's a little trick to it.

Sit in the corridor leading to the lobby, and stick to the left wall so the guard can't spot you when he looks around. When he turns his head away for a bit, sprint and immediately crouch behind the closest sculpture in the lobby (to your right). Guards need about a second to register footsteps, and this gives you enough speed to make it to cover without alarming him.

Things will go awry at some point; maybe you get boxed in, maybe you bump into a guard around the corner. Internalise this list of what to do when someone is alarmed:

If you have already answered four pagers and you're spotted, you're no longer getting away quietly, so you buy as much time as you can so as to get as many paintings out as possible:

There's no point in buying time if you're not using it to complete your objectives. If you have the paintings you want, race out. If not, work to get as many as you can:

Only shoot people that are blocking you or shooting you. Police AI works with threat ratings: if you don't shoot at/near them, you're less of a threat and less likely to get targeted. Let your AI buddies do the skirmishing; focus on the paintings.

3
Leveling up in solo-play?

7
How does rewarded money work (pay grade, day rate, offshore account, ...)?
13
What are the underlying mechanics of Ammo bag and Medic kit in Payday 2?
6
As a mastermind, can I dominate multiple enemies at once?
2
How do cameras work?
10
What actions result in the police being called?
5
How can you complete the guessing game achievement on PC?
15
How can I pull off a Bank Heist without the cops getting involved?
1
How do the additional guards work in Framing Frame day 3?
2
What mission gives the most money the fastest?