I recently bought the game and just finished the campaign and want to start playing some online multiplayer.

Every server I attempt to join, I don't have the expansion pack for it. Whether it be the naval pack, china rising or second assault. From what I gather there isn't a single server that I can join that doesn't have an expansion pack as a requirement.

And these things all cost $20 per pack seriously? This has got to be a joke and I must be doing something wrong. That or I am seriously getting ripped off here buying a game that has a multiplayer that doesn't work without buying more add-ons.

tl;dr:
Can't play BF4 online because every server requires me to buy an expansion pack. Is there a way to play multiplayer without spending extra money?

In the filter search you can explicitly fitler out any servers requiring DLCs (second row in the filter pane). Just click each DLC twice to change it to [x] 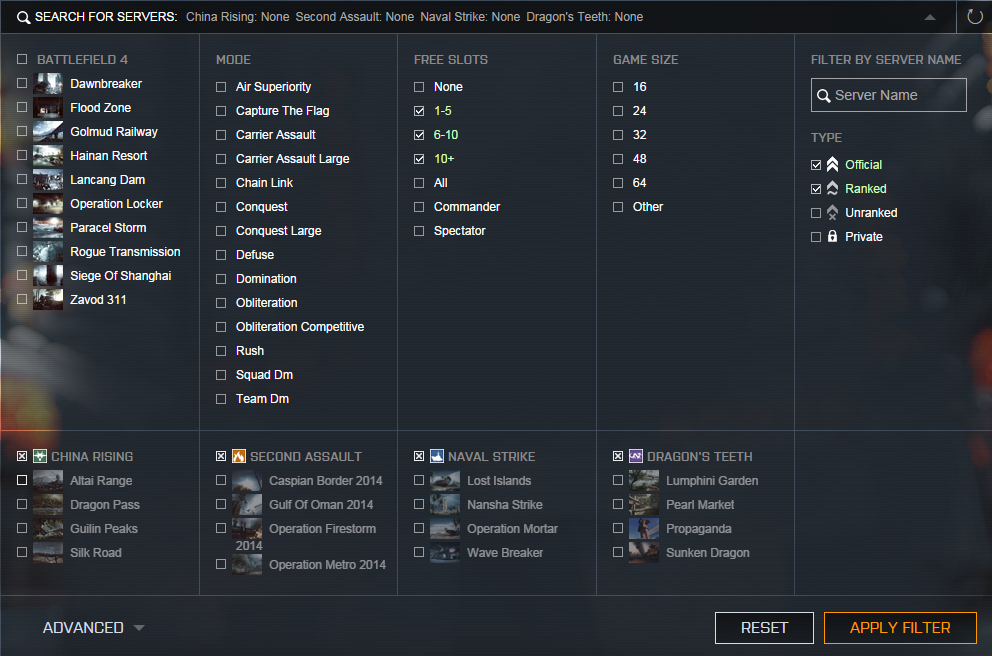 Filter your search. Choosing the maps you have. Also your search may be set to your region. Many options in the filters.

I can't speak for Australia, but in the UK/Europe, there are still plenty of servers that are restricted to the base mapes. Filter your server list (tick for base maps, cross for expansions)... obviously, most premium players had prefer the variety of maps on offer in the expansions and will seek to play them, but there are still plenty who only have the base game. You might not get the same choice of server/game mode, but you should usually be able to get a game somewhere.

Of course, in Oz, you may have a smaller server pool to choose from... I've no idea if it is feasible to play on asian servers.

FYI: I paid £25 for the base game and £25 for Premium, but I waited for 6 weeks after launch. Combined, I paid £10 more than the launch price of the base game... Perhaps by now Premium is more cost-effective for you? FWIW - I think that the expansions thus far are pretty good and offer a variety of maps/modes that will extend my time in the game. YMMV.

Not the answer you're looking for? Browse other questions tagged battlefield-4 .