So I got this new weapon: 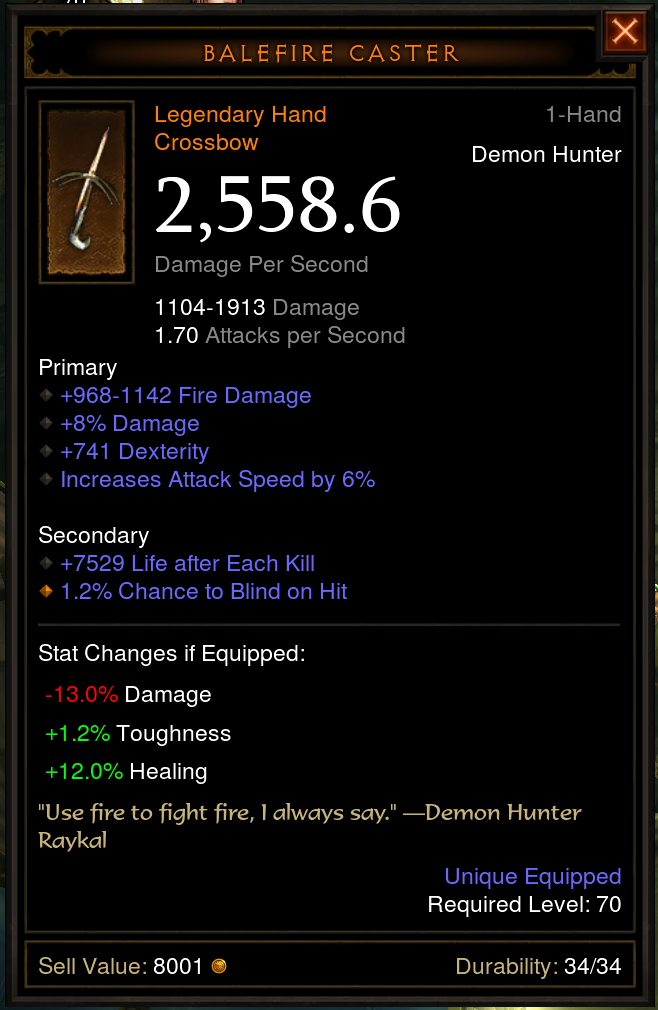 However, it lacks a socket, so I need to replace a primary attribute with a socket. My question is which primary property should I replace? It comes down to increased attack speed or an additional percentage of damage. On a more general note, on a weapon, sould I go for attack speed or %damage ?

As a Demon Hunter :

Reroll attack speed if you already have more than 2.5/2.6 Attacks per Second. At this rate you generate hatred fast enough and the difference between a 1.6 APS weapon and a 1.7 APS weapon won't be that much.

Reroll +8% Damage if you like having a high Attack Speed. This is my case. I have more than 2.8 Attacks per Second which brings a real comfort in-game regarding hatred generation and effect procs (like Night Stalker).

For the other classes :

Again, it depends on your build and your personal preference.

In the end it's your choice and both are good. You don't have to focus on the number displayed on the weapon but on the crits you actually do in the game and the frequency at which those crits appear. That's the difference between sheet DPS and effective DPS.

2
Signature spell damage comparison with attack speed
16
Can I be an effective tanking Monk without a Shield at higher difficulty levels?
8
Should we use slow or fast weapon on the wizard?
1
How should one weigh Critical Hit Damage when selecting equipment?
4
Enchant Property: Damage vs. Attack Speed %
3
What factors should I consider when comparing 2-Hand to 2x1-hand weapons?
7
Season 20 Holy Shotgun Paladin - Which stat to choose?