How best to maximise a Thorns-based Crusader build?

After looking at this question after looting a level 70 adjusted Hack, I was thinking a thorns based Crusader build might work (although I've never played Crusader). Along those lines, I have a couple of questions:

I think this type of build will be a lot of fun just standing around and letting things kill themselves on me, so any other advice is appreciated.

Max amount of thorns with the following assumptions: 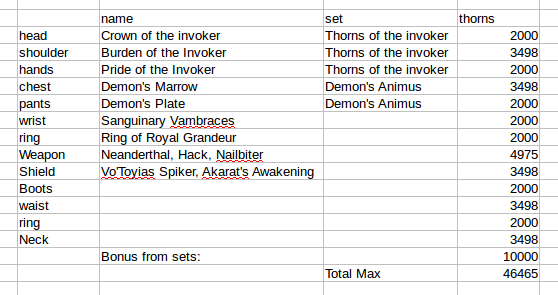 With the Crusader you have a few ways you can achieve a decent thorns build. I will only point out certain skills and runes that are focused strictly on thorns and skills/runes that have good synergy with thorn gear and thorn skills/runes.

My favorite is probably a cooldown reduction thorns build. Because it works decently in multiplayer games, allowing you to hold agro a higher percentage of the time with Provoke.

Bread and Butter for thorns in BOLD.

DO NOT pick any skills or runes that prevent you from getting hit. If you block an attack you are still getting hit and it will still activate thorns.

List of items that interact with thorns or have thorns naturally. You can get good amounts of thorns from yellow gear as well. Just enchant a piece to give you thorns or watch for thorn drops. Use those until you can replace with more important gear.

Crucial to thorns build for crusader, my opinion:

I can't stress this enough. Just be creative, do what you think is neat and fun. Listen to others for ideas, but don't always copy. Go out there and be weird!

Not the answer you're looking for? Browse other questions tagged diablo-3 diablo-3-crusader or ask your own question.

13
How does Thorns work?
3
Which legendary gems affect thorns damage?

37
How is skill damage calculated based on weapon damage?
3
What is the best Witch Doctor build against vampiric bosses?
3
How do you use "Marked For Death"? What's the best way?
3
How does this Barbarian build generate fury?
13
How does Thorns work?
2
How can a Firebird build compete with Tal Rasha's after 2.4?
1
How do we know what build top players use?