Why am I suddenly hostile to the whole world?

I've been doing a Cathar world conquest, and suddenly all hell has broken loose. The entire world seems to be against me... in a weird way. I'm not in any war, everyone is just hostile for some reason. Here's my ruler's diplomacy screen/active wars:

As you can see, I have a few truces, but a very large number of these yellow blips. When I click on one, it takes me to a completely random (as far as I can tell) duchy. I've gone from places in Russia to North Africa to India by clicking on them. My borders currently don't really extend east of Italy so there's no adjacency, and there's no rhyme or reason to the religion or culture of the pips (which I would expect if this meant I had, e.g., a Jihad or Crusade called on me). Hovering over them produces no tooltip text.

That's a picture of the Byzantine Empire (who I'm spying on) as you can see, I'm hostile to their armies, even though I'm not in any active war against them. 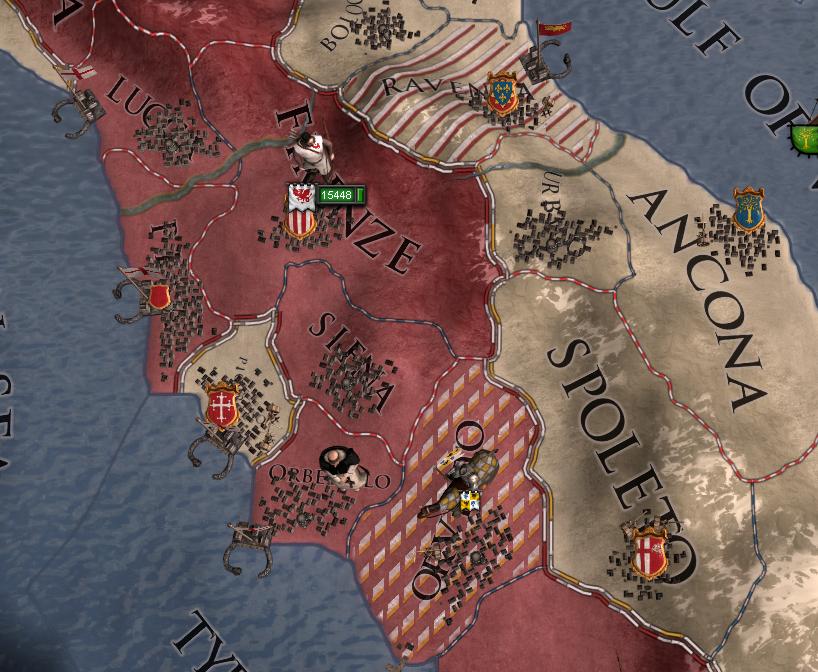 Here are some sieges, as you can see, I've completely sieged a province in Italy (upper right), despite there being no war. Some army I'm not hostile to partially sieged one of my provinces, which I can't siege back. I think it's a trade post that got sieged, though technically I own the trade port somehow. 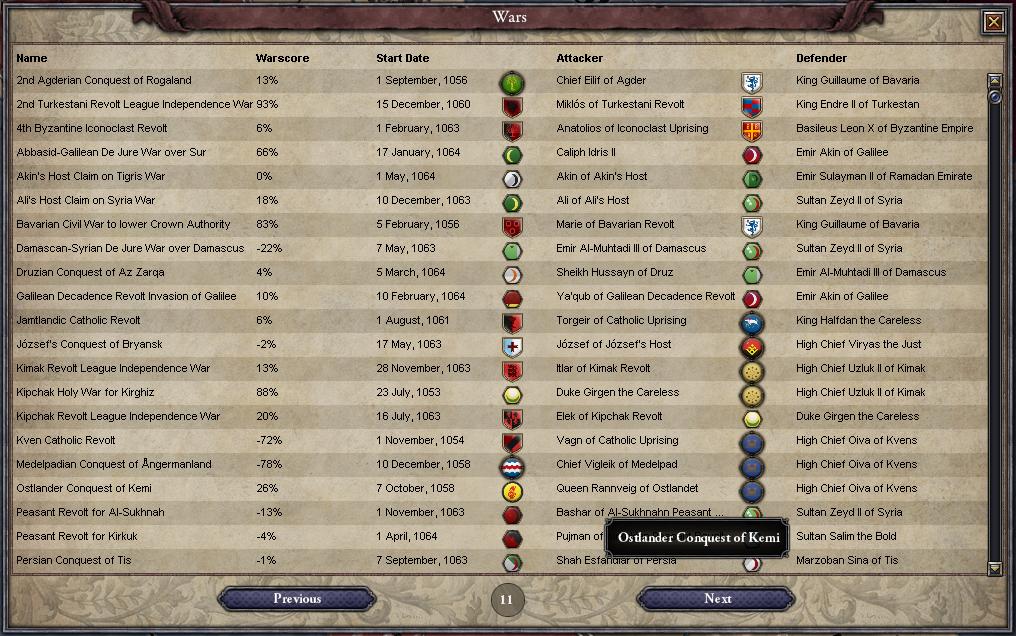 Finally, there's the ledger, nothing out of the ordinary as far as I can see.

Recent notable events in my game:

Can somebody explain what happened? I really have no idea what's going on and having tiny little 500 man armies failing to siege random things in my empire and generally slowing down my troops with fights I have no vested interest in is rather obnoxious. I should note that I can still declare wars as normal, and I can get warscore, siege, and enforce demands as normal. Nothing seems to have changed except the game made me hostile to everyone.

It's a rather rare glitch, which can easily be fixed by fully restarting your game.

If you don't want to lose your current progress, you can save it normally and by the time you restart your game, it will look like nothing ever happened.

2
Why are my vassals revolting when I give them just one title?
6
How to keep HRE at bay as a pagan (Old Gods)?
3
How do you win a war in CK2?
2
Unwinnable war?
6
Conflicting Wargoals
14
How should I punish my revolting vassals?
8
Can I undo the creation of this merchant republic?
1
Uninteractable Ghost Armies
5
How can I keep my Kings from fighting each other?
7
What are the benefits and disadvantages of having multiple religious heads as landed vassals?