Why is my pet Archon attacking me?

I do NOT have conflict and have not attacked my pet (I'm carrying Frost Brand).

Any other reason my my pet would attack me, and how to I pacify it?

Well, I have come across the exact same situation, in my current gaming run, with a small difference: the Archon was confused. 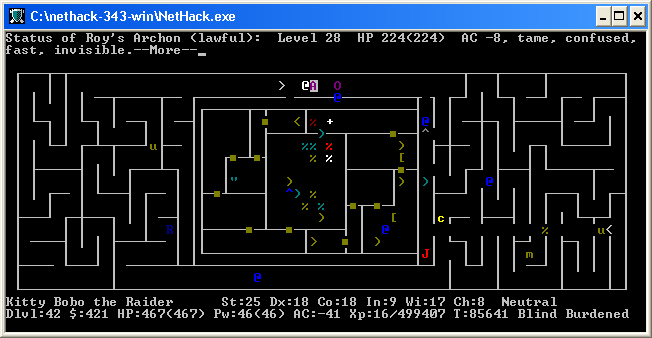 Now, the main difference here is confusion. You didn't specify whether the attacks continued after your stethoscope results came negative, so it is plausible that on the turn which you checked your pet's status, the confusion wore off. Quoting from the Confusion wiki page:

Also on that page there are the possible reasons a creature might become confused. The only possible ones are the following:

In my game, most creatures at first sight either drink whatever potions they have or they throw them at me. Although most of them were paralysis, I believe if they had potions of confusion, they would throw them either at me or at my pet.

Also, after checking the wiki, I found out that the umber hulk's gaze attack isn't resistible (as it isn't a magic effect).

After I noticed, I began checking the status of the pet each turn (as possible, since it is a very fast pet) and after 27 turns passed, the pet regained his composure. I have a certainty that he didn't have an unicorn horn (because I polypiled those that I've found at Orcus' Town) or a lizard corpse (because I didn't find one in Gehennom).

My explanation is that either the RNG God had pity and decided to cure your pet at the precise turn you would be able to use a stethoscope on him or the pet had one of the items that instantaneously cure confusion.

Just a guess: do you have the Aggravate Monster property?

While I don't know of any examples, it's possible that Archy could be frightened into hitting you. So be careful playing that tooled horn. Again, just a guess.

Other things can cause monsters to be aggravated with you: shriekers doing their thang, drinking a cursed potion of invisibility, or even high level spell-casting monsters (like a demi-lich, or The Dark One, your quest nemesis) can literally cast an aggravate monster spell.

Let us know if you figure it out or the condition changes. An angry archon is a very bad thing (tm).

10
Shops, theft, and your pet(s)
3
What is a good mid-game pet?
18
Is there a substantial difference between a pet cat and a pet dog?
1
Will player style magic resistance help a pet resist conflict?
1
Wishing to equip my pet Archon
8
Will a pet arch lich still be covetous?
2
If a pet has/uses an artifact, are the benefits of that artifact conferred to the pet?
2
How can I confine my pet rock mole?