Which cards can affect a stealthed minion?

In Hearthstone, there are several cards that have stealth, which means you cannot target those minions. What puzzles me, is that some AoE cards seem to not affect some stealth cards. Did I run into a bug or is this intended and what are the combinations that affect each other? 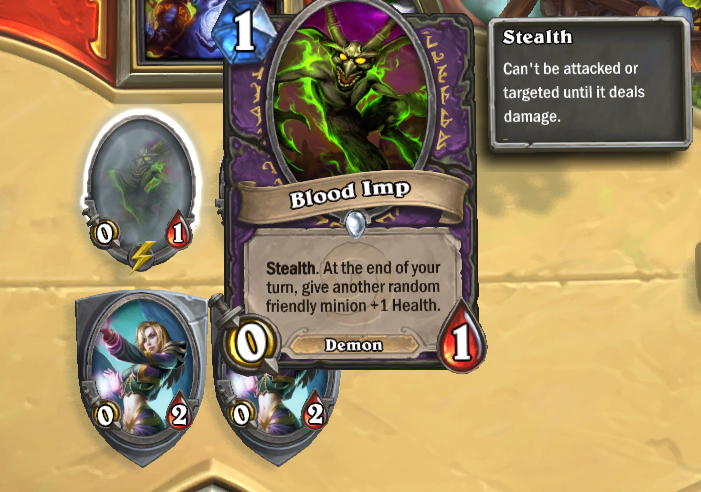 While the minion on the screenshot was affected by my Arcane Explosion, I ran into other minions that are not, but I don't remember them all.

Stealth cards cannot be directly targeted by your enemy. This means they can't target it for attack, or cast a spell on it, or use a targeted effect on it.

Stealth does not affect you; that is, you are able to target your own stealthed minions at will.

Similar to Stealth is Untargetable (for lack of an official term), an effect shared by Faerie Dragon and Laughing Sister. Untargetable minions can still be hit by untargeted effects. Unlike Stealth minions, however, they can be targeted by minion effects (Elven Archer's damage, Spellbreaker's silence, etc.), but not by the player that owns them.

As for your claim that some minions were not affected by Arcane Explosion — is it possible that they had Divine Shield or were under the effect of Commanding Shout?

6
Which mind control effects allow you to attack?
21
What happens when taunt is put on a stealthed minion?
16
What are the weaknesses of the Miracle Rogue deck?
4
What are the game-turning cards or combos for each class?
14
What happens if Baron Rivendare and Dreadsteed die at the same time?
21
Given a Hearthstone card collection how to determine the optimal card pack to purchase?
4
Is there a difference between "summon" and "resummon"?
3
Hearthstone strategy problem, kill with hero ability or minion, secret involved?