How do I get my NPCs into my sky house?

I recently built a sky house in Terraria. After I did so, a bunch of NPCs appeared as expected. The Guide took up residence in a room in the house, as well as the demolitionist.

However, the Merchant and the Nurse are just wandering below the house, close to the rope. They have rooms allotted to them according to the housing panel, but they just don't seem to be going up.

I tried walking far away and waiting a bit, as well as saving/reopening. In both cases they still come out at the bottom.

How do I get them to get into the house? 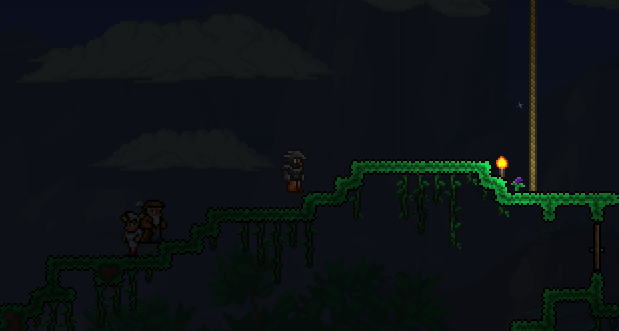 I got them into an unsafe area and lured the zombies to them -- after death they respawn into their own homes.

Alternative methods of murdering NPCs include dropping a bucket of lava over them, and killing them with the Rotten Egg (may require equipping armor and accessories with ranged damage bonus to increase damage done since Rotten Eggs have very low damage)

Rather fun way of solving a problem :)

Get out of the way for longer than you already have. If zombies come out, you're in luck. They'll spawn back in their houses.

Have you tried going far away at night? Worked for me. If not, try killing the NPCs. They most likely will spawn in the house. If not, (again an if not) then there must be a glitch or something. Sorry if I'm no help at all and I'm making a total idiot of myself. All I have to say

If you leave the world and re-load they will be in their designated housing. This way you don't have to wait for them to re-spawn.

70
How do I build a house for my NPCs?
10
Why won't an NPC go into his house?
6
How do bound NPCs spawn?
9
How can I stop newly arrived NPCs from falling into my lava moat?
2
NPCs claiming wrong house
5
How do I get my NPC back into my house from down a cave?
2
Would removing blocks under my terraria house make my house valid for npcs?
3
Can't get Dryad to move into house in mushroom biome for 3ds
1
Wait Time for NPCs to Move In