Which method gets more Adam?

Considering that every (i think) 3 Little Sisters you save you get a present of Adam at the Gather's Garden, if you went though the entire game and Harvested all/Saved all the Little Sisters which method would give the most amount of Adam by the end of the game?

The math was done in this topic, resulting in more ADAM overall if you save all of the Little Sisters:

It's assumed that when the game states that you get more ADAM from harvesting, they probably meant when you get the ADAM immediately after either saving or harvesting the Little Sisters, rather than not taking in account of the rewards that are given when you save them.

EDIT: Formatting in the quote got wonky, just fixed it.

While choosing to rescue the Little Sisters provides less ADAM in the short term, after each third saved girl, a gift will be placed in a teddy bear at a Gatherer's Garden which contains 200 ADAM as well as the addition of some unique Gene Tonics and supplies. The total ADAM received from rescuing three Little Sisters is therefore 3×80 + 200 = 440 ADAM, which is only 40 less than the total of 160×3 = 480 ADAM received from harvesting three Little Sisters. The choice therefore has little difference in cost.

Harvesting represents the short-term solution: Not only will the player end up with more ADAM than if they had saved the Little Sisters, but the first few levels of the game will be much easier to achieve. Coupled with the potential for sampling many different Plasmids and Tonics at once, this is the ideal strategy for someone playing BioShock for the first time. However, the drawback is that this will lead to the unhappiest ending to the game.

Saving, on the other hand, is a long-term investment. While it is harder to survive the first few levels with this path, it ultimately offers greater rewards. The Tonics and Plasmids the player receives are among the most powerful in the game and cannot be obtained otherwise. The ADAM gap between a Harvester and a Rescuer (280 ADAM in total) is also compensated by these bonuses. However, these rewards may or may not suit one's play-style, so it is recommended to either look up the rewards individually or play the game as a Harvester first. This option is recommended for experienced players or for those who have already played the game. This strategy will also unlock the happiest ending in the game.

Mixing both strategies is not excluded. By both harvesting and saving the Little Sisters the player offers themselves a generous dose of ADAM, with unique Plasmids and Tonics to boot. The player only gets their rescue reward after saving three Little Sisters, so if one is feeling scrupulous do so in blocks of three so as to get that reward as quickly as possible. This strategy will never get the player as much ADAM as a Harvester, nor as many unique rewards as a Rescuer. However, with efficient planning and harvest/rescue alternation one can combine the advantages of both paths, making one's life easier during the first stages of the game while being able to use a Big Daddy as a bodyguard.

...the more sisters you save, the more you're rewarded with ADAM and items by another character in the game. So which way gets you more ADAM?

One of our forum-goers, twinky, decided to find out. He graphed the difference between killing and saving the sisters in terms of the ADAM you receive, and he found that while at the beginning the bonus for killing is great, towards the middle and end of the game the bonus packages you receive for saving the little girls levels out most of the short-term gain. 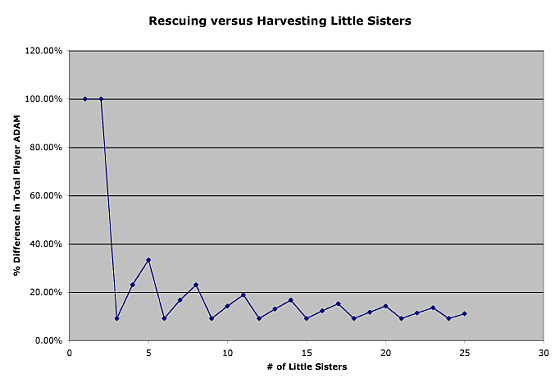 While this decision does affect your ending, and whether you can sleep with yourself at night, if you're worried that by saving the little sisters you will be missing out on the ADAM needed to upgrade your powers, don't be. The game will take care of you either way.

Not a huge difference, especially considering the usefulness of the gifts and the fact you can use the extra Little Sister exploit on three levels - Neptune's Bounty, Arcadia and Fort Frolic to get an extra 240 ADAM if you want to save them. Also, because the game counts the extra Little Sisters towards the gifts AND ending and after the 7th gift/21st Little Sister the ending is determined, you can apparently save 21 girls and after you do that harvest the three left and STILL get the good ending, if you want to do that, though I never have.

Not the answer you're looking for? Browse other questions tagged bioshock or ask your own question.

19
Techniques for Playing Wrench Tennis Effectively?
18
Will killing a Little Sister change the game's ending?
12
My Little Sister is dead, should I get a new one or start over?
2
How can I carry more ammo in BioShock?
0
Plot hole in Bioshock (Remastered Version)?