What is the best way to obtain a ridiculously high score in Goat City Bay?

So there's a new map out for Goat Simulator. New areas to explore, new civilians to terrorize, and most importantly, new ways to rack up sicknasty point totals.

Previously I had asked for the best way to rack up points on the original map. Now, I'm asking if there are any wonderful tricks to abuse on THIS map to get incredibly high scores.

Note that it doesn't necessarily have to be better than the tricks in Goat City, but it should be effective enough to complete the 'Knocking Hard' goal by itself, as in the previous question.

Maddux is on the right track suggesting a big jump with the "angel" mutator. I've got some additional tips that should help, though.

For quickest results, start a custom game on Goat City Bay with the Angel Goat mutator turned on.

There are several high points on this map you can start from:

From one of these places, jump off towards as much land as you can - it's critical that you land on the land and not in the water.

Now, hold W, A, R, and the right mouse button and you ought to start doing one super, super long trick. If you need to adjust your trajectory, release the right mouse button and use W/A/S/D to move yourself. You can release the R button for short periods to increase your downward momentum, if you've been in the air for too long. Just make sure you're holding it as you start to land.

As you get close to the ground, release the right mouse button while holding the rest (W, A, and R). This will auto-level you so that you land on your feet. If you've been in the air tricking long enough, you shouldn't need to do any other combos. One jump was enough to max out the score totals for me. 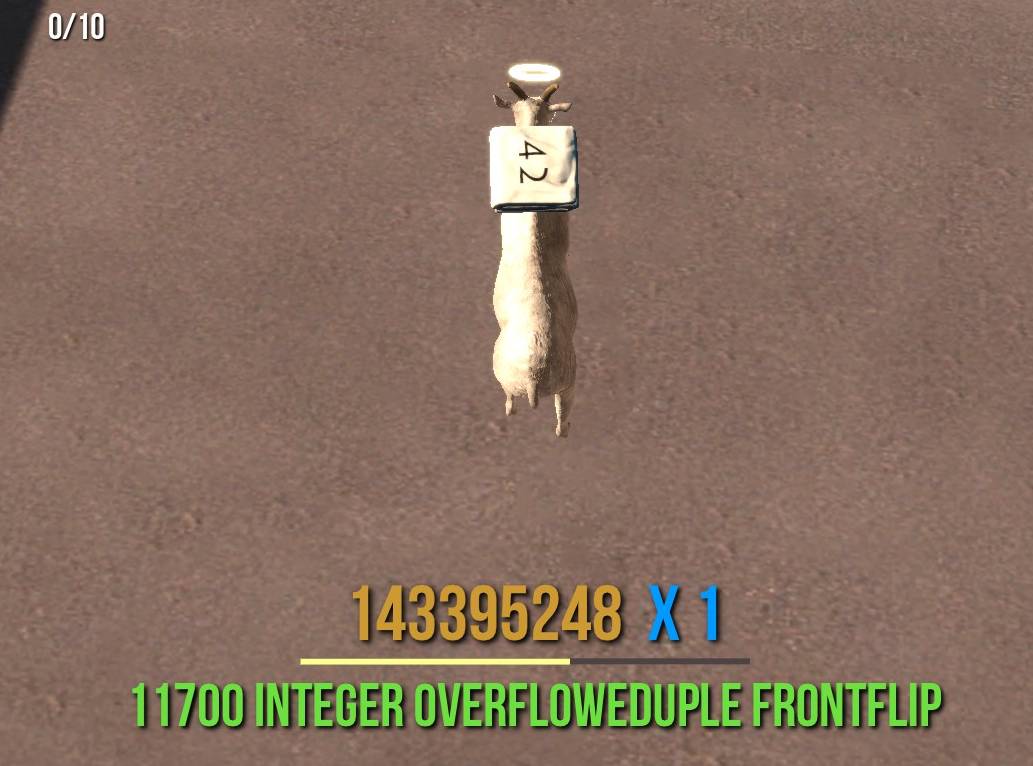 That's 143 million points, with no combo bonus or anything. Presumably you could get some insane points by kicking your way through a house or shop, or doing a wall run or some additional tricks of some kind. It's completely unnecessary, though.

If you want even more points, lick one of the following objects:

If you're actively licking one of these objects while you do your tricks, you'll get a bonus, just like you did while licking Goathenge in my previous answer. There are likely other things that would qualify, but these ones are easy to describe.

Go to the Putin Hotel and go to the roof party. You have to have angel goat to do this. To unlock him, you must not hurt anyone for 5 minutes straight. I recommend just sitting there for five minutes.

Once you have him and are up there, go straight across from the elevator and get on the slanted roof. Now jump, but make sure you press R at the top of your jump, so you float slowly.

While doing this, do as many flips as possible. If you don't know how to do this, hold down right click and press the WASD buttons repeatedly. Once you think you've done enough, make sure you're upright and carefully tap R and land safely on the bottom. Once landed, build up a combo by doing other tricks in the nearby area. The points you get combined with the large jump and number of flips you did should get you a lot of points.

If you play on the console versions, it is much easier to do flips in midair, as the joystick can be moved quickly and accurately. As any unlocked mutators can be applied at will on console, the best combo for score and air time is the Feather Goat (Ostrich), the Angel Goat, the Double Jump Goat, and the VR Goat (Double points woot). If you follow the other tips on this page, you should have no trouble getting absurd scores.

The best way to get points is the casino in the back of the hotel. You press the pow button and it gives you somewhere around 1000000 points :)

Not the answer you're looking for? Browse other questions tagged goat-simulator .

13
What is the best way to obtain a ridiculously high score in Goat Ville?

13
What is the best way to obtain a ridiculously high score in Goat Ville?