My wife and I have two xbox 360s, and recently hers (which is also the oldest) started doing some strange video glitching. I have a dlna server set up in our house, and two days ago, while watching a movie through our dlna server to her xbox, the video simply froze. The audio continued to work, and we could hear our controller input working (pressing the jewel resulted in the proper noise, etc.). Let me be clear, the video froze, it did not go black. We just figured part of the xbox software froze, restarted the xbox, and it worked fine.

The next day, same issue happened while watching something over dlna, however, this time, restarting the xbox did not work.

Now, when I boot the xbox, the video freezes after a few seconds of the startup splash screen. It goes through all the audio/music of the boot up process, however, the controller is unresponsive (pressing buttons/joysticks does not result in any audio).

None of these have resolved our issue. Coming from a software developer background, this doesn't really look like hardware failure, only because it is both displaying some video and audio, and I'm more thinking it's some sort of software problem that we triggered.

For some background, we've been using my dlna server for about 6 months now, and had no problem until now, so I'm not 100% sure the streaming caused the bug, it's just what we have been using that xbox for recently, so it's just happenstance. We've used the other xbox for streaming, too, and haven't had any issues.

Has anyone else encountered this video freeze and unresponsive controls on startup, or while using the system video player? Any suggestions for a fix?

Edit: Here is an image of how far it gets in the splash screen (taken with my phone): 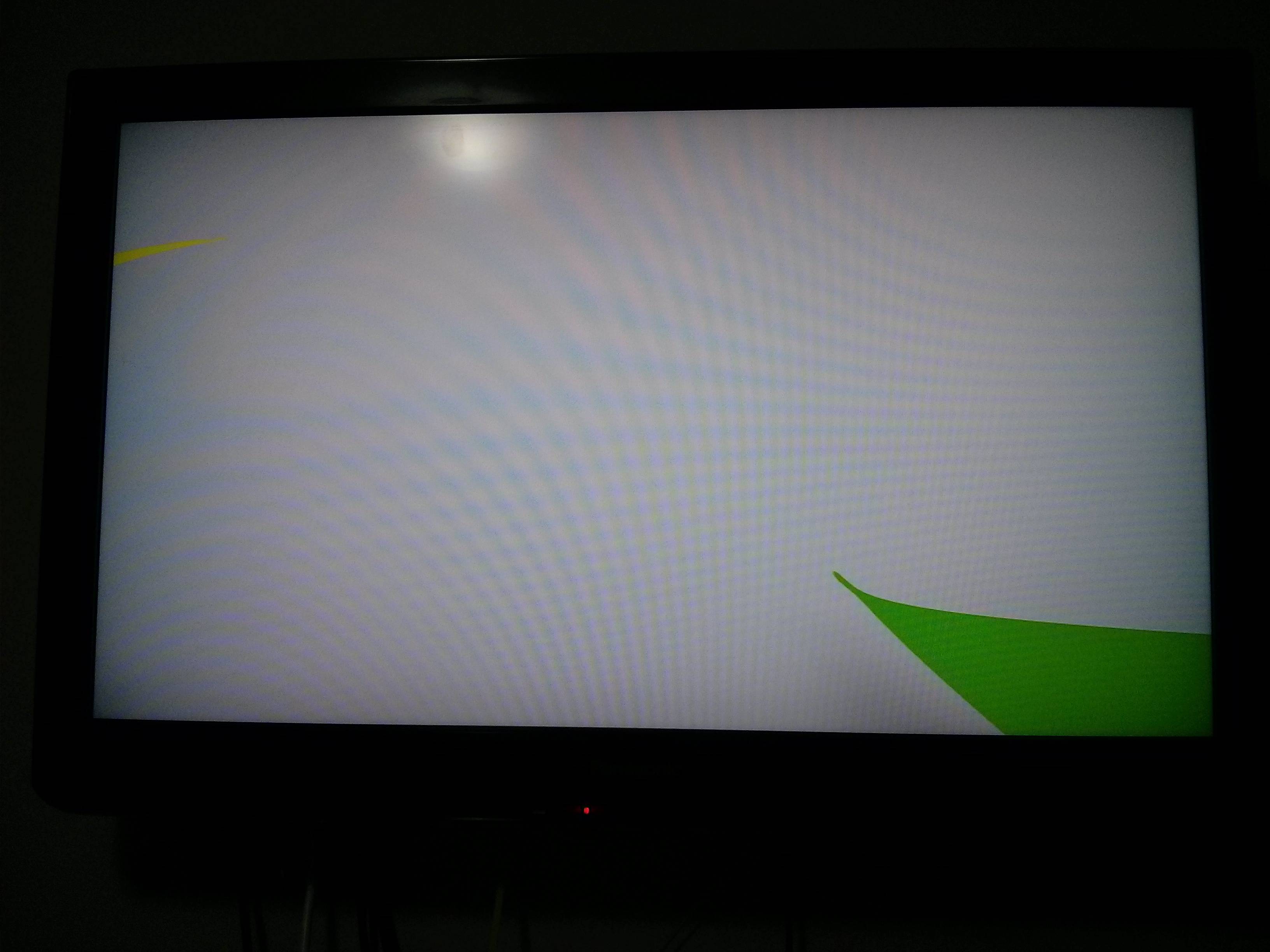 I realize that this is four years old but maybe it will help others.

When the Xbox360 starts to get graphical glitches like that where it sounds as though everything is still working and it is only the video that is affected, the culprit is a chip on the mainboard which is experiencing a bad solder connection. This is NOT like the regular RROD that is caused by the chips under the heat sinks; this chip is much smaller and is usually located somewhere near the video cable plug. Additionally, it is easy to test to see if it is this chip; just turn on your xbox360 with the case open and push down on the chip with your finger. If the glitches are affected when you press, this chip is the problem. You can easily fix this chip using a hot air gun and some tin foil to shield the rest of the xbox. Keep the gun on the chip, moving in tiny circles, until the solder is melted. (30sec-1min?). Let it cool, then see what happens when you boot. Should be fixed. This is ONLY applicable when the video output seems to be the only thing affected, as in your case. Sorry I do not have a chip name or pictures. I'm just writing this off the top of my head and since the question IS 4 years old no body would probably want them anyways. :)

Whenever an XBOX 360 starts to freeze upon bootup or within just a few minutes of gameplay it is usually an indicator that your unit is about to get the dreaded Red Rings Of Death (A.K.A. - "RROD"). We've repaired many systems for this issue.

We highly recommending seeking out a reliable game repair shop that offers a reball service with a good warranty. Always ask to see that machine the shop will be using to repair your XBOX 360. If all they have is a heat gun of some sorts, i highly recommend that you don't choose to get the repair performed at that shop.

I had a launch 360, and it started doing the same thing in 2011. It took about 4-5 months to go through the entire process you've described, and no amount of compressed air, or any other troubleshooting could save it. I would compare the cost of reball service with the cost of replacing it, and go with whichever seems more advantageous to your needs.

My xxbox 360 started doings those things just before the Red Rings Of Death (RROF) apeared. I suggest you (if your xbox360 still has warranty) to call to the microsoft offices so the can change your xbox, that was what i did. Later it happened again and i had no warranty anymore, so i took my xbox to a hardware shop so they could fix it, that can be the best alternative. There's a do-it-yourself alternative: Unplug everything except from the power cable, cover the fan with chopsticks, wrap your xbox arround a hot blanket and turn it on, 15 mins should do it. Have luck!

maybe your issieu is solved but maybe not i had the same proplem and i stil own my original first first xbox 360 there is two thing that seemed to do the trick for me first and easyest your video input cable should have 6 cables now if this is the case simply switch the litl button switch on the cable to hd or hdmi, power on the xbox, you wont have any video at all, while the console is on switch the cable back to the original stance, the console should restard and it should have worked but its only temporary

seccond the best thing to do strip the plastic find a link on youtube how to do it and only ceep the iron of the console itself it gives the console a huge life boost since it will never go hot again you only hear the cd tray spin the console self is mouse quiet do not remove the white plastic going from your fann to the big iron block it needs the cooling airflow from the fan !!!ATTENTION!!! pay attention when removing the plastic do not force it off you will break it. unplug your powwer source when removing the plastic. when you rewire your power source USE HANDGLOVES!!! chance of an electrick shock when touching the metal casing 9 out of 10 you will get shocked!!! do not touch the consoles heat pack thing the big mettal block in the middle of the console can get up to 60 to 80 degrees celcius and under all circomstances do not let children power to console on or of at the console itself use a controller same for switching disks chance of electric shock when touching the metal xbox casing

if your console still freezes and you stripped the console look at the cd tray there is two cables carefully lift your cd tray and see if both cables are still attachen to be shure give them a gentle push do dot force it you will either brake your cable the cd tray or worse you snapep your giant green print plate in half so do not use to much force.

another trick wich i do not reccomend have not tested it myself its hear say from my brother put it in your fridge for five to ten mins so all the oil and fluids in the console can cool down making the moniculles take their original positions then when the console is cold but not MOIST OR WET plug it in and it could work YET AGAIN A WARNING!!! i have never tested this myself its only hearsay from my brother i do not reccomend this methot at all

!!!DISCLAIMER!!! i do not have expert knowledge of electronics or programming or any other electricity actions i am not a repair centre i only advice what you could do im not sayying it a magic fix for me it worked and on my friends console two i do not take any responcebility for broken divices only use my advice if you know what you are doing or if you want to give it a go and last but not least my native language is dutch so my apollogies for my english

18
My xbox 360 does not keep my netflix account login information
2
Why does my Xbox 360 controller take minutes to connect?
4
XBOX 360 not booting up after update corrupted files
3
Why is my Xbox 360 not working?
0
How do I get in game sound out of the Xbox 360 to a soundcard if I play via a computer monitor that doesn't have audio output?