If I have multiple bases, which one will produce units?

In Blizzard real-time strategy games, you must click on a building before building a unit. If you have two barracks, the unit you build will emerge from the barracks you queued it in.

In Command & Conquer 3, units are built from an ever-present bar at the side of the screen. If I have multiple barracks and I build a unit from the side bar, how do I know which building it will emerge from? What about when I have multiple bases spread across the map?

Each production structure gives you a separate build queue, under the main queue buttons: 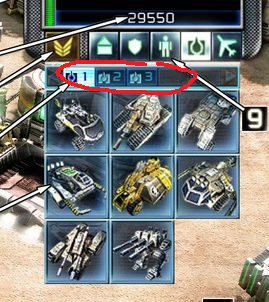 They are ordered based on which ones you build first. This way you can build things simultaneously from every production structure.

This is also how the crane works; it gives you a way to build more than one building at the same time.

This is a major change from previous games (RA2 and before), where each additional production structure made things quicker to build. With C&C3 everything builds at the same speed, but you can build from multiple structures simultaneously.

If you click on a production structure, its build queue automatically appears in the sidebar. So if you're used to the Blizzard-style way of building things, you're covered too.

You are able to assign a certain Barracks (or other unit producing structure) as the Primary structure by double-clicking it (I believe - this is how it was in C&CRA2, at least). Barracks units will come from that Barracks only unless your production speed is so fast that the animation of the unit walking out of the Barracks and into position is longer than your production time (in which case they come out of the closest Barracks to the Primary, IIRC).

Not the answer you're looking for? Browse other questions tagged command-and-conquer-3-tiberium-wars .