What is the optimal strategy for Neverwinter's Sword Coast Adventures mini-game?

The Sword Coast Adventures mini-game is a dice based adventure game. The game contains random elements of die rolls and encounter positions. From what I can tell there should be an optimal strategy. 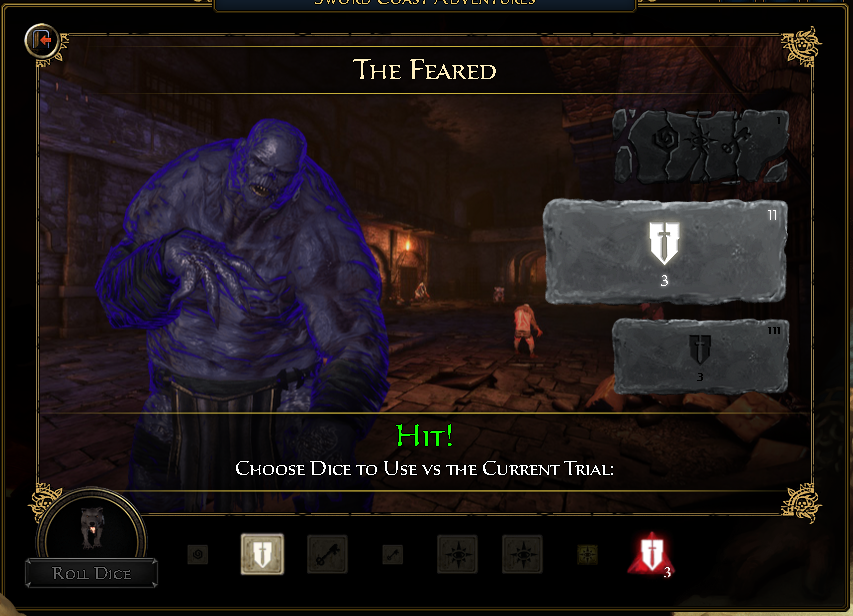 A good summery of the mechanics is available in a dev blog post (with screenshots), or the in-game tutorial (you need an account though). Information on all the die and characters is available on the wiki.

The problem can be split into three parts:

For the first answer, it depends on if you're trying to outright win or just level a companion. Remember, if you leave early, you don't lose anything. If you lose, your companions don't lose experience. So, leveling companions quickly is risk free -- it doesn't cost anything and if you leave on your last life, you don't actually lose anything (other than a little time and stamina, which comes back quickly enough), either.

If you're trying to win, since the encounters seem randomized to me -- maybe they aren't -- it's hard to tell who to pick. I usually go for 3 of my best companions that meet the minimum level and 1 that's lower to push them up faster. I won't necessarily do a 100% clear (there's little point).

For the second one, once you're in, most of the encounter choices are limited, but when you do have a choice I just look at the dice each companion has available and the specifics of the challenge. The bars that show the balance of the various types for each companion can help estimate.

However, one thing I definitely do is lean towards more dice when there are more "stones" to get through. Those tend to benefit from extra dice more than not.

Finally, for your third part: which die/dice to pick.

This is the trickiest part. First, if you have a single dice that hit, you have no choice. This can actually hurt, since it could take out a die that would have made a later stone easier. Second, if you have a miss, there are two types. One is where you have a die available that would not help at all. Take that out first, of course.

Then, I tend to go for the ones that would have the lowest chance of getting any of the further hits I need.

Now, when there's a hit and you have multiple dice to choose from, there is some strategy if you have more things to hit or more stones. I'll usually go for the dice that had the lowest chance of getting this hit and also has the lowest chance of getting another hit. Sometimes, though, there may be a hit on a die where it could help out on anything else, so that one goes first -- even if it's my die with the most sides and only hit a single swirly. That's fine if it would be useless later.

Finally, when it comes to mass shield hits -- e.g. trying to take out either a big group of shields (20+) or several stones with many shields each, I generally only take 3's from the regular dice and 6's from the special dice, unless it either doesn't matter (all 1's came up, but that can finish the round), or only a single came up and there's no choice.

I find it's easier to play on a full browser with a mouse, because there is a lot of mouse-over information that can be used. On a mobile browser, I'll often do easier dungeons just because I can't remember all the specifics and I don't have this information available.

That's how I play... it can get complex, but it's important to remember, that even finishing down to the very last die is no different than finishing on the first roll.

Also, other than a few drops (seals, ad), much of what you can get can come from any encounter, so finishing isn't critical.

Not the answer you're looking for? Browse other questions tagged neverwinter sword-coast-adventures or ask your own question.

5
What is the best companion for a solo PvE Trickster Rogue?
1
For the 'Wayward Wizard' companion what is a Talisman?