How do I push the 'Holy Roman Empire' out of Britain?

I'm currently playing as the Kingdom of Ireland - though I now control Alba (Scotland), Wales and more or less half of England...my final goal is to form the 'Empire of Britannia'; the issue I have is that early on in the game England and the Holy Roman Empire had a few scuffles, one thing led to another and they ended up in control of most of South England.

A picture below illustrates my current position... (the Orkney Isles is Norway) 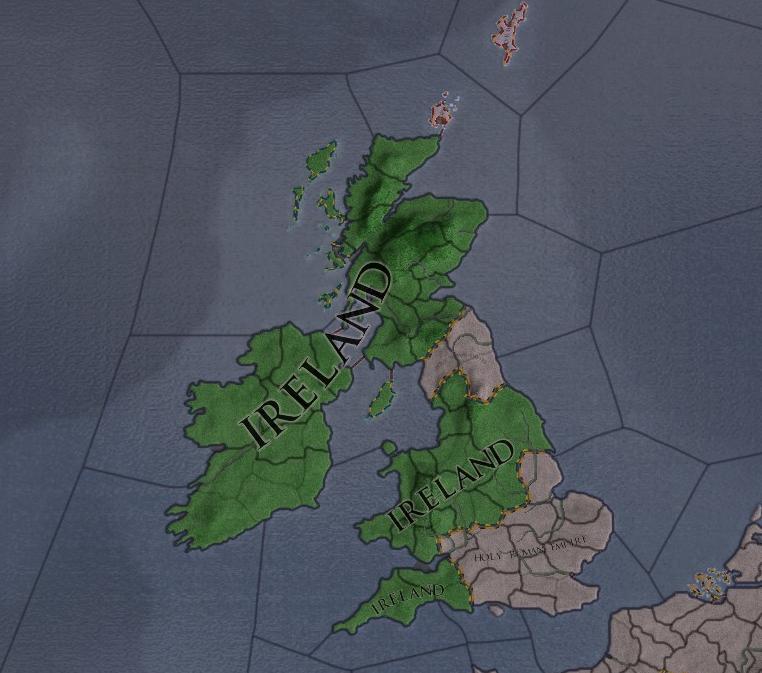 I currently own 75% of the 'de jure' counties of the 80% required to form the 'Empire of Britannia' - I calculated that I would need 4 more counties and so set about building my claims (especially on the northern section). I now have my claims and I am ready to begin pressing them.

...This is where we hit the inevitable problem. I can raise an army of roughly 38,000 men (perhaps 50,000 with Mercs, though only for a short while before I am bankrupted) - however I know from testing that the Holy Roman Empire can easily muster an army of 90k+ which makes it impossible to beat them.

I have begun sowing dissent, assassinating and building alliances with European powers but I was wondering what tactics or plans would be best for taking down this monstrosity - or at the very least getting them out of Britain?

You can change your church/city/feudal laws to allow you to raise more levies.

You could perhaps focus a bit on non-British lands for a while. Get some holdings in France or in the Benelux. This will give you more levies (in the long run), but it might also create problems. In an inevitable war, it means the HRE would have continental provinces they could siege – they would then act as a diversion (less troops for their British invasion) but also a ticking war score for them.

Destroy it from within

Use your chancellor to sow discontent. The HRE is vast, and someone is bound to already have an itch for the Emperor. With luck, you can spark a rebellion for him to worry about.

You might also consider arranging a tragic accident for the good Emperor. Depending on their situation, a well-timed death might end up in a sucession crisis. The HRE is elective, but I guess it still applies.

If you have a few daughters to spare, you could marry them off for beter allies. I would focus on allies that can actually make an impact (France, Poland, maybe Hungary or one of the Scandinavian countries depending on your game).

Become BFF with the Pope, and have him excommunicate the Emperor. This means everybody has a free CB. Also: perhaps you can hire Holy Orders? (no time to check).

This one is tricky with the HRE, since its an elective imperial state, but with a lot of cunning (and probably some mysterious deaths), you might be able to place your heir on the throne. This strategy is more effective with realms that are smaller than yours, since they are more likely to accept your propositions and generally have more foreseeable succession laws.

Be patient (best in test!)

You don't want to fight this behemoth on your own. Wait untill they have other wars to worry about, preferably against powerful opponents such as France or Poland, or better yet civil war. In my game, the HRE would disintegrate every 15-20 years or so, due to internal strife. That would be an ideal moment to strike.

I guess you could easilly defeat any Imperial troops on the isles, the problem would be reinforcements from the continent. So what I would probably do, is to plan a Blitzkrieg on the Isles, and make sure to occupy the provinces in the war goal without losing too many troops.

The HRE will probably not land a 90k stack on British soil all at once. In fact, they might not even have enough sea provinces to raise a navy large enough to transport large armies. So create a doom stack of strong Irish patriots, and place it conveniently close to where you expect them to land – and then pounce their puny 10k armies with your massive 30k!

Rinse and repeat untill they run out of men, or the war goal is sufficiently high.

This answer deals purely with the combat situation.

What are your retinues, and how many do you have? Unlike your levies, you have complete control over the unit composition of your retinues, and can construct them to abuse the combat system to destroy armies multiple times your size (its glorious watching 10k dudes consistently murder the crap out of a 30k doomstack).

In short, an army consisting of many diverse unit types is eligible to RNG a larger number of different combat tactics, and furthermore, those bonuses the combat tactics provide only apply to a small portion of the army and may even provide negatives to other portions of your army. Thus having a focused retinue concentrated in one army (or a single flank of an army if still small) constructed to optimally select combat tactics is a massive force multiplier.

Given that the Irish culture retinue sucks, go with a setup of 4:3 ratio of Defensive:Skirmish retinues (this is the generic version of arguably the absolute best retinue setup of 1:2 Longbow:Defensive under the same theory). This leaves you with a basic building block of 3500 units for 5000 retinue points:

This leaves you in Skirmish only eligible for Volley (Generic Skirmish doesn't really enter in any consideration) and if a Welsh or English leads the flank, Massive Longbow Volley, both of which give considerable bonus to your predominant archers.

I don't want to fill this answer with calculations, but at a minimum, this one block of 3500 are dealing 32k+ damage (2000 archers x 4 attack x 4 multiplier for Volley). A fully mixed army of the same size would probably deal on the order of 7k on average (this number is out of my ass).

Given that you likely won't need to face 90k at once since the HRE will have to ship their army over piecemeal, you can then destroy their armies one by one while minimizing losses due to superior troop mixtures.

Oh, and one more thing - don't forget you can assassinate the leaders of a battle mid-battle >;)

Aside - in a forum game I was participating in, I did run the numbers and gave this advice in response to a bad battle (Horse Archers being the retinue in question):

Ouch. That sucks. Looking at the composition, their army outclassed us slightly. Converting to retinue points, 16813 worth of units vs 16161, with considerably more heavy infantry and considerably less light infantry (which honestly should be worth less than 1 point - they get almost NO tactic bonuses).

We had basically no melee presence compared to them - if we couldn't win in skirmish, we wouldn't win, and our flank composition as shown was not suited to forcing a smashing victory in skirmish either (not enough archers or horse archers, too many light infantry).

Something that may have helped considerably though - keep the retinues in one flank. Diluting them across all our flanks is suboptimal - mixing with other units will drastically decrease their effectiveness. I think it often makes sense to run a smaller pure-retinue flank (as long as it isn't too small). So in this case, I think a 3850/3850/2300 actually might have done better - likely more damage on average than a 3333 mixture due to restricting the available tactics pool.

Here's my analysis of a pure Horse Archer retinue:

While there's no frame of reference for this, I'll just say that their Skirmish on average is pretty good (even without R&A) and melee crap. Mixing in units will expand the possible tactic selection pool, basically making everyone in the flank worse, and you're almost never going to roll Retreat and Ambush.

2
Can you become an emperor?
5
Being Invaded in Crusader Kings 2
5
Way out of the war I offered to join?
1
Reforming the Roman Empire as Catholic
6
If I usurp a King, will all of his vassals swear fealty to me?
4
How does succession work in a tanistry empire?
2
How can I easily consolidate dynasty holdings under one ruler?
9
Forming Roman Empire as unreformed pagan
3
Is it possible to leave the Revolt against Roman Holy Empire?
2
Why isn't my character in line of succession to Holy Roman Empire?