Loot won in a Clan War is automatically stored in the Clan Castle at the end of every war. This includes Dark Elixir. War loot cannot be spent until it has been collected, and if you collect the loot without a Dark Elixir Storage you will lose it.

The Dark Elixir will stay in your Clan Castle until you collect it, or until its raided. I recommend you read this page from the wiki which gives you more detailed information on Clan Castles.

The miniature gold, elixir and dark elixir storages on top of the clan castle represent where the war loot is stored after a war has ended. You can see these in the following picture of a level 2 Clan Castle: 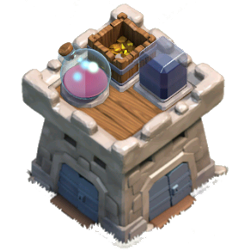 The Clan Castle houses any reinforcement troops sent by your clanmates. Bonus loot won in Clan Wars is automatically stored in the Clan Castle at the end of every war."

Actually, if you don't have a DE storage, you can't get DE from war loot, even if you win the war. This is because there is literally nowhere for your base to store the Dark Elixir. Your Clan Castle loot after the war just shows the Gold and Elixir you won, not DE. Happened to me more than once.