Counterspell and Spellbender together: which one is triggered first?

A quick question regarding the Mage deck: suppose that I'm playing a deck based on Secrets. In a certain turn of the game, I have both Counterspell and Spellbender activated on my side. 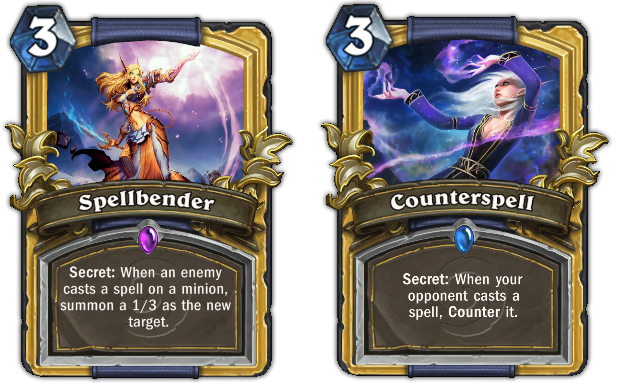 Is there a rule to determine which one is triggered at first? My though is that the first that you played is the first which is going to be revealed, but I'm not sure about that.

As a pratical example, suppose that I'm playing against a Paladin, and I predict - due to the state of the game -, that (s)he's gonna buff a minion of his/her with a Blessing of Kings (+4/+4 at a minion). Can I foretaste a 5/8 on my side? Or the blessing will "just" vanish?

Actually counterspell triggers before spellbender in any case.

I think it's because in the beginning you cast a spell and then you target a minion. This is not an official explanation though.

They will trigger in the order with which they were played. If you played Counterspell first, it will trigger first and counter the spell without triggering Spellbender.

If you played Spellbender first, the spell would target a new minion but then be countered by Counterspell. So you'll end up with a 1/3 minion in your Blessing of Kings case.

10
Why would one player get the Fireside Friends achievement and not the other?
19
Does Doomcaller think my C'Thun is dead if I have multiple and only one is dead?