I've noticed when watching some films that some players are able to do instant and perfect 180 degree spins. For example, I come up from behind and start shooting and they instantly spin and are aiming right at me. Is there some kind of a mouse macro that they could be using for this? Is it just a result of the theater rendering the video incorrectly (I doubt this)?

I can't even move that fast without worrying about accuracy. Maybe if I turned the mouse sensitivity to max, but then I can't imagine aiming under normal conditions.

On a similar note, I also often see players whose aim seems almost mechanical. Not that I think that they're using an aimbot (they sometimes miss), but when faced with several enemies they aim at one perfectly, shoot a few times then the aim immediately "jolts" to the next enemy. Is this just a lot of practice or are there tricks to being able to do this?

Beyond setting your mouse sensitivity high, disabling the "enhance mouse precision" option on the Windows control panel (you may need to go into the Windows panel, even if your mouse has it's own) can help greatly for shooters. What it does is essentially reduce the pointer sensitivity the slower you move the mouse, or conversely speed it up the faster the mouse moves. With that done away with, when you move the mouse an inch in whatever direction at whatever speed, you will always turn the same amount. 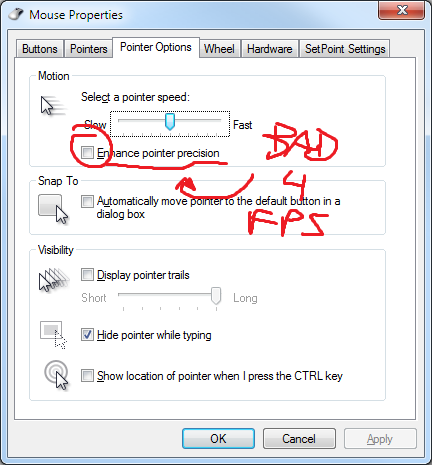 The downside of this is that unless you have a mouse with high DPI, you may not be able to have both the sensitivity as high as you like and have your cursor move smoothly (it may skip pixels)

Also, try fooling around during the pre-match. If you creep up behind someone, try doing a 360 and shooting him. Its very important you build an intrinsic sense of how your mouse's physical movement maps to the cursor's movement. It'll come with practice, and you'll find yourself snapping in on enemies a lot faster.

Finally, if you're taking fire from behind, jump make a 180 and hit he prone button. The second or so it'll take the opponent to readjust his aim on you is often more than enough time for you to get the kill.

Just a whole lot of practice... I recently bought a programable keyboard that did a 180 degree turn but like I feared when getting it, it was tuned for far less superior gamers and my aim reaction time just using a mouse was way faster. I can play max veteran bots on Black Ops 3 and be able to turn and aim as well as they can. Practice is all you need. Don't play scrubs seek a challenge and ye shall overcome.

Not the answer you're looking for? Browse other questions tagged pc call-of-duty-black-ops or ask your own question.

16
What is lost and gained by going prestige?
3
How do I run and dive in Black Ops?
3
Why can I not find servers with ping lower than 180?
3
Is Zork and the arcade zombies the only thing the terminal gives access to in Black Ops?
2
Black Ops: how to avoid the "Set optimal settings" and "Run in safe mode" dialogs?
9
What's the difference between the Red Dot and Reflex sights?
2
Black Ops: list of differences between standard and HC mode?
1
Dark souls PC controls - Help with aiming and switching between weapons
0
In black ops 1 how to unlock all classifed weapons and camo?
1
Does joining an online session with a different aiming mode on PC change anything?