How do I make bandits stop following me on the map

In Mount and Blade (the original, vanilla) I keep getting chased by much stronger enemies (looters, steppe bandits, deserters etc). They prevent me from reaching where I want to go and occasionally catch on to me. Either by chasing me into another group of bandits or by running faster. Usually this ends up in a battle where I lose my entire crew and end up even more vulnerable to these bandits. I'd like to prevent these battles that I will lose with certainty.

What are the requirements for the bandits to stop following me?

What are effective strategies to prevent battles against stronger armies?

With requirements I mean like being out of a certain range, being covered by a city, woods, mountains... whatever makes them stop.

I am aware that the pathfinding skill improves map speed (is this significant enough to invest in it?) and usually all or most of my troops are mounted. I recruit the default warriors that cost 10 denar each.

Here's an example of what I am talking about: 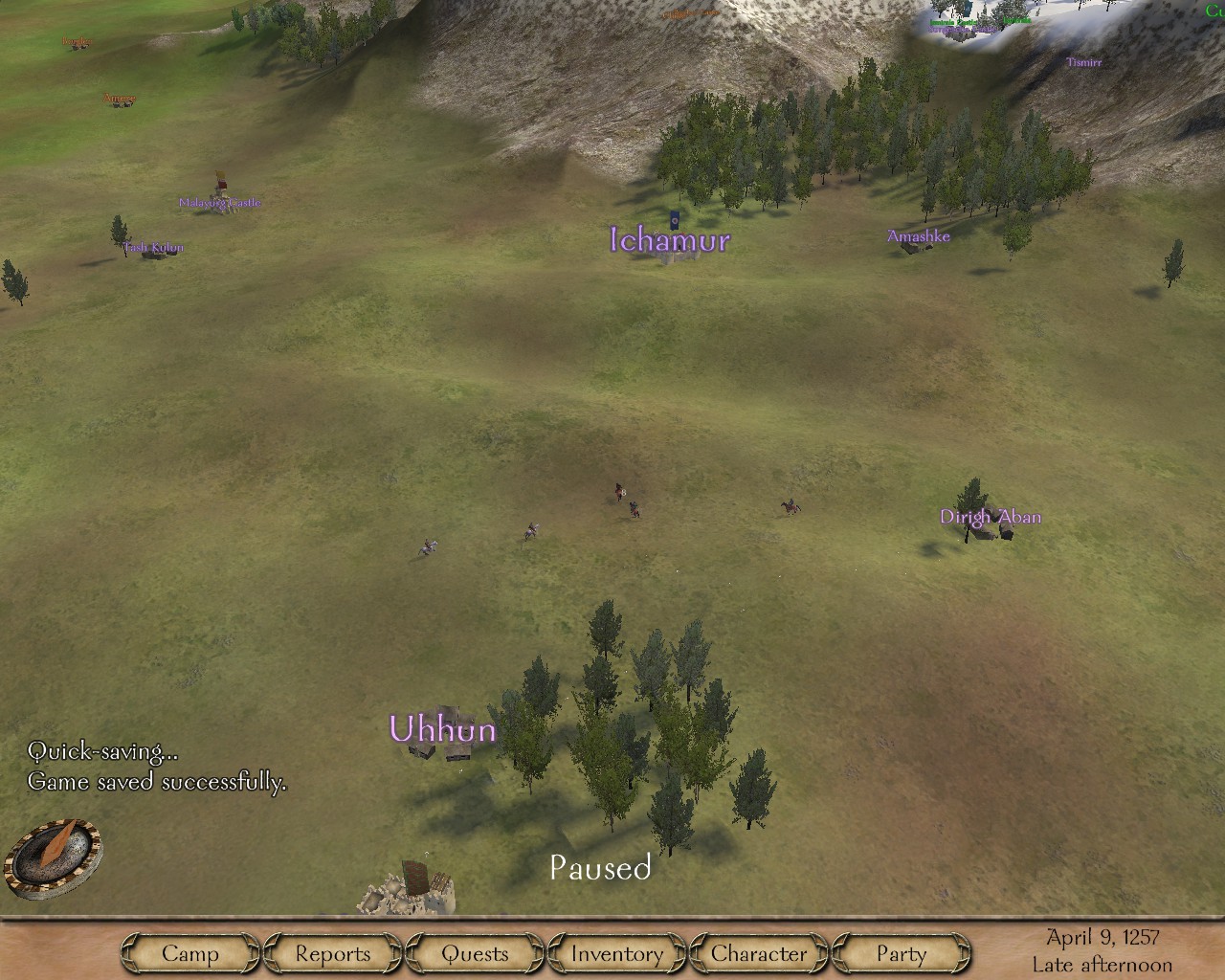 When hovering above these enemy troops it states "following miva" or something similar.

You either need to get faster or you need to get larger. With a party size of 8 (from your photo) you should be able to outrun most things. Give companions horses, invest in the path finding skill (it is worth it) and ditch any infantry troops you're dragging around. If you're carrying heavy trade goods then more horses in your inventory will make you travel faster. As an aside, Nord Huscarls count as mounted troops for travel on the map so they're nice and quick.

Your other option is to have a large enough party so the bandits run away. It looks like the group following you has 11 troops so you wouldn't have to add many troops to your party to scare them off. Personally, with a party of 8 I would almost certainly attack a group of 11 deserters for their loot and to take prisoners.

In terms of other tips - The spotting skill will enable you to see and avoid enemies before they see you so you might want to invest in that. Don't do it with your main character, just have a hero who handles tracking, path finding and spotting. - If you have got a load of bandits on your tail then if you get to a castle or town and wait there then they will disperse and you can move on. - If you spot a lord then head towards them. The bandits will stop following you because they're scared of the lord's army and you can escape.

Its probably a good idea to avoid areas with mounted bandits (Khergit area in vanilla and Saranids too in Warband) until you're a bit further along.

If you have a large enough troop bandits will tend to have "fleeing [target]" otherwise either try and outrun them as after a certain amount of distance they'll give up or find a patrol to stick close to, either the patrol will deal with the bandits or the bandits will avoid you because of the patrol.

If they still follow you, with the patrol nearby engage them, the patrol should join in and it's just a matter of waiting it out for the patrol to wipe them out (probably would order your troop to fall back rather than openly engage them)

Not the answer you're looking for? Browse other questions tagged mount-and-blade or ask your own question.