What bow should I use to maximize my ranged damage?

I really like using a bow in DS2, but my current one seems a little weak. I'd like to do as much damage as possible as quickly as possible. For simplicity, we can assume that scaling in one stat is as good as scaling in another stat (I can always respec), and that I'm using wooden arrows for all of them. Which bow will let me do the most damage? Does the answer change if I use greatarrows instead? What is the best if we only consider bows on the normal upgrade path (Titanite Shards, Chunks, and Slabs)?

To answer this question, it entirely depends on what stats you are focussing on. Scaling plays a big part when choosing the right weapon, in any situation.

Scaling boosts the damage that you do with any particular weapon, depending on which stat(s) and which level of scaling are defined (S, A, B, C, D, E) as @slow_excellence pointed out; S being the best, E being the worst.

This picture shows a boost from strength scaling (shown by the blue numbers): 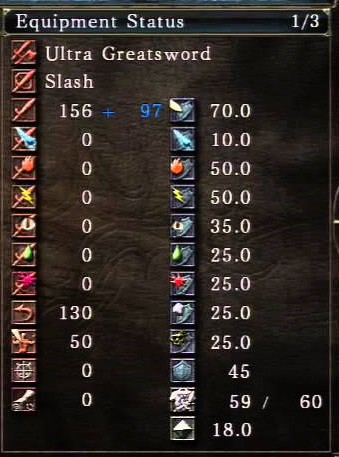 Bows and their scaling stats:

Also important to note that you cannot move while firing a greatbow, unlike a regular bow. This can affect your play style greatly.

It all depends on how you are attempting to scale. If you're going for a strength bow,use the Dragonrider bow,it has a B scaling on strength. If you are aiming for dex,use the hunter's blackbow. I have recently started up an archer and I've tested the differentiation of the bows. I hate greatbows mostly because you can't move with em',making it a gamble if you miss your shot in PvP.

I run 45 dex and 40 str and the hunters black bow+10 has the highest damage excluding great bows. Next highest damage is the longbow+10 then the Sea Bow +10 which is actually my favorite because it has the highest rage out of ANY bow in the game. Also the hunters blackbow has the fastest fire rate as well. So it is definitely worth trying a few out and seeing what you like for yourself as opposed to asking other people what YOU should do with your own build. That's how I figured out what I liked. I just did a bow only run and planned on using the longbow but ended up using the sea bow for primary and fire short bow as a backup. Hope this helped :) ps:don't forget to buy poison arrows

Not the answer you're looking for? Browse other questions tagged dark-souls-2 or ask your own question.

-2
What's the absolute maximum damage potential with a melee weapon in dark souls 2?

10
What constitutes how much damage a sorcery does.
2
Where should I use my Fragrant Branch of Yore?
9
What stats do different damage types scale off of?
2
What weapon does the red specter before Old Dragonslayer use (NG+)?
2
What Soul Memory level should I be?
1
Dark Souls 2: Should I infuse, and with what?
7
What bonfires should I burn ascetics in to get NG+ items or higher?
0
Dark Souls 2: Heavy Build(Alonne Knight Captain Armour) which large weapon should I use?
8
In what order should I play the DLC, in cohesion with the main story?
3
What incense to use for melee build?