No sound in Minecraft

I hadn't played Minecraft in a few days prior to this, but when I fired it up, I had no sounds whatsoever, either in the menu or the game. First thing I checked was in-game, and all audio settings were set to 100%. I then tried the "Hold-F3-and-push-S" thing, and that had no effect. I then deleted the entire .minecraft folder (after having copied my saves out) and reinstalled, and even deleted my Minecraft.exe and re-downloaded it from minecraft.net. None of those had any effect.

I tried downloading a sounds set, with no effect. I looked in the assets/indexes/1.7.10.json file to see what files were there, and verified that the sounds exist. For example, I checked the walking on grass sound, found the file, made a copy to .ogg and played it in VLC, and it played fine.

I rebooted into Fedora and played the java version (same computer) and it plays the sound just fine, so I'm wondering what the issue is with Windows 7.

Anyone have any suggestions?

If you still don't have sound or can't find Minecraft in the volume mixer, try to change the "Mipmap Levels" option in video settings (under "Quality" when using Optifine).

It works for many people and it also worked for me. You can also put it back to your desired settings afterwards. :)

I ended up finding this myself, with help from @Blue_Dragon360, who suggested looking at the mixer.

I looked at the mixer, however minecraft never showed up there. On a whim, I clicked on "Playback devices", then "Configure" on the default speakers icon, and changed it from "Surround" to "Stereo", and lo and behold, it started working. I've had it on surround forever, so I have no idea why it matters now. Regardless, it's working now. Thanks for the suggestions.

Is only Minecraft muted? It is possible to mute per app. To check this, go to your Sound taskbar icon, click it, click Mixer, and check Minecraft. 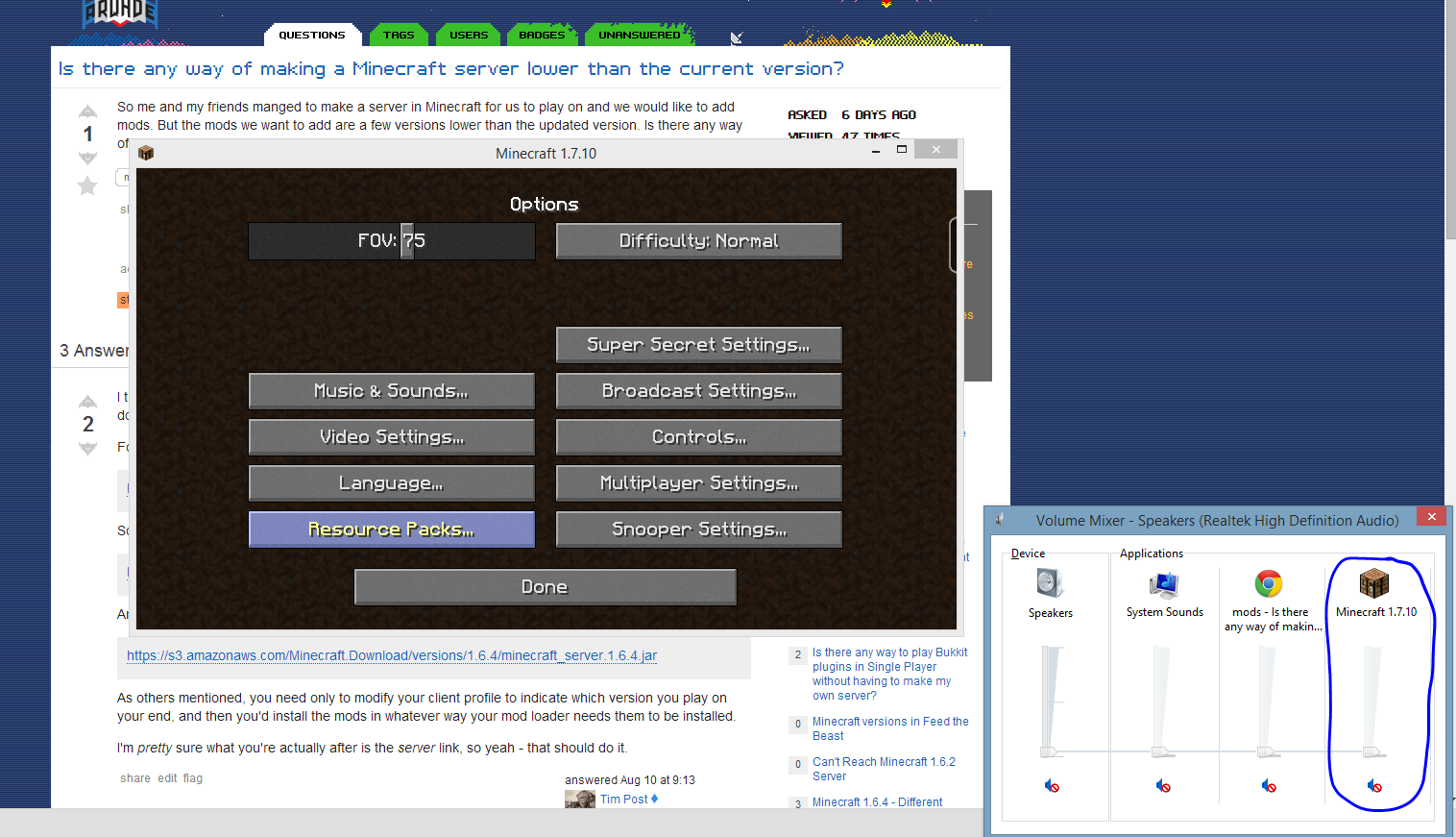 The above answer is Freehand-Circle compliant, in accordance to the StackOverflow FreehandCircle Code, Chapter 47, Section 4, Paragraph 3.1

Adding this answer for others desperately looking to fix their sound issues:

I just figured out my Minecraft sound issue. Spouse and I had sound, but the kids haven't since the 1.9 upgrade. After trying a number of suggested fixes with no luck, I discovered that my Windows Family Safety settings were blocking Minecraft's ability to download the new sound packs. Apparently the message box appears just after the launcher closes and disappears almost immediately, so if you're not watching closely for it, you'll never know there's an issue. I changed the permissions, and voila! Sound!

If you have a texturepack DISABLE it. Some texture packs does not only change texture but some change sound and then they mute you minecraft volume.

It might sound funny, but in my case changing Anisotropic filtering in Video Quality settings unmuted the sound :)

4
Minecraft crashes after logging in: A fatal error has been detected by the Java Runtime Environment
1
Netherrack, paranormal events, and C418-11: prank, mod, expected?
2
/playsound Globally on Server
3
I get sound but no images/graphics on Minecraft 1.7.10 on Ubuntu?
6
New problem with sound in Minecraft
2
Custom Minecraft music randomly stopping
4
Can't Allocate More RAM to Minecraft
1
Minecraft region files corrupted
1
Add sounds to a resource pack, not replace them