How should I build Krieg to prevent him dying a lot?

Okay so I picked Krieg a while back to have some fun within BL2, but now I have hit a snag with this character, he dies a lot!, Allow me to explain.

I have spec'd him in Mania for health regen and damage, he is only level 25/26 and I play him rather aggressively, I use BXR as much as I can for the regen, I also use explosive weaponry.

Here is my current skill tree: 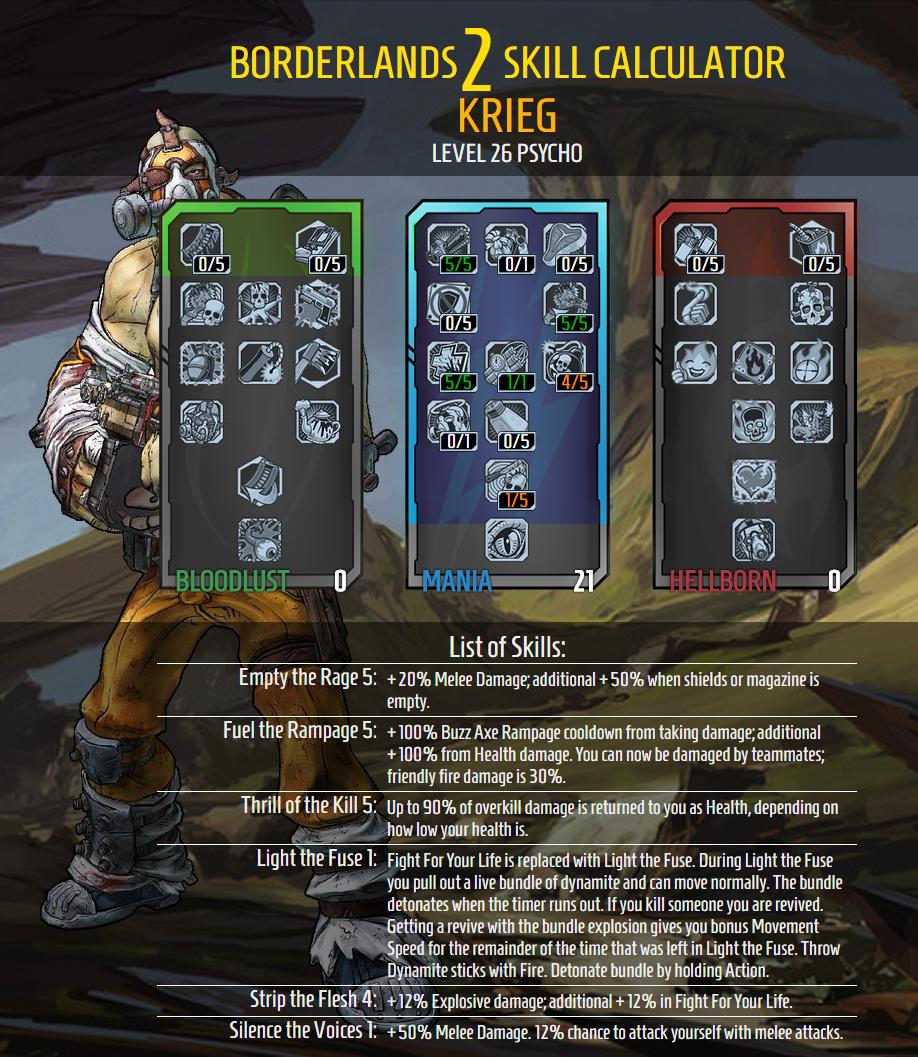 Now is this the reason I am dying a lot? is it due to my level or the way I play? If it is the tree could you suggest a build which will help me, if it is the way I play any other suggestions on how I could change the style of my play style from aggressive to something more suited to Krieg? If its my level, well Of course I need to level up more.

I think you're playing the Psycho the way he's meant to be played, but part of it is knowing when to start rampaging. The key here is whether you can kill an enemy shortly after entering Buzz Axe Rampage. If you're at low health while rampaging and can't get a kill, you might not be able to survive, so make sure you don't wait until your health is too low to start rampaging. However, this changes completely once Krieg learns Release the Beast (more on that below).

Looking at your build, Silence the Voices could be a source of trouble as it causes Krieg to occasionally attack himself on melee. This skill is a bit more useful at higher levels when you can put more skill points into it, so you might want to consider consider respeccing to remove this skill for now. (My current Mania Psycho build, level 32, does not have a point specced in this skill.)

Also, once you reach 31st level, the Psycho gets a lot more powerful with Release the Beast. At that point, you can go all-in, then rampage once you reach critical health without much fear. Until then, a Mania build may be hard to do well and could prove too risky. I personally used a Hellborn build until I reached level 31.

However, you haven't described precisely when you're running into trouble. Is it with large groups of weaker enemies? Is it with fewer but stronger enemies? What types of enemies (e.g. bullymongs, bandits, Hyperion robots, etc.) are giving you trouble? Are there specific locations where Krieg's dying often? I can help you better if you provide more detailed information about what's causing your Psycho to die a lot.

In my opinion, krieg is supposed to die. If you do die a lot naturally, I would suggest putting points into pulling the pin, because when you die it drops 1 free grenade as if you were throwing it and you get double xp from anything you kill. It is a very fun build and disastrous with the contraband.

I wanted to offer my 2 cents as for the advice. Your main problem is only due to learning how to play to his strengths, he can be played aggressively at any level.

1) Max out Empty the rage and Feed the meat. You need as much health as you can get and the extra melee damage is great when your shields are down. 2) Put 1 point into Embrace the pain, Fuel the rampage, Thrill of the kill, Strip the flesh, Light the fuse and redeem the soul. Max out salt the wound and silence the voice next until you get to Release the beast. 3) Grab a shield with a long recharge delay (I have the shield "love thumper"). You will get much more powerful if your shields are always down. Health damage is a good thing for this build, your buzz saw rampage recharges faster, you gain more health and do much more damage.

After that, go nuts. Always focus on the strongest enemy first and avoid all others. If you go down, all you have to do is get a kill to revive and keep going (this is why light the fuse must be paired with redeem the soul and strip the flesh - both add damage and time to your light the fuse).

I have built my guy this way and I go down a lot but rarely actually die. Charge in, activate your power and if your sheilds are down you're a killing machine. When you go down, find the weakest enemy, throw dynamite at him until it dies, which will then revive you. ANY weapon that adds melee damage (usually a pistol) or does explosive damage will also pair well with this build.

Try it out, you'll have a lot of fun. I had to respec several times to figure out all the above but it was worth it.

You can try this build: 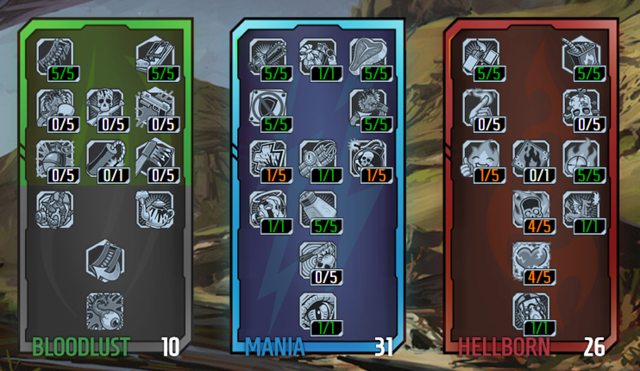 I'm not actually using it right now, but it seems to check out. I am using Hellborn build because I like using guns. But anyone can use any or every build.

Well in my experience kreig does have a bit of a learning curve. When playing alone, it can get quite difficult when fighting a large group but, keeping your cool and picking you targets is key to victory. always try to pick out who the largest threat is and focus him/her/it down with your melee. generally you'll want to take a good explosion shotgun with you since you've got some points in strip the flesh. I guess it goes without saying that light the fuse will be your friend.

As kireg you shield will stay down longer so try using shields with fast recharge times instead of high capacity not to mention spike shields can be useful since more often then not you will be in melee range and your enemies will likely try to melee you. Nova shields can also help since the will cause damage in wide area around you.

This might sound counter intuitive but you might want to back a good sniper when playing as Krieg, that way you can take there hp down from a distance then close in for the kill if the situation calls for it. When you shield goes down and your near an enemy that's when i think you should activate your ability, dont wait for you heath to go down by then it might be to late.

20
How can I build Gaige so I don't have to aim?
5
How can I build Deathtrap to make him the least annoying in team play?
11
How does a 'Warlord' turn into a 'Duke of Ork'? How do I prevent it from turning into one?
1
How does Krieg the Psycho's 'Salt the Wound' skill add stacks?
7
How to prevent character model from leaning in front of inventory
3
How do you do Krieg the Psycho's invincibility glitch?