When did Lady Comstock die?

The historical timeline on the rotunda of the Hall of Heroes, states that, in 1895,

A foul band of anarchists are found to be guilty of murdering Our Lady, and a new battle begins on the homefront. 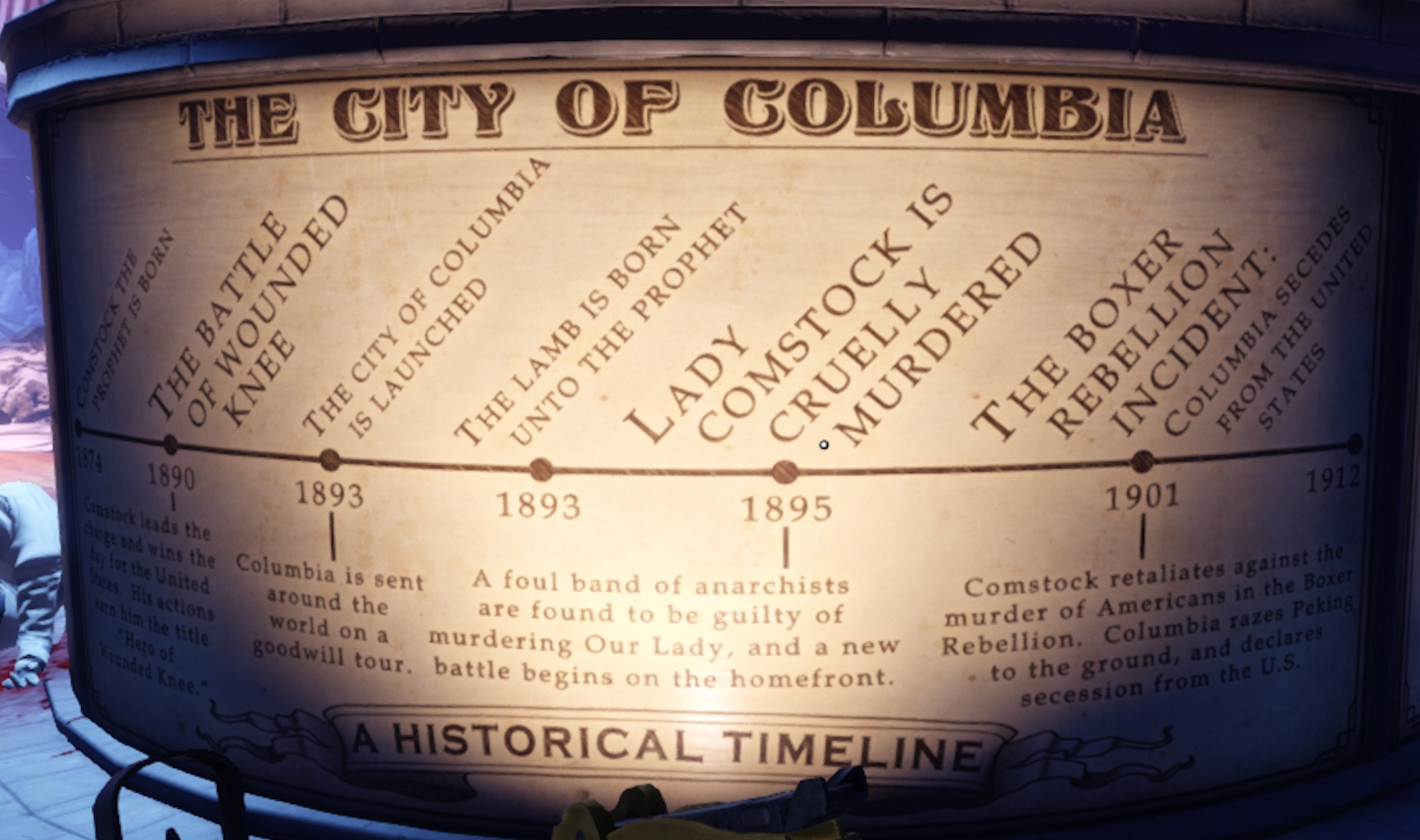 I'm trying to pinpoint when Lady Comstock actually and precisely died, using in-game clues. However, the game seems to contradict itself. Here are the fruits of my efforts, so far.

(See the voxophone transcripts on the IGN wiki.)

The voxophone that was last recorded by Lady Comstock, entitled "No longer", is dated 5th of January, 1895; therefore, Lady Comstock was still alive then.

AFAIK, the earliest reference of Lady Comstock's death in a voxophone is in that entitled "For I am lonely, too", recorded by Constance Field, dated 20th of July 1902:

This is for the Miracle Child. Hello! I'm sorry your mother, Lady Comstock, is dead. (I think she is altogether better than mine.) Since you live there, can you tell me why the tower has been closed? People say it's poor weather, then the pox, then a haunting. If it is a secret, I promise not to tell a soul. -- Your pen friend, Constance

There is a kinetoscope called "A city mourns", which shows Columbia folks mourning the death of Lady Comstock, but neither the device nor the footage seem to feature any date.

I don't remember seeing a date of death on Lady Comstock's mausoleum in the Memorial Gardens. Unfortunately, I can't check this right now, because the game isn't currently installed on my machine.

In the Memorial Gardens, when Elizabeth attempts to use the fingerprint/palm lock the first time, the latter mistakes Elizabeth for Lady Comstock and gives her a warm welcome:

Lady Comstock! How lovely to see you! Wonderful of you to make the journey, especially considering your painful death 19 years ago.

From the opening of the game, we also know that it's year 1912 when Booker arrives in Columbia. So let's do a bit of maths. Even if we assume the game to be set in late 1912, going back 19 years into the past would mean going (at least) as far back as year 1894. However, from one of the voxophones discussed above, Lady Comstock was clearly alive in January 1895. Contradiction!

What am I missing? When exactly did Lady Comstock die?

To be specific, I don't believe they're 'time-jumps' exactly. That implies forward and backward movement along the timeline. I think they're more sideways, alternate realities leading to different actions which cause events to occur at different times.

Eg. Booker had already died in one timeline... So maybe Lady Comstock died at an earlier time in one time line than in another? (It has been a while) I vaguely remember there was a hint that she actually committed suicide?

So it's a possibility that in one timeline she died in 1893, (earlier so possibly the suicide timeline?) and in another she was murdered by Daisy (1895).

Eg. If you look at this (incredibly crude and generalised) timeline I drew up, you can see my argument:

These are mostly speculation due to a lapse in my memory since I have last played, and that you can never really pinpoint exactly what is happening when.

Also I think it is important to note that while there are events of Time Travel in game (First time you see Elizabeth, she opens a portal to modern day Paris; multiple non-interactive tears playing music form the 50s - 80s; The section during the attack on New York), most of the tears Elizabeth opens are sideways jumps through time, rather than forward or backward.

30
How can Booker and Comstock meet?
1
How did Elizabeth lose her small finger?
10
How do I tell when I'm stealing things?
4
What did the helpless captives from the start of the game do?
15
What did the woman in the boat mean when she said "He doesn't ROW"?
9
Who was lady Comstock?
6
How did Albert Fink observe the tears?
15
Why did this NPC think Elizabeth was someone named Annabelle?
7
Do we die when we jump off the edge?
7
When was this quote from in Bioshock Infinite?