I'm worried about my town hall. I have recently upgraded to town hall 8, and since then, whenever I want to attack, I get a low level opponent without much loot.

I've been upgrading though! I got dark elixir drill after and upgraded my cannons after getting town hall 8. Is it possible to bring my town hall to mature? I read on some forums that I have to restart.

So can somebody tell me that is it possible for me to get my town hall back to mature after upgrading all my other buildings to their maximum level? My current XP level is 55 and I have 1300+ trophies.

I wouldn't really classify a base as "mature" or "premature". Even if you upgraded too early, it just means you've got to be a little more careful with spending your elixir. At 1300 trophies, I would have to say that you're doing just fine.

Remember that the difference in Town Hall level will change how much loot you get off other players. Taken directly from the wiki:

I also got to TH8 relatively recently, and I can tell you the difference in available loot from when I was using TH7 was definitely daunting. However it isn't anything significant to fret over. As long as you can maintain relatively decent income, you shouldn't have any issues continuing to upgrade. Remember that even if you maxed out your TH7 upgrades before hitting TH8, you'll still hit a slump as you progress out of early TH8.

The idea behind this strategy is to "snipe" the resource collectors of a given opponent. Many base layouts push the resource collectors outside of all walls, while heavily protecting the storages within the walls. You're looking for those towns with a resource count generally 60k+, nearly empty storages, and high-level collectors that are full. Using the barbarians as meat shields, you would throw down a line of barbarians to attack the collectors, and follow up with a line of goblins, then archers to snipe them from safety. If you decide the barbarians aren't enough, you can throw in a giant or two as extra meat shields.

With this strategy, I can easily nab over a million of both gold and elixer in just a couple of hours playing. If I really sat down and focused on farming, I would say this strategy would easily bring in 1 million gold/elixer per hour.

Here is a popular YouTube video demonstrating a variant of this strategy with just archers and goblins:

Now one thing you'll want to learn is how to lure a clan castle. Many players with a higher trophy count will have troops waiting for you. It only takes a handful of wizards or archers to completely annihilate your giants regardless of what healing you do.

To lure out a clan castle, place a single archer within range of the castle. If troops come out, then place another archer also within range. Keep placing archers until ALL the clan castle troops have come out. Then, place an archer further away from the base or at a corner building, you might need more archers if the first dies. The idea here is to get the clan castle troops out of the way from those pesky mortars and anything else that might stomp down your fragile archers. Once you've gotten the troops out of the range of cannons, archer towers, or wizard towers, place a giant and a semi-circle of archers to mow down the troops. This should clear up any unwanted visitors.

At TH8, you're now more susceptible to those dangerous TH9 troops more than ever. Players at TH9 get level 6 troops, and are more likely to employ heavy use of Hog Ridgers, Dragons, and the occasional balloon run.

Currently I sit at Gold 1. Out of my last 10 attacks, 3 utilized Hog Riders, 1 utilized Dragons and Goblins, and the rest were a combination of barbarians, archers, goblins, and minions. What this means for you is that your base layout is going to need to be able to protect against a wide array of possible attacks. Luckily you'll continue to see more updated base layouts directly at the Supercell forums, there's plenty of people there that are constantly coming up with new base layouts for various purposes. At this point, you'll want a Farming base to minimize loss of resources while trading off trophies instead.

In no particular order of preference, here's a few good farming layouts to help you get started:

The Tempest by Orz: 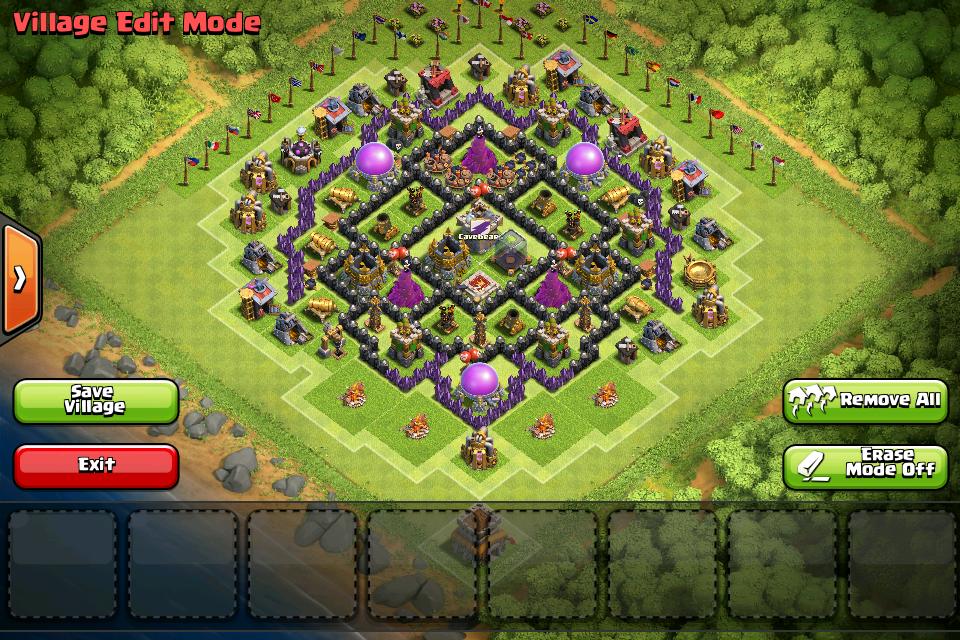 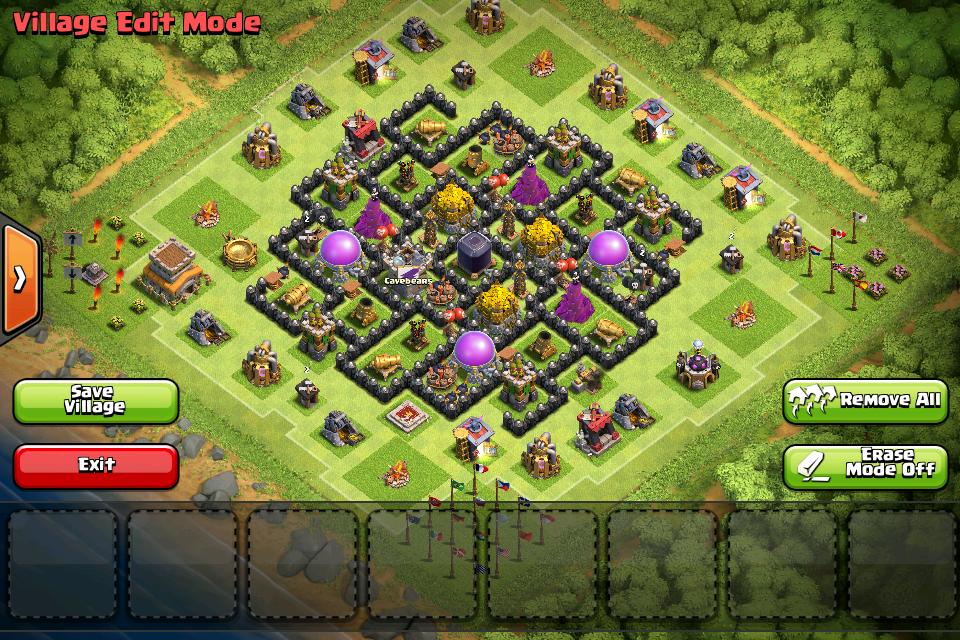 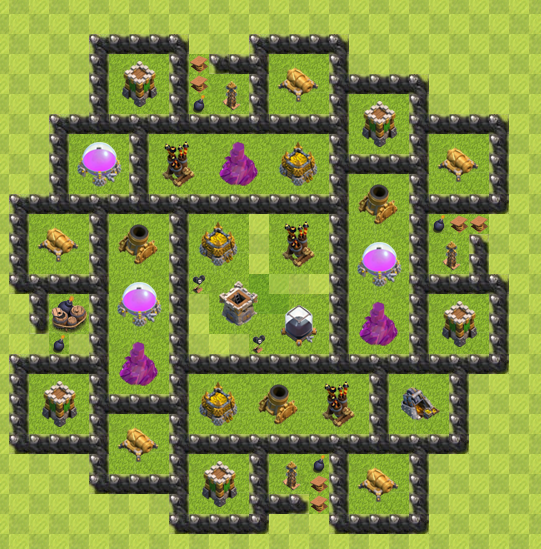 The Oski by Yango: 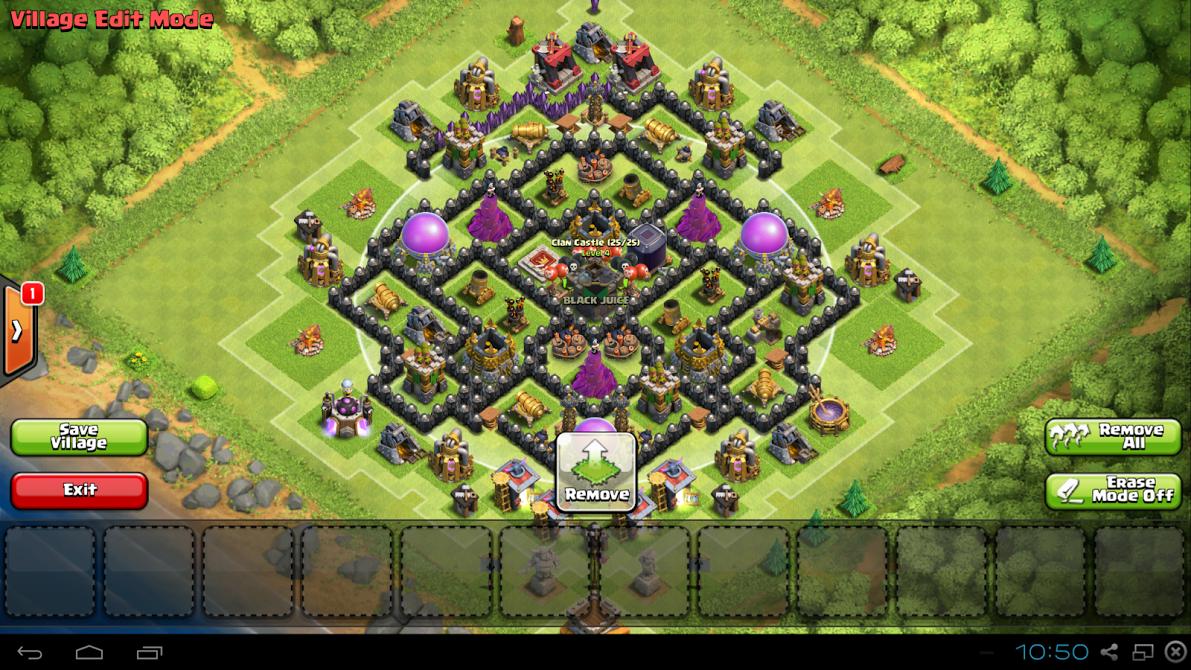 Of course I would suggest always looking around on the forums if you're looking for something different to work with. These bases typically get updated every once in a while as things get improved. Some bases may work better at early TH8 than others, so try out a couple and see what works best for you.

Before edits in your question:

So from what I understand you want to lower your townhall level. Well for a first, if you are getting low loot then go into a higher league than you already are. Also what do you mean mature? Another thing, there is no way to lower your townhall level. The only way to get more loot is to rigorously search through the match-making and hope you get good loot or heighten your trophy count. I also highly suggest you upgrade everything before upgrading your townhall (this includes troops). I also have a level 8 townhall but my level is 67 and am currently at 1600 trophies and my highest was 1800 so I highly suggest taking my advice.

After the edits in your question:

Yes it is possible to "mature" your village. there are two ways:

A: Start farming, drop your trophy count and try upgrading your recourse collectors. After you have a good amount of loot income start upgrading troops and defenses. If you are unsure of what farming is I suggest you google it. I'm sure a good link will pop up

It is your choice which one you want to do but in reality it's all patience and hard work. I did the same thing when I rushed into townhall level 7 and had a hard time but now I'm the second strongest in my clan. Good luck to you on maturing.

6
Maxout at town hall 8, or move on to level 9?
1
How is dark elixir distributed among storage buildings?
2
Upgrade my town hall to level 10
3
Town Hall Grid?