I am currently helping someone find their End Portal on their world with the latest updates on the 360 console. We used the Eye of Ender and it did lead us to a big stronghold with a big library, some stairways, silverfish blocks and a bunch of hallways. We consulted YouTube and the videos we watched confirmed what we should be looking for but we still haven't found the portal. Any suggestions?

You should be able to use more Eyes of Ender from within the fortress to pinpoint the spot where the Ender Portal is. When it floats in place when you throw it, dig up and down from where it hovers and you should find the portal.

What you can do is go above ground, and then get a little height (climb a tree or nerd-pole up a bit), then throw a few Eyes of ender. The point where it touches the ground should be directly above the portal room.

However, if you are still in the fortress, it is best to stay on one level (as best you can) while following the Eyes. When they float down tho the floor, the portal is beneath you. It will be hard to determine if the portal is above you because a) I believe that the portal spawns on the lower levels of the dungeon anyway, and b) there is a low ceiling, so the Eyes will always be hitting the ceiling.

However, if the eyes gravitate to the same spot, it (should) be above you.

You could also try the "X-ray vision glitch" to attempt to see the portal: Set up a redstone circuit that will use a piston to push a block of tnt onto your head. If done right, you shouldn't get any suffocation damage. 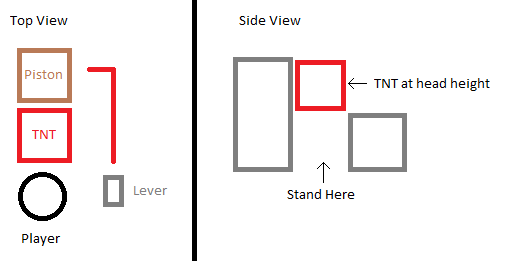 Make sure the redstone doesn't connect to the TNT!

Alternatively, depending on when the world was made (specifically if it was made prior to 'The End' update), it is possible the portal has never even spawned, and the Eyes are only showing where it should be, even though it's not. If that is the case, create a new world with the same seed. The portal will spawn in that world. NOTE: this is only possible if you know the original seed.

Not the answer you're looking for? Browse other questions tagged minecraft-legacy-console or ask your own question.

5
Can you get the Minecraft seed on xbox?

8
How big is the Nether in Minecraft: XBox 360 Edition?
1
Minecraft Xbox 360 1.1 Update Details
2
How to find the End Portal on Xbox 360 minecraft
3
Resetting the End on Xbox Minecraft
2
I can't find the end portal
1
How many Ender Eyes do you need to activate the End portal?
2
How can I find my Minecraft seed on Xbox 360
2
How do I breed Villagers in Minecraft for Xbox 360?
0
Are there jungles in xbox 360 edition?