What are Greater Nephalem Rifts and how do they work?

Diablo 3's Patch 2.1.0 added a new feature called "Greater Nephalem Rifts". What are they, and how do they work?

Ok, so how do I open a Greater Nephalem Rift?

Firstly you need to complete one or more standard Nephalem Rifts to hunt for a Greater Rift Keystone: 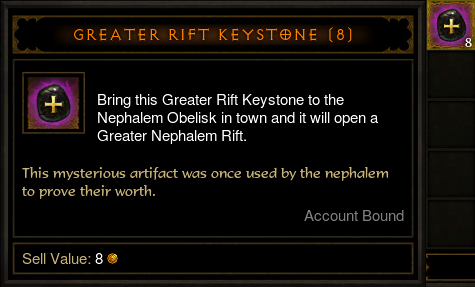 These keystones are a random drop from Rift Guardians. If you are playing in a party everyone in the party will receive one if one drops. Once you have a Greater Rift Keystone, activate the Obelisk in town and select Greater: 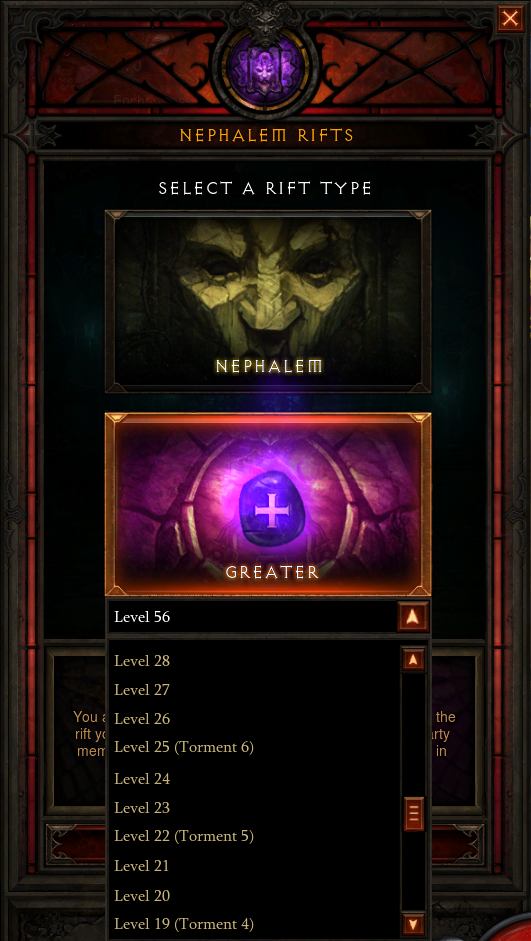 Once you have selected the Greater Rift option, you will need to set the difficulty in the dropdown as shown above. Clicking Accept will prompt each eligible party member to enter the rift. Once everyone has accepted the invitation, everyone is immediately teleported to the start of the rift and stripped of all buffs.

Great! Is there anything I should know before I start?

As with regular Nephalem Rifts, every non-resurrected monster that your party kills contributes toward spawning the Rift Guardian. Packs of Champions (blue) and Rare (yellow) monsters will drop purple Progress Orbs when defeated (with Champions, only the final Champion monster will drop Progress Orbs. With Rares, only the Rare itself drops Progress Orbs, minions don't).

This is a Progress Orb:

Each champion or rare pack of monsters will drop 3 of these orbs which must be "picked up". Each orb grabbed will move the progress bar 1% so it is important to get all 3 each time a pack is killed.

Unlike regular Nephalem Rifts, time is of the essence. Ideally your build would reflect that, giving you as much mobility as possible without sacrificing too much of your ability to kill things quickly. If a particular type of monster is taking a long time to kill, ignore it and move on. You can see your current progress and the time remaining on the progress bar on the right: 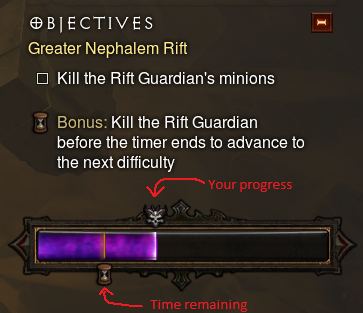 Once the progress bar is full, all monsters immediately de-spawn and the Rift Guardian spawns. Rift Guardians are the same as those found in normal Nephalem Rifts.

Killing the Rift Guardian will award a sizeable quantity of loot, with at least one legendary Gem (note: legendary Gems will not drop if the character has the same gem either in their stash, or in their inventory; this means that you will get no legendary gem drops if you already have one of each... however, putting a gem into the inventory of another character allows you to obtain multiples).

If you killed the Rift Guardian before the timer expired an NPC named Urshi will then spawn and allow you to apply a total of 3 attempted upgrades spread over any legendary Gems that you have (they can be in your stash so there is no need to carry them with you). Note that these upgrades have a chance to succeed based upon the level of the current Greater Rift compared to the current level of the gem you are seeking to upgrade:

Once you have chosen, the rift is complete and you can safely exit the rift.

There are several key points about the greater rifts to keep in mind. This is what I have learned so far from clearing up to level 33 solo.

23
Nepha-what now? What the hell is a Nephalem and why does everyone keep calling me that?
11
What are the hidden effects of the nephalem valor buff?
10
What is the point of Nephalem Rifts?
7
What determines how many blood shards I get?
4
Are there any constants in Nephalem Rifts?
8
Are Nephalem Rifts endless?
14
Where and when can Treasure Goblin rifts appear?
7
What's the benefits of doing Adventure Mode/Bounties compared to Rifts?
5
Will ranked and unranked Greater Rift Keystones convert to new Greater Rift Keystones in v2.3?
5
What are the benefits of the new torment levels?