Why is it always better to attack with a concave, even for equal units?

This is related to this question: Forming a "concave" with your army

I have seen many pro casts where a concaved army beats an equal but clumped army. It's seen as a universally good thing. The answer to "why" is usually something like:

However, that doesn't make any logical sense to me. Consider two armies of 20 marines. It doesn't matter who has the arc, 20 marines shooting another 20 marines is going to be theoretically even. As long as both our entire armies are firing, it will be even, no matter what geometric shape they are in.

The response to this is something like, "well if you have 20 marines clumped, there will be a group in the center who are not firing". But my reply is that, unless the arc is HUGE (>180 degrees), you can simply move your clumped marines a few steps over and now they're all shooting. I would even say that move distance is less than the distance your opponent had to travel to form an arc around your army, so the clumped army gets the theoretical advantage.

I am not talking about situations where AOE damage plays a role, that scenario is obvious.

So, is there something I'm missing?

This is best addressed by example:

In the second example in this video, a ball of marines walks into an arc of marines. You'll see that the game AI causes the ball to attempt to make an arc as units will not get closer than they have to get to do damage. If you force the ball to move in farther instead in an attempt to get them all in range first, you will be taking damage the entire time you advance into that concave and you end up the loser.

Try it yourself with the SC2 Unit Tester. I did so myself just to validate what I assumed would be the outcome, and I was correct: 25 marines in a ball (red) vs 25 marines in a concave (blue) resulted in the concave (blue) ending with about 14 marines on average. The initial damage the concave does to that ball until it is all within range is actually quite substantial, even when all I did on the blue side was split them into 3 groups and arrange them in a kind-of-sort-of-concave arc.

Now, in your example, you seem to imply that two marine balls are clashing against one another and that one army stays as a ball and the other user tries to micro an arc. This is kind of faulty logic, however, in that you don't micro an arc. The game UI does it for you. You would have to micro to keep the ball together, and doing that would lower your army's overall DPS. The effect is the same as if you ran into an arc enough that your marines are all within range, then started firing: you take more damage in trying to maintain the ball than you will dish out, and your army will die first.

A clumped army can never cover the same area as an army forming an arc. Especially if it's a large army, the clumped army will have some useless units in the center or ones that are at the opposite side of the arc.

Have a look at the following image. There's a blue army (13 units) forming an arc and a red army (18 units) which has its units clumped. The units are positioned at fire-range to the opponent. If look at it this way, it's actually a battle between 13 vs 7, because 11 units of the red army are out of range (dark red). This battle will most likely end up even or with blue winning... even though the difference in army size was substantial. Just because the blue army was able to use all of it's units in the battle because of the better positioning. 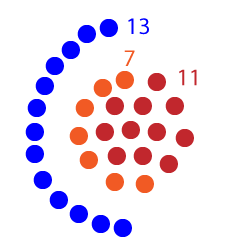 2
Why is my campaign for Starcraft 2 at two different stages with same profile
18
Tips for improving overall gameplay and camera control in Starcraft 2?
10
Forming an arc in SC2 - mechanics
10
How to deal with 2v2 rushes?
5
Do units attack hallucinated units even with a detector?
1
Why so little reaper cheese in top-tier SC2 games?