How does Imperial Luck work?

Most specifically, what is the maximum amount of gold that one can get before unlocking the door with the Helgen Keep Key or killing the first two enemies? The second chest-from-the-door-that-one-enters-to-choose-Hadvar can spawn with gold in it, which seems to be the only thing that Imperial Luck affects that far. (There always seems to be four Septims on the table and no gold in any of the other chests.)

The UESP entry states, "100% chance of 2-10 extra gold in all chests that normally contain gold", but I've found from zero (0) to nine (9) Septims in the chest, shaking the credibility of UESP, or at least that one statement.

Initially, I looked into the Creation Kit for an answer: 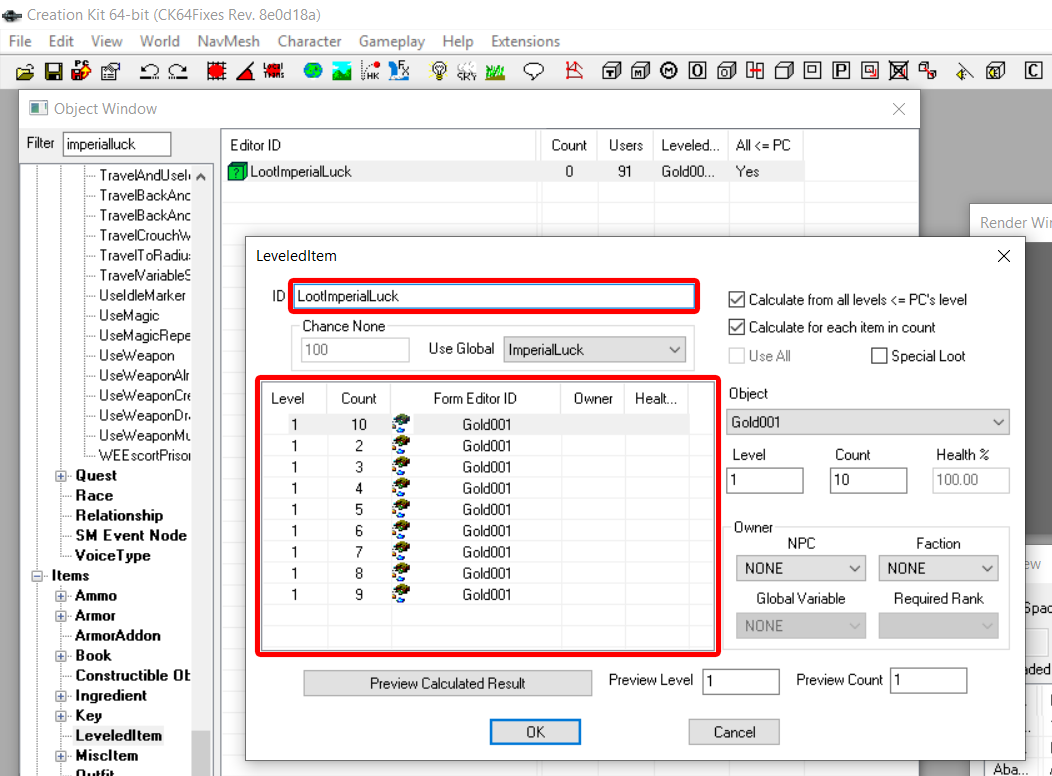 In the screenshot we can see the LeveledItem called LootImperialLuck. This is the ability Imperials have.

This seems to confirm the description given in the UESP entry.

This use of values, which is counterintuitive, is more elaborately explained here:

That blog post offers a very good readup on the four perks most directly involving finding more loot, among which is Imperial Luck (the others are Prowler's Profit, Golden Touch, and Treasure Hunter). Building on the information on the ability already given here, its description of Imperial Luck offers some new insights - disproving the common description in the process:

Imperial luck gives the player a varying number of dice rolls for each type of container. The basic breakdown is as follows:

5 rolls - BOSS chests (except Falmer BOSS chests which give 1)
2 rolls - REGULAR chests 1 roll - All urns (except 'EMPTY' urns)
1 roll - Draugr corpses (the ones that don't come to life)
0 rolls - Dwarven chests (because screw you!) [and Strongboxes]

From what I can tell every roll has an equal chance at landing on each of the 9 spots (meaning if one lands on '9 gold' it isn't eliminated). Over a large enough sample size you can expect each roll to average an extra ~6 gold for you, so BOSS chests will average ~30 gold and regular ones ~12.

I couldn't really find any information on what this power actually did other than most people citing that it adds 2-10 extra gold to a chest, which is not accurate. A pleasant surprise to me, the power is actually a lot more useful and profitable than I thought.

What's most interesting though, and what I found out about the latest (which is confirmed in that same linked post) is that every single player character starts out with Imperial Luck (Imperials have the exclusive racial ability that they are able to see it under their active effects) +. So comparing differences between an Imperial and a non-Imperial player character, to get an idea of the functioning of Imperial Luck in the vanilla game, is fruitless to begin with.
This bug is fixed by the Unofficial Patch (LE / SE).

+ Further down that thread:
"For clarity, in case anyone is wondering, the 'BUG' we're talking about is when you leave the Helgen cave at the start of the game a 'check' is done where certain racial powers/abilities are applied, one of which being the Imperial ability of 'Imperial Luck'. Bethesda being the top notch QA testers they are forgot to include a keyword that would make the game only apply the ImperialLuck if your character is flagged as an Imperial thus every character is given this power."

From what I remember, you only have around a 50% chance of getting more money when you search chests, barrels, and things like that.

Basically, any container you would find that has valuables, you may just be unlucky, and that's why you are only getting small amounts of gold. Or you might have an error or glitch.

13
How does learning enchants from disenchanting work?
8
How exactly does Keymaster work?
12
Under what conditions might gold be flagged as stolen
4
How does ownership work?
1
How does sunburst work?
4
How does trustworthiness with NPCs work?
5
How does detecting Murder/Crime work?
7
How does Reflect Blows work?
63
How does invisibility work in Skyrim?