How does Material Exchange work?

I have the option of trading in some Spirit Bloom (or any of the other materials—Spinmetal, Helium Filaments, Relic Iron) with the Crucible Quartermaster (I believe some other vendor does it too), but it gives me no indication what I'd get in exchange. I imagine it's some amount of rep and perhaps marks, but what is it? And if it's variable, what are its deciding factors? Do all kinds of elements have the same conversion rate?

Note: As of the December 1st update material exchanges now work in the opposite direction, where marks are used to purchase materials.

What is the exchange rate for marks to materials?

You can use 10 legendary marks to purchase 20 of any planetary material from the Vanguard Quartermaster. See below to locate the quartermaster.

Faction rep (per each of the 3 factions: Dead Orbit, Future War Cult, New Monarchy) can be gained by speaking to the respective faction rep in the tower, as seen on the below map. The exchange rates are as follows, gaining rep for the faction rep you exchange with:

EDIT: The below exchanges are no longer valid as of "The Taken King", September 2015.

You can now go to the Vanguard/Crucible Quartermaster and exchange 10 marks for: 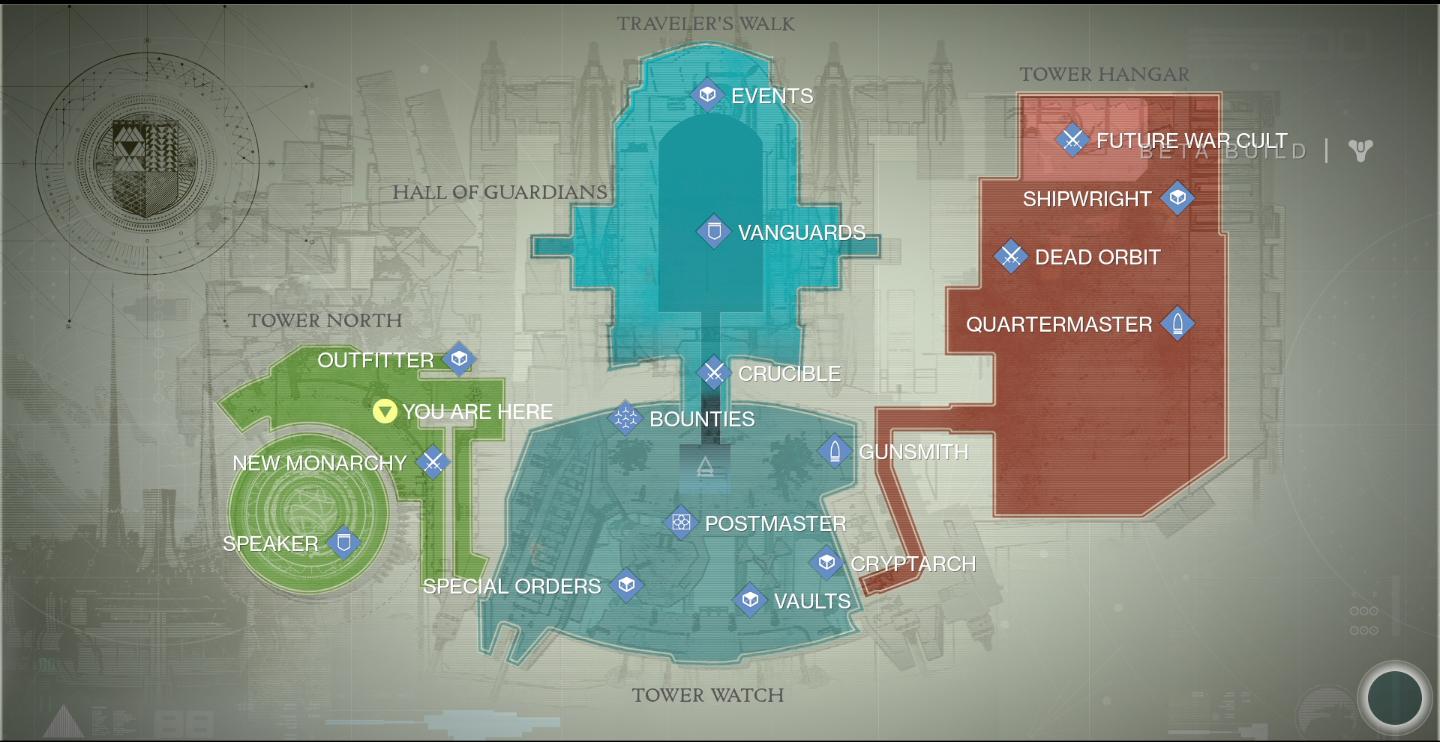 The Crucible Quartermaster is in the middle area of the tower before the class Vanguards (opposite Lord Shaxx). On the map this is in the blue area near the icon that says Crucible.

Each time you exchange 50 of each material to either the Crucible or Vanguard Quartermaster, you get:

These answers are all from before the end-of-year patch. Now, materials exchange only works the other way: you can buy materials, but you can't sell them.

I think if you wear a Faction Mark/Bon/Cloak the marks/rep gain goes to that faction instead of Vangurd/Crucible. Not sure though, I haven't tried it. Though I do know doing Patrol Missions with a Faction Item worn gives the reputation reward to the faction you are wearing.

21
How does arc/solar/void damage work?
3
How do Exotic Bounties work?
6
How does the 'Lets Dance' bounty work?
10
How does Infusing work?
9
Obsolete Material
9
How do collections work?
14
How does Three of Coins work?
4
How does experience work, how does it relate to levels
0
How does Destiny: The Taken King multiplayer work?