How does the Co-op vs AI IP award system work?

I really like the new Co-op vs ai, match type introduced on LoL.

AFAIK, it awards a reasonable good amount of IP for winning once per day, just like your First Win of the Day double IP Boost.

I am asking this, because I have been awarded different amounts of IP with big gaps for winning, for instance:

If anyone has idea on how are these awards given, let me know, because given the examples I have experienced, it tends to be biased towards having more kills, hence I could focus on doing so in order to get more IP.

So I don't know of any specifics related to Coop (as compared to PvP), but I do know that Riot recently changed their formula. If I understand the new formula correctly, there should be no difference between PvP and PvE IP/XP gains on a per game basis (obvious caps still apply).

Previously, the system was based around providing IP in comparison to the 20minute mark (also known as the surrender minimum time). As you played towards that mark you gained more IP/XP and after that mark, these gains rapidly diminished.

To help explain this, let's take the following sample:

I play a PvP against Grace Note and she beats me 25 minutes in. She gets about 115 IP (plus a bonus) for winning and I get about 65 for losing. Now, let's say we play again and again she wins, but this time it takes her 45 minutes to woop my butt. I would get 72 IP for hanging in longer, but she would only get 100IP!

Obviously the goal here was to penalize longer wins and shorter losses. Unfortunately, this encourages farming games, where teams agree to surrender at the 20 minute mark. So Riot changed that formula to a new one. Here's your TL;DR:

For those concerned about endless games, the formula is essentially linear up till the 55 minute mark. Additionally, both Winners and Losers scale up with time (meaning you're no longer penalized for a long win). There is also an extra flat bonus for playing the game which does not scale. Finally, they've also removed the bonus for non-leaver streaks (in preference to the new judgement system.

For more information on the new system you can read here. 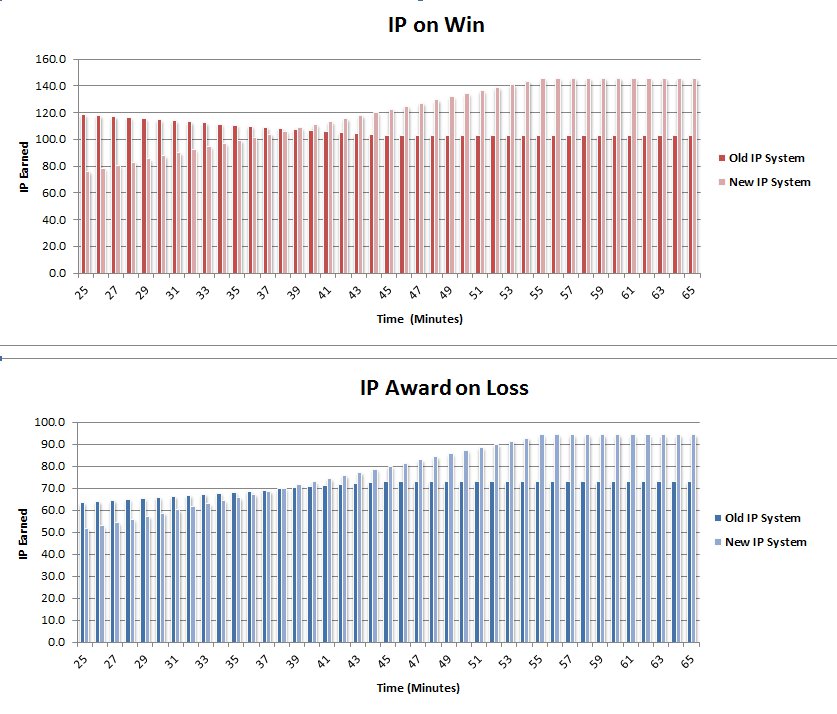 These percentages represent how much of the standard reward is received:

The First-Win-Of-The-Day bonus applies to Co-op Vs. AI games, so your 195 IP reward likely came from your bonus (150 IP) meaning you would receive 45 IP without it. Compared to your second game, you earned the same amount of IP. You won't see big gaps apart from that bonus.

Beyond that, the online faq describes the reward system. Co-op vs. AI games incur a -25% reward penalty like custom games, and have an additional IP gain modifier applied based on summoner level and AI level:

Not the answer you're looking for? Browse other questions tagged pc league-of-legends .

1
Increasing the amount of IP gained from battles
21
Good hero for a beginner?
20
Is IP gained based at all on performance?

5
How does rune combiner work?
4
How does Tenacity work?
6
How does Corki's passive work?
7
How does the report system in League of Legends work?
14
How to pick the best support for your ADC?
2
What is a safe high elo counter to Leona if Thresh and Lulu are banned?
2
How does the LeaverBuster system work?
8
Frequent hitching and stuttering in Metal Gear Solid V: The Phantom Pain: what causes this?
2
How does flash work?