Is it possible to stop the consumption of rare resources?

Does this mean after building enough Tradeposts, resources like furs, spices, and ivory will stop being depleted by default?

No, it is not. Part of the game code includes the following:

This function is used in basically every case where the value of something is a reduction. Thus, the bonus from Pastures, Tradeposts, etc. is run through it. A few seconds in Excel gives the following chart: 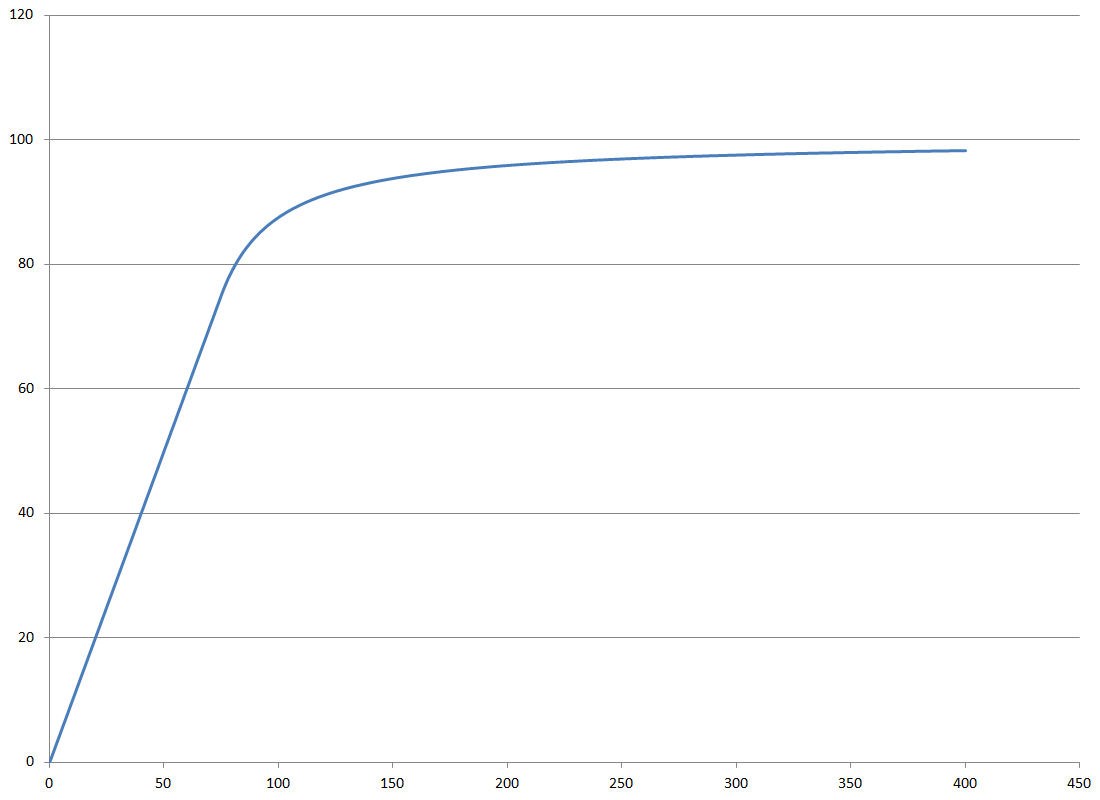 In essence, up until 75% reduction, everything works exactly as you would expect; ten tradeposts give a net reduction of 40%. Past that, there is a sharp curve of diminishing returns; every new Tradepost is still improving the consumption rate, but by less than the one before.

There is hope, however, for two of the resources involved. Once you unlock the Mint building (requires Architecture), it will provide Furs and Ivory in exchange for some Catpower; by that point, you'll likely have enough tradeposts that just a single mint running will give you a net gain to both resources, allowing them to stay above 0 while idle for long stretches.

As a note: This function is generally not used anywhere the bonus from something is an increase. So, e.g., the Workshop boost to crafting effectiveness can stack forever - get a hundred of them somehow, and you're getting +600% crafting power.

I have 29 tradeposts and while my consumption is now very low, it is not zero. With my Mint turned off and 57 kittens, I consume 0.27 furs, 0.19 ivory, and 0.03 spice per second (note, that's NOT per tick). With a single Mint, my fur and ivory production are positive (Mints don't affect Spice). On average, when I find spices once while trading, they last for 45 minutes to an hour, so I can get enough easily to keep my happiness maxed out overnight.

Not the answer you're looking for? Browse other questions tagged kittens-game .

25
How do I increase/acquire titanium?
23
How does happiness work?
14
When does building extra buildings start to give diminishing returns?
14
At what point is it more efficient to build ships than harbors?
9
Is there a reason to reset after hitting diminishing returns for Karma and Paragon?
4
Does the Observatory's chance to auto-observe increase as you build more of them?
2
What do starEventChance and starAutoSuccessChance mean for the Observatory?

5
What does the magnetoBoostRatio do?
4
What is the use of culture?
14
When does building extra buildings start to give diminishing returns?
9
What do the special options in the Census menu do?
1
What is the Emissary of Lizards?
4
What is the "Mint-Effect"?
5
What resources are affected by trade ships?
2
Does the Reactor Vessels upgrade require the reactors to be operational?
2
How does the season-penalty work?