Why do Pros use one Crit-Rune in their Rune page?

Pretty straight forward:why would you want to use one Crit-Rune in your Runepage(giving <1% Crit Chance)?

I have seen this from AD Carry players where it made atleast some sense,but there are also Supports (like Green Tea in this match) using this and I can not really imagine why less than 1% chance to land a critical strike would be better than have a bit more sustained damage.

You do not really benefit from it early game(in contrary,it might even deny you last hits when you get a critical hit while pushing as AD Carry) and as a Support player,you do not get any item with critical hit chance on it and relying on <1% chance does not seem to be worth that rune slot to me.Yet they use these runes and given that players like Green Tea are playing in great tournaments,they want to optimize everything they can so there has to be a point I miss out.

It's basically just for the luck factor. With one crit rune you won't give up too much sustained damage, but you'll still have the ability to crit.

Now this possibility (although it's very unlikely to happen soon) can be really game-changing. A Random Crit can make the difference between getting or missing a kill, and a single kill can change the outcome of a Lane completely.

Also this can confuse the enemy. It's completely unpredictable whether someone will crit or not and because of the low crit chance, most people assume that he won't crit.

So basically: It's simply a "luck" while not giving up too much sustained damage.

This doesn't explain entirely why pros use one crit rune, but it does explain why the one crit rune has more worth than most people think.

As far as I know, Crit chance in LoL doesn't follow the conventional way people think about % chance.

Here's a link to where Xypherous talks about it a bit:

Well, theoretically, I suppose you could "crit-farm" if the enemy champions cooperated enough to stand there so you could charge crits on them.

I hope that your opponent would be unwilling to do that for a very long period of time.

So what does all this mean? If Tristana was attacking Ezreal, and she had 10% crit chance, for every auto attack she doesn't crit, her crit chance increases slightly until she does, and then resets. There's probably a formula somewhere to demonstrate this, but I imagine Riot uses their own constants, so i'll give a rough guide to what I mean.

There's a nice post on the Dota forums showing more accurate math, if you're interested, I believe they use the same kind of system for crits.

As to why Pros take one crit rune, my current guess is as I said in my comment

I imagine the theory is very early game you rarely crit at all when just farming, but the crit chance is still building up. Come lvl ~4 when harass starts more frequent/jungler gank, the crit chance has built up to 3-5%, a lucky crit then could immediately win the lane.

The system never guarantees a critical or a dodge, ever. It simply attempts to nudge the percentages in favor of it.

All figures I've made up are to demonstrate this point, do not take them as exact or even 'near' values, personally I'd imagine they would be much less than I stated, but you can't really tell unless you know Riot's exact method of determining them.

It's worth noting that this system (whether or not Riot also make use of this, I don't know) applies both ways, as Mikey Mouse pointed out, which is also demonstrated on that Dota forum link earlier in this answer.

So if you had 10% critical hit chance, you get lucky and you keep on getting critical hit after critical hit, your chances to get another would actually drop each time, to try and balance this out. An example of this occurrence can be seen in the graph I've nicked from the DOTA source. 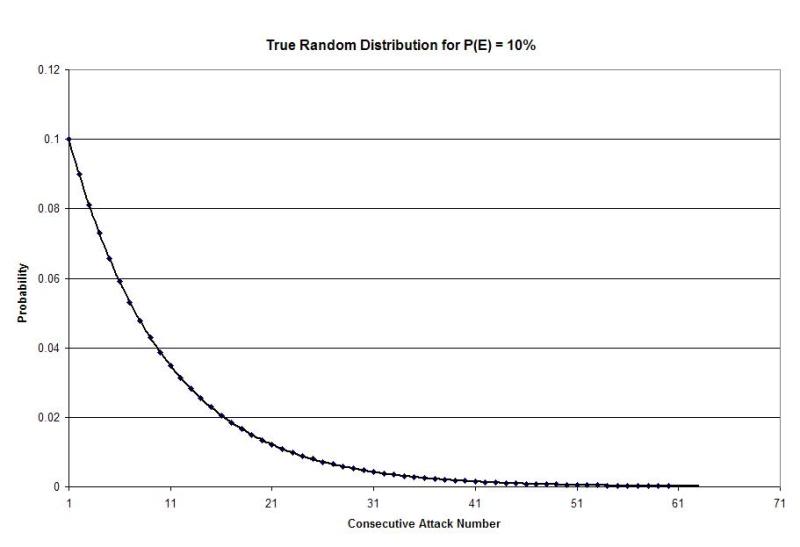 If you compare this to the coin toss example, by using pseudo-random distribution instead it's actually working against you, trying to make you crit less often to compensate for your super lucky streak.

While the other answers do describe why the professionals take a single critical chance mark, none of them state the effectiveness of the strategy.

Currently, Maokai has the highest level 1 base attack damage of 61.3. If he gets a critical hit, he will deal (assuming no other bonuses) 122.6 damage.

Remember, without any critical hit chance, you will never get a critical hit. Also, runes in general aren't particularly game changing, but one critical hit - obtained with luck, can be.

(NOTE: The reason I am focusing on level 1 stats is two-fold.

Also, in the game you linked, Blitzcrank never got a critical hit throughout the duration of the 22.5 minute game - which helps demonstrate how 1% is infrequent)

It is very cost-efficient. Adding another typical rune doesn't bring that much to your stats and build, but this one rune that adds 1% is actually a huge gain compared to what you sacrifice in exchange.

It is based on luck, definitely. As a support, it adds a small chance of dealing huge damage when harassing your opponent, and as an ADC, it might just help to crit in end game, or CS early on.

It is personal preference; they like doing this because after a tremendous number of games, that crit can actually help you win a game. If you would rather rely on another safe rune, do it; it won't affect you that much.

While many of the other answerers touched on the significance of a crit early game, none of them explained why it is so efficient. If not for this efficiency and if it really was under 1% chance to crit someone, NOBODY would do it. As User MLeFevre stated:

As an aside, although I could be wrong as I've been out of the LoL scene for a while so maybe it's changed, or I misunderstood to begin with, but I've heard that Crit chance in LoL isn't just a flat rate. A 0.25% crit chance doesn't mean you have 0.25% chance to crit every time you auto attack. For every subsequent auto attack you perform without critting, the crit chance gets scaled up, until you do Crit, then resets to your base value. So for example with 0.25% crit chance you have 0.25% chance to crit on your first AA, 0.37% on 2nd AA, 0.48% on 3rd etc... until you crit, then back to 0.25%.

Without this little bit, there wouldn't be enough justification in order to do the single crit. Sure that surprise crit would be useful but at under 1% chance it's not worth trading the consistency of another stat for it. The reason it's worthwhile is that each auto will bring up the crit rate so it's going to average MUCH higher than 1%. I'm guessing closer to 3% but it could be even higher. I can't do the math for this right now but maybe someone else could if they desired.

10
Why doesn't Vladimir use Life Steal items?
7
Does the rest of the party get buffed if one of their teammates disconnects?
1
Can two Urgot use their ultimate on each other simultaneously?
1
Why do junglers use Dorans Blade?
8
How to make good rune pages for general use
14
How to pick the best support for your ADC?
5
Why do ADCs always go for damage over armor?
14
Why do Pros skill an ability so late?
12
What are support duties in LoL compared to DotA?