Where are all of the women?

In Snowden Drifts, there is a Hastily Written Letter in a Dredge cave with the following contents: 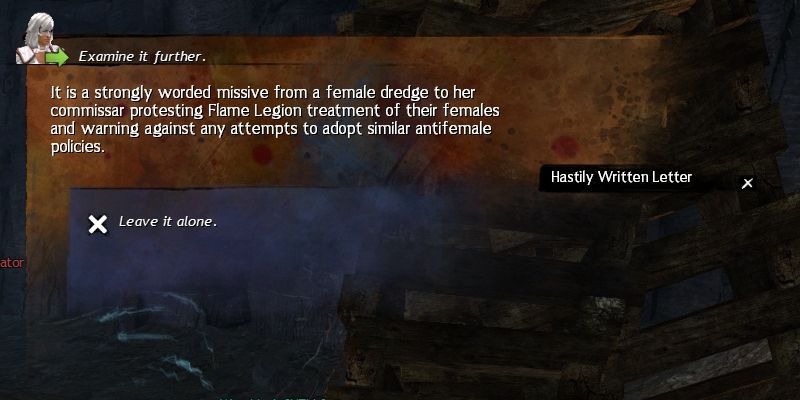 Hastily Written Letter
It is a strongly worded missive from a female dredge to her commissar protesting Flame Legion treatment of their females and warning against any attempts to adopt similar antifemale policies.

The Dredge page on the wiki doesn't seem to have any mention of the Dredge having any females and I don't believe I have ever seen a female Dredge in-game (unless, perhaps, they look just like males as in the case of the Kodan).

Are there any female Dredge in-game? If so, where are they?

There are females, although there is no lore-friendly explanation for why you don't really see any in game (that is, there's nothing like the explanation that the charr females were oppressed by the Flame Legion, nor an explanation that male and female dredge are largely externally physically similar, et cetera).

EDIT: There is a "Battered Book" in Iron Marches (located in a rocky clump south of the Invictus Castrum point-of-interest, in Victium Moors) which reads:

The book is a dredge manifest, heavily annotated by a sarcastic Flame Legion soldier. It includes comments like "Dredge are so ugly. It took us weeks to notice some were female."

This may be an attempt to hand-wave away the lack of female dredge models with lore.

It's been years now since the first set of voiceover was budgeted for and produced for Guild Wars 2 (and since I no longer work at ArenaNet I can't readily go back and poke around at old documents) so take this with a grain of salt, but... My recollection is that they were not budgeted for any VO other than generic combat grunts and such, and thus they wouldn't have "voice roles" (a term used internally to essentially refer to a character voiced by an actor) that specified a gender.

They were basically considered generic monsters that didn't need male/female differentiation in terms of art or audio (just a carry-over from GW1), and the lore that they developed by the release of the game was built up gradually over time, not initially really designed that way.

(This same basic thing happened to the skritt, as I recall: they were intended to be generic, relatively-personality-free monsters. However, unlike the dredge they had one or two one-off scenes that required some involved VO, and the performances we got back for those scenes were so popular at the studio that the skritt got a much-expanded lore and better treatment earlier than the dredge did, and that's why they are more fleshed out by the time you saw them at launch.)

6
What and where are good (fast and easy) sources of Vials of Weak Blood
1
Where to find pets for the ranger?
3
Are all points of interest and vistas in Lion's Arch accessible at the moment?
7
What are all the zone bosses?
2
Will I visit all the explorable zones if I follow the personal storyline to the end?
6
Where are all the Mad Memoirs?
2
Where are all the chickens?
4
What are the different currencies and how are they earned?
7
Where are crafting stations the closest to a Trading Post representative?
2
Where is the greeter npc?