I’ve seen lots of cities with huge tile bonuses, like in the screenshot. What exactly causes these bonuses to increase? Also, is there a way in-game to find what exactly is causing the bonuses on a city tile? 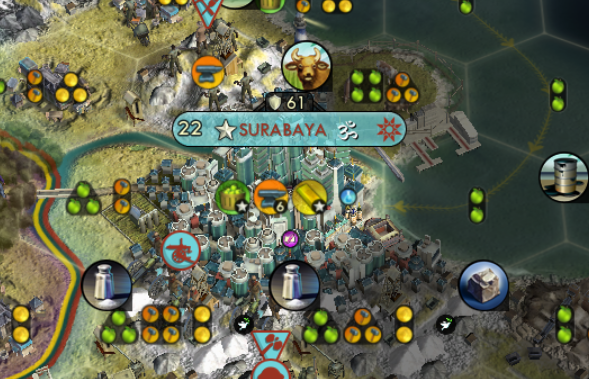 You can increase your city output in two ways:

Not the answer you're looking for? Browse other questions tagged civilization-5-brave-new-world or ask your own question.

9
Formula for City-State tribute values?
2
Civ 5: Recommended Military Units Per City?
20
Is Infinite City Spam a good strategy on Immortal/Deity in Brave New World?
1
Civ 5 BNW: why are city states far tougher than major civ cities on settler?
9
What is a good civ for playing defensively and making money?
6
Merchant of Venice can't buy a City State
10
What factors affect a unit's contribution to city defense?
4
How to capture a city (take over another civilisation) and what is a warmonger penalty?
3
What do I do with stacked units when city is at war?
3
Why is movement limited within enemies' borders outside the Great Wall?