What is ping, and why is it important?

I've seen the term used in many online games but I'm not sure what it means.

What does 'ping' mean? Is it better to have high or low ping?

Ping is the amount of milliseconds it takes a packet of information to reach the server from you and back. Basically it's a measurement of connection speed, and it influences lag quite a lot.

[Ping] tells how long it takes a "packet" of data to travel from your computer to a server on the Internet and back. Whenever you experience delayed responses in Internet applications - this would be due to a higher than desired ping. Similar to packet loss, lower is better when it comes to ping. A result below 100 ms should be expected from any decent broadband connection.

Ping is the measure of latency (lag) from your computer to the server and back to your computer. A ping is sent to a server (which contains a packet of information 32 bits long, those are a combination of 32 0's and 1's) and then the server sends that back. 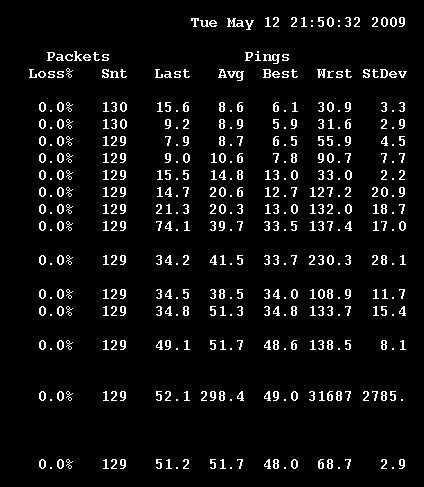 The time taken for the information to get from your computer, to the server and back to your computer is the amount of latency that you have. Lower ping is better than higher ping because it means that you will send information and receive the server's response back quicker. If you have a high ping (>500ms) it means that it is taking over half a second to get to the server and back. This means you will notice that there are jitters and jumps and a term called "rubber banding" during online gameplay.

A high ping (or latency) can therefore influence the outcome of an online game.

It's worth noting that there are many things that can influence your ping and that is:

Some other things to consider when looking at ping:

Ping is a measure of how is your connection to the server (in a multiplayer online game).

Obviously a low value is better and you should prefer that server, a high ping may even get you kicked (it wouldn't be possible to play anyway as you'd see things that already happened for everybody else, making it hard to, for example, hit an enemy that's no longer where you see him).

In multiplayer online video games, ping refers to the network latency between a player's computer (client), and either the game server or another client (i.e. peer). This could be reported quantitatively as an average time in milliseconds, or qualitatively as low ping or high ping. The latter usage is common among players of first-person shooter and real-time strategy games. Having a low ping is always desirable because lower latency provides smoother gameplay by allowing faster updates of game data.

Ping is often conflated with lag. One may "lag out" due to unacceptably high ping. Servers will often disconnect a client if the ping is too high and it poses a detriment to others' gameplay. Similarly, client software will often mandate disconnection if the ping is too high. A high ping does not cause lag; rather, a high ping value is the result of lag. Rather than using the traditional ICMP echo request and reply packets to determine ping times, game programmers often instead build their own latency detection into existing game packets (usually based on the UDP protocol).

Some factors that might affect ping include: network protocol engineering, Internet connection speed, the quality of a user's Internet service provider and the configuration of firewalls. Ping is also affected by geographical location. For instance, if someone is in India, playing on a server located in the United States, the distance between the two is greater than it would be for players located within the US, and therefore it takes longer for data to be transmitted. However, the amount of packet-switching and network hardware in between the two computers is often more significant. For instance, wireless network interface cards must modulate digital signals into radio signals, which is often more costly than the time it takes an electrical signal to traverse a typical span of cable.

A lower ping is generally more desirable, but note that a higher ping is only really an issue for time-critical instructions, such as for fast-twitch FPS-type games. The maximum practical ping in this case is around 300ms (or about a third of a second). Any higher, and you will appear to "stutter" to the other players (and you will see them doing the same thing). Many FPS game servers are set to disconnect high-ping players automatically.

Short answer is: Time that i takes to send event to server and get response, the lower the better.

A bit longer answer is: The other term is also latency - connection speed has two parts badnwidth (amount of data you can transfer within given period of time) and latency (time for given amount of data to travel). Ping is latency of small amount of data. Unit of latency is time - specificly milliseconds.

In fact latency is corret term for what ping is now used. Ping is small program on all platforms (Win/linux/mac) that lets you messure latency over TCP/IP network. It uses specificly ICMP protocol, and is originaly used to test connection. It sends small amount of data and waits for response. result of pingis the time that was taken to send and receive data.

Your game doesn't use ping [program], it messures latency in it's way. (for example it sends your movement and waits for response) - you need to have latency less than 120ms to be able to play FPS. The lower the better. In game the lower latency/ping the faster the response is.

In comparsion if you are downloading a large chunk of data, you don't care for the latency, you only care for bandwidth.

The term ping comes from echolocation - if you have ever seen a movie wth submarines yoou should know how echolocation works - you make low sound like 'ping' and listen for echo of it.

Ping calculates the round-trip time of the data packet's route from its source to the destination and back, and determines whether any packets were lost during the trip. Lower ping time is better.

If you have a high ping time, your interenet speed is low. So you can't play any game on the internet. You can check whether your ping is high or not using Who is XY.com. I hope it will be helpful for you.

Not the answer you're looking for? Browse other questions tagged terminology networking .

1
'Ping' in multiplayer games
-1
Why does ping get higher if the server is in a different region?
23
What does Packets / Packet Loss mean
3
Does router speed affect ping?
0
Is my connection too slow?
-1
How far away can you be to play MCPE with someone?

22
What does the term "carebear" mean in Eve Online?
33
What does it mean when a game is a 4X game?
39
What does Metroidvania mean?
92
What is kiting?
16
What does MOBA really mean and what characterizes games that belong to that genre?
12
What does "PvP" mean in multiplayer servers?
14
What does "zoning" mean for fighting games?
15
What is corpse hopping?
12
What is "rubber banding"?