Is it possible to train on bosses using weapons other than the dagger?

Boss fight practice uses the dagger. Considered that it's perhaps the single worst weapon, that makes some sense. However, this probably result in the developing of strategies that work when you have the dagger but are disastrous when you don't.

For example, the best thing to do for King Conga 3 seems to be rushing to the center. That probably won't work if I have a whip, however. I don't know; I probably would have to find myself in such a situation in a real game to know just how terribly wrong that plan can go.

Is there a way to change equipment in boss (and miniboss, and enemy) training?

New Answer: YES, and it's not difficult to do now.

Note: Look in the edit history to see the old answers.

Since Necrodancer's release, there is now an NPC available called the "Weapommaster" that will swap out your weapons for training. You need to buy him for 400 gold from Zone 2.

The game now features a built-in way to do so. You can unlock the Swordmaster by buying a golden key in 2-2 for 400 gold (or at least, that's how I did it.) 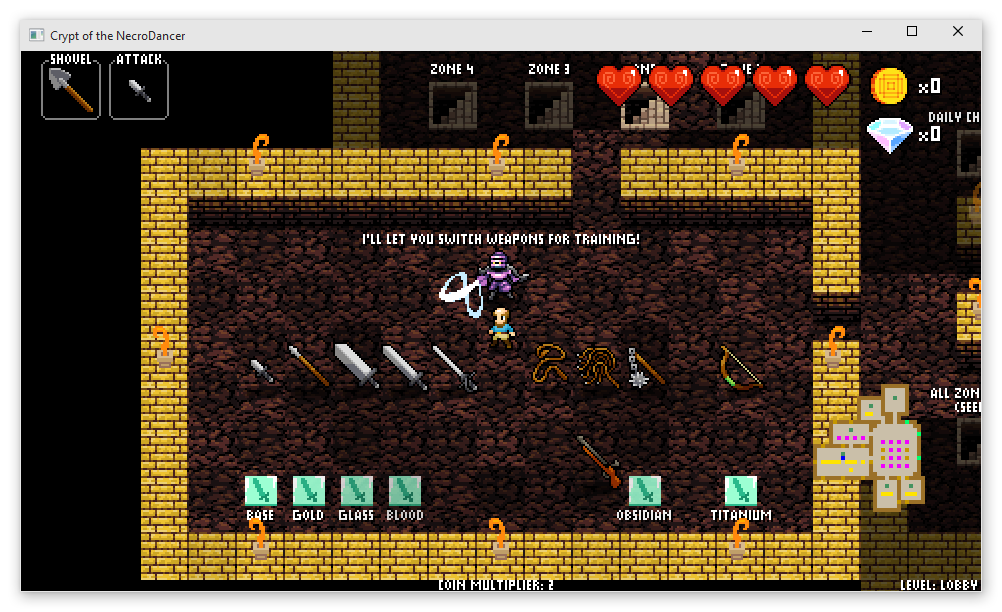 From here you can bring any weapon to the training areas. Jump on one of the buttons to change the material of your current weapon.

Not the answer you're looking for? Browse other questions tagged crypt-of-the-necrodancer or ask your own question.

14
How is it possible to get killed by the Green Slime?
0
Do gold weapons and the Ring of Gold stack?