Steam Purchases: Can you store pre-purchased items in your inventory?

On the Steam store, there are some games/software that can be pre-purchased/ordered, purchased as a timed license/one-time license (which most games/programs use; basically binds to one Steam account, only that account can use purchased license).

Can pre-ordered products bought as a gift item that goes into your Steam inventory for later binding or trade? It said:

One or more of the products in the transaction have not been released and are not currently avaliable.
These products will automatically be made available to you or your gift recipient via Steam upon their release. Release dates for products are subject to change.

Also, by 'later', I meant sometime before it is released.
According to the game's forum, the developer said:

We intended to make it an Early Access, but unfortunately this status is not available for Software on Steam, only for Games. We discussed this with the Steam Developers Support and the only option to have an Early Access was to make a Pre-Order with Beta access. 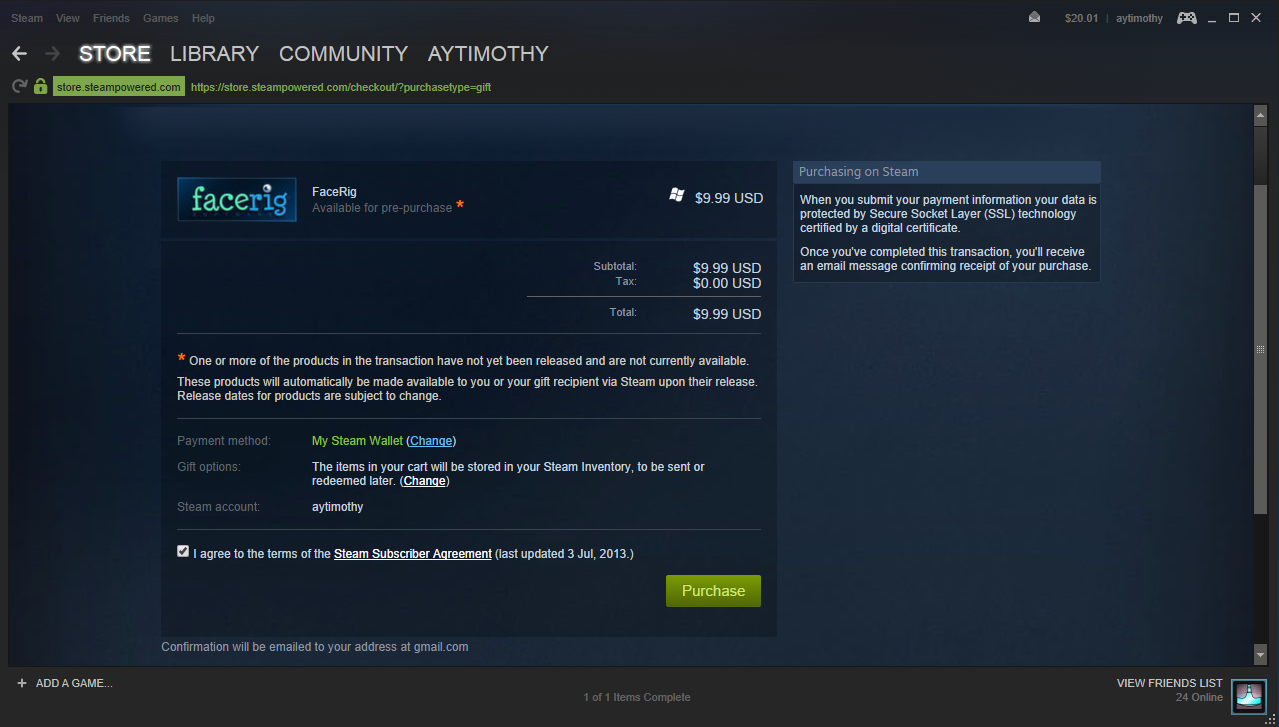 Like all things you buy on the Steam Store, everything (except for timed subscription licenses, such as EVE Online subscriptions*) can be stored into the inventory.

For pre-orders, the "pre-order" does not register until the gift of said pre-ordered item is binded to an account.
Basically, you can pre-order something for someone else as a gift. It is just that usual restrictions apply (such as "You can't play this until X date; when it's released").

* Even EVE starter packs are not giftable.

6
Humble pack on steam and future releases
48
Can I safely uninstall games purchased from Steam?
3
Can you activate Don't Starve purchased from GOG on Steam?
1
Steam Locked Me Out- Please help!
34
Is there a way I can check dates (going over 2 years back) on Steam Store purchases?
16
How to remove all items from Steam store cart?
2
What exactly am I risking if I buy Steam keys from unauthorized sellers online?
7
Have Steam accounts ever been silently created as part of some other registration process?
2
How can Steam Inventory items be shown from a private profile?