Is the bonus wheel on candy crush random?

In candy crush you have this daily booster wheel which spins around and you click stop to get your prize: 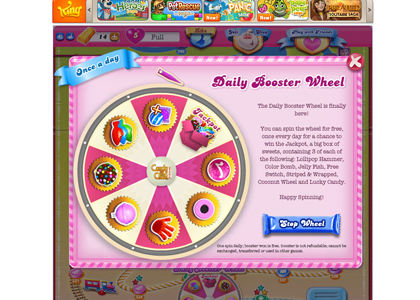 After you click Stop Wheel the spinning gradually slows down and you get some prize.

Is the outcome influenced at all by when you click stop, or is it just a random number generator? I.e. is there any possible strategy to "aim" for a particular bonus.

edit: Since many answers misunderstood this, the question was whether the outcome was influenced at all by when you click the button. The question was not whether the wheel's outcomes are uniformly distributed (they clearly are not).

For example, I have used this wheels over 100 times, if it is truly random I would hit the jackpot at least once. But that never happens, so when it comes to the jackpot, it is not random, it's fixed so the chance of getting the jackpot is very very small. I have seen the wheel about to stop on the jackpot but it will either stop before it or push to the next one.

In my experience, getting the lollipop was the easiest one.

You cannot influence the outcome of the wheel, so just click stop and then like the game, it all comes down to luck

It is completely random. There is nothing you can do to influence it.

While it may be "random", it is impossible that the odds of getting a jackpot is the same as the other power ups.

While I'm sure its possible to hit the jackpot once every blue moon, the wheel is most definitely NOT representative of the actual odds. The wheel here is random in the same way that a weighted dice is random; technically it's possible to roll any of the 6 numbers, and it gives the appearance of equal odds, but in reality some numbers are much less likely to be rolled.

It seems to be random and there is no way you can influence it.

However, you won't get 5 jackpots in 50 tries even though it seems to be one out of ten (personal experience).

Given it's a game, and a piece of software, and we aren't there yet, it's not random, as there is no such thing as true randomness in game (software) development. The randomness is based on a time stamp, and if enough info is present a hacker can guess what the random number would be, but i side-quested quite a bit.

In this and many many other games each item on the wheel has a "player wins this" value, that represents how often the wheel stops there, the higher the value, the more stops a player gets. Since I've never played the wheel myself and don't know what items are good and not I'll try to explain it with other examples.

Much in the same way, you would only get crappy candy-crush awards on most of the spins, and really only once you MIGHT get jackpot, or whatever the best price is.

Shortly this is done by the developers to encourage players to comeback every day and spin the wheel and potentially play the game, yet (the developer) not lose money, by giving away great things (like 100s of dollars worth of in-game items)

Edit: if the developer has some decency the "player wins this" number wouldn't be zero, and the spinner would still be based on the semi-randomness programming offers, so even though the number is quite small, there is still chance to hit it.

Source: game development theory during my studies of Computer Science

No, it is not truly random, as other answers showed (with a truly random wheel, each sector would appear equally 1/8 times).

However, it is possible to win the Jackpot: 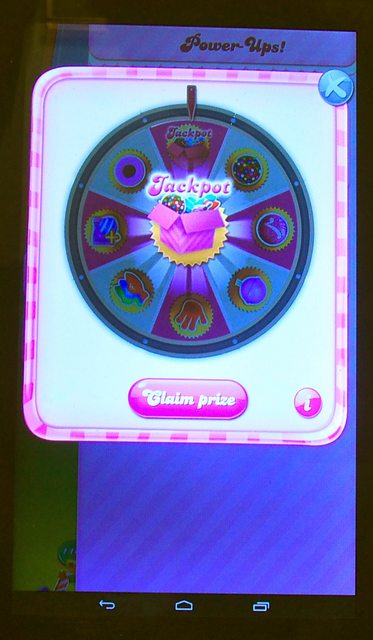 Not the answer you're looking for? Browse other questions tagged candy-crush-saga or ask your own question.