In Kerbal Space Program, not all time units are equivalent to their real-world counterparts. Seconds, minutes, and hours seem to be roughly the same but there seems to be some breakdown after that. The hours counter appears to reset, and the days counter is incremented, after only 6 hours and I haven't quite figured out how long a year is yet.

I've reviewed the chart in the Time entry on KSP Wiki but its numbers and their meaning are are not really clear to me. (Screenshot below for reference and posterity) 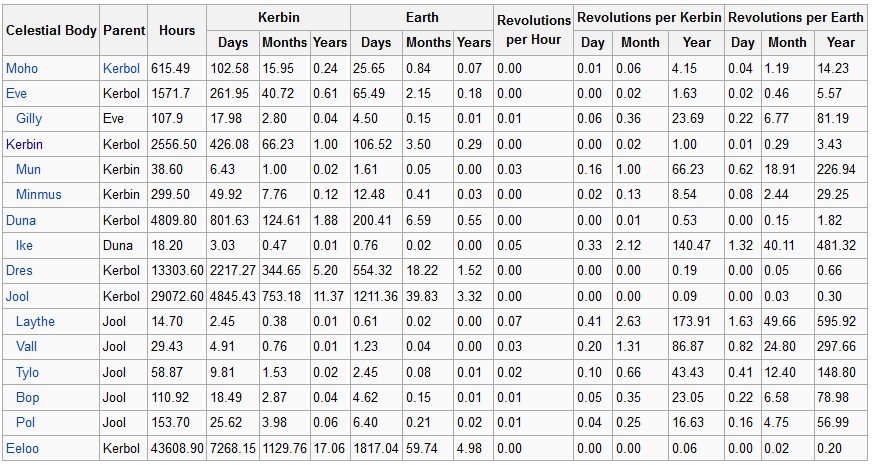 I'm having a hard time understanding what the base unit of measure or reference in that chart is meant to be, which would then allow me to realize how each of the values in the chart are meant to relate to one another. There is also one time unit (Month) that I'm not sure I've seen used in-game, so I'm wondering if that's even really a relevant metric or just a colloquialism created by players to bring the Kerbin time system's structure more into alignment with real world systems.

So, my questions are these:

As to the chart, it's fairly self-explanatory, as up until you pass "hours", Kerbin units and Earth units are equivalent. The first section gives absolute orbital time, and the second section gives orbital time relative to Kerbin's values. For example, on Moho, the "Revolutions per Kerbin Year" is 4.15. This means that in the time it takes for Kerbin to complete one orbit of Kerbol, Moho will have completed 4.15 orbits of Kerbol.

I have test this bash script up to 100 years on the ingame mission timer and it seems to work. No leap days encountered, and it seems based on "UT" seconds in the savegame file that a year is precisely 426*6*60*60 seconds.

13
How can I calculate the right number/types of parachutes for my craft?
4
KSP parachutes not deploying
6
What are the units of measure used in Kerbal Space Program?
4
Recover launch stages in KSP
1
Does KSP model friction?
7
Does KSP auto-update?
9
Rover power in KSP
2
KSP: why does TrackIR crash the first time, run the second time?
2
Can't make sense of launch window planner results
5
KSP throttle off after set time