How do I upgrade to the gatling gun?

I am playing on Civ V from Steam on my Ubuntu (Linux) OS.

Do I need a mod/extension for this to work?

Yes you do. You need the Gods & Kings expansion pack.

It states directly on the wiki page of the Gatling Gun that it was:

(found under the image in the wiki link you posted)

Some information about the Gods & Kings expansion pack:

Sid Meier's Civilization® V: Gods & Kings is the first expansion pack released for Civilization V. It was released June 19, 2012 in North America and June 22, 2012 worldwide. As the name shows, the expansion focuses on a brand new feature - Religion, which adds a whole new level of development for a civilization.

The Gatling Gun was added by the Gods & Kings expansion. This is actually stated underneath the image on the right hand side of the page you linked to: 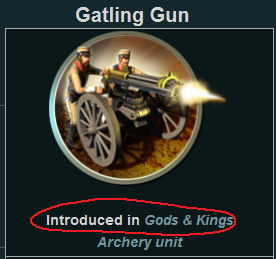