What is a good defense against the Octozombie?

The Octozombie is annoying and often prevents me from passing levels.

What are some good defenses or strategies against the Octozombie? 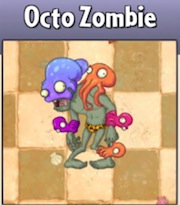 Tangle Kelp is the best answer.

Later you will get the Banana Launcher which is effective if you have it planted already.

I always use the Cabbage-pult wth plant food as it deals heavy damage to the octopi the zombie throws at you, as well as the zombie itself.( a lvl 1 cabbage-pult's plant food can kill a regular zombie in 1 hit!)Potato mine/Primal potato mine can kill it the moment it steps on land, but they don't work in the sea.

VolleyJosh's answer is fine for Big Wave Beach, but with later versions of the game, Octozombie can be encountered in a lot of other terrains and the dude can cause be a real pain as a result. A few additional options to consider:

The goal with these plants is to just delay so that you have time to do something without Octozombie covering everything.

Instakills are a valid strat for the sake of just quickly eliminating the Octozombie, but be cognizant that if it's an instant that waits you commit to triggering it right away by planting on top of your target. It's super annoying to place a squash 3 tiles ahead and it just gets covered in octopus.

Additionally, there are modifications you can make to your planting strategies.

This might seem a bit odd, but it is really hard to eliminate an octopus that's placed on a plant in the backmost column unless you've brought something that's effective at backshots or launch a mower. The former can be feasible in standard play, but high level play often has limits on seed slots, which may make that amount plant specialization less viable.

When I implement this strategy, I will eventually plant the back column, but it will be heavily delayed until the back half of the level when things are more robustly established ahead in columns 2 through 5.

Often sunflowers (of most any type) can serve as an effective buffer plant to place in columns 4 through 6 since with a single burst of sun they've paid for themselves and anything extra is bonus. Additionally, you can use cheap or free plants to buffer and waste octopi on like puffshrooms.

Primarily these are bonk choy and pokra as they can deal a lot of damage to close range targets very quickly and thus remove octopi faster than they can be thrown. They can become overwhelmed if the level's zombies become exceedingly strong by comparison, but at that point you're probably pushing too far anyways and need to pull back to easier levels.

This is not a great strategy in my opinion, just because it can be hard to pull off effectively if there's several Octozombie threats at once. But to summarize, if a octopus is getting hurled, you've probably got half a second to a second to dig up the plant it's going towards. If you do so successfully, you can force a miss and collect whatever sun that gives you.

6
What causes a treasure Yeti to run away?
2
What is the quickest way to kill Camel Zombies?
4
How do I bait the parrot?
4
Can I avoid spending sun and not spend (in game) money?
2
When do keys drop in plants vs zombies 2?
5
What is the difference between blue and striped blue-and-white defeated levels?
0
pvz2 bugs in worlds?
2
How do you stop the Zombot Aerostatic Gondola from activating the fire traps?
3
Cabbage Pult Missing from Almanac and My Plants in PVZ2