In the lore of Warcraft do Shamans have a special relationship with Murlocs?

In the Hearthstone expansion Goblins vs. Gnomes two of the new shaman cards, Neptulon and Siltfin Spiritwalker, seem to indicate a relationship between Murlocs and either Thrall or the Shaman class. This is of interest as none of the other heroes have class specific Murloc cards. In fact until the Goblins vs. Gnomes expansion the only viable hero to use when creating a Murloc deck was Warlock.

In the lore of Warcraft do Shaman's have a special relationship with Murlocs? Is Blizzard referencing Warcraft lore by adding class specific Murloc cards to Shaman or is this more a Hearthstone game mechanic? 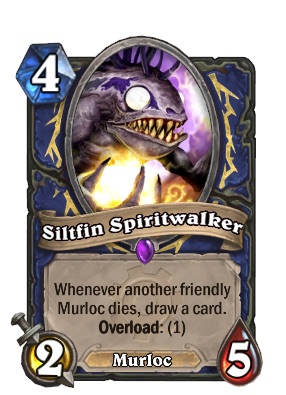 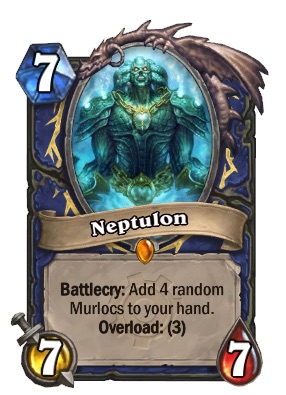 For Lore Purposes, i think these two cards are best looked at seperately.

There is no lore connection why Thrall would be using Murlocs in battle. Infact, when he founded Durotar and Ogrimmar, Murlocs on the coast were such a strong force that he teamed up with the Darkspear Trolls to combat them.

But still because this Card is a Shaman of another race it makes sense and is inline with other class cards, like Steamwheedle Sniper or Sorcerers Apprentice.

Neptulon the Tidehunter is one of the four Elemental Lords and he rules over all Water.

Why is he a Shaman card?

Shamans command the elements and elementals for their cause, and he is the leader of all water elementals. Every being who uses water magic worships Neptulon.

Why does he give you Murlocs?

It is often speculated that Murlocs or their ancestors that lived in the deep sea were transfered to their apperance by the Old Gods like the Naga. When Neptulon still served the Old Gods, he could have been the force to do so. It is even rumored that Murlocs were send to the coast by Neptulon. Also, a lot of Murlocs worship "the Deep One" which is probably refering to Neptulon.

So the Answer is:

There is no special Connection between Murlocs and Shamans, but these cards still make sense to be Shaman Class Cards.

There is no real connection of Murlocs and Shaman. Most of the time your killing them because they are a pest. However, I want you to look at the Lore behind Neptulon as he is neither a Shammy nor Murloc. Neptulon is one of the Four Generals to the Old Gods that didn't fight the Pantheons(Titans) when they came to Azeroth. Currently I can Find no lore on how Murlocs came to be. Instead WoWWiki simply states:

Though murlocs are relatively new to the Eastern Kingdoms, it is increasingly believed that they are actually a very ancient race of Azeroth.

Although some, though very little Murloc cultures have shamans, thats the closest connection you can get.

I'd also remind you that this is very loosely based on wowlore.

Not the answer you're looking for? Browse other questions tagged world-of-warcraft hearthstone .