How does skull amount affect the Golem's strength and HP?

I've realized having more skulls than the enemy team makes your golem stronger, but is a 55 skull golem weaker than a 100 skulls golem?

I've analysed a replay and came to these preliminary conclusions.

In addition, there seem to be "rounds": each subsequent "round" of golems will be stronger in absolute numbers (HP and damage wise).

Finally, the time mines have been opened also has some influence on golem health and damage, although that has recently been capped from the moment 4 minutes have passed or at least 60 skulls having been collected. See these patch notes for details.

The first three golemns of my match were like this:

If we convert this the percentage of skulls and a percentage of total health bar ticks amongst the two golems, and plot that, we get this (with a linear trend line): 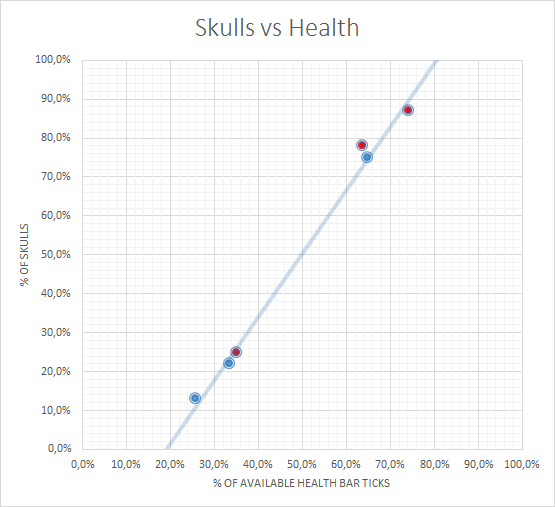 I have not been thorough enough for this to be acceptable on our statistics sister site, but based on experience and gut feeling I'd say this trend line is close to the real thing.

A similar thing can be done with offense. If you observe the health of the same building (e.g. a wall) drop for golems of different strength, a graph could also be plotted.

This is significantly more labor-intensive, so I've left that as an exercise for the reader. However, based on casual observations, I'd estimate a similar graph would pop up as the one for defense. To give an indication, here's a comparison of one single hit of golem 3 mentioned above on a wall:

If anyone wants to collect more / more precise data, I welcome them to add it to this answer. But perhaps we should wait until we can (/ know how to) use the combat log :-).

7
Is there a combat log in Heroes of the Storm?

22
How to effectively level in Heroes of the storm?
0
Can any account play Heroes once it's been downloaded?
4
How much is killing heroes worth?
13
How to make the most of having an Abathur on your team?
3
What determines how many catapults spawn in a lane?
12
Does vulnerable stack and if so how?
3
What causes Nova's Triple Tap to go on a short cooldown?
3
Is there a way to make old replays viewable?
1
How do I determine my highest obtained rank for the current season in Heroes of the Storm?