(Playing only the combat demo) I haven't figured out a way to reverse the way the direction I'm facing so quickly. I have tried with and without Flight Assist. I've only been able to turn, on a mostly horizontal plane, very slowly.

I'd like to know if such a maneuver is actually possible in game; and if so; How?

There is no "do a 180" button in Elite Dangerous. This comes down to two things:

The speed you're moving matters because optimal maneuverability is attained only when moving at specific speeds. See the below picture: 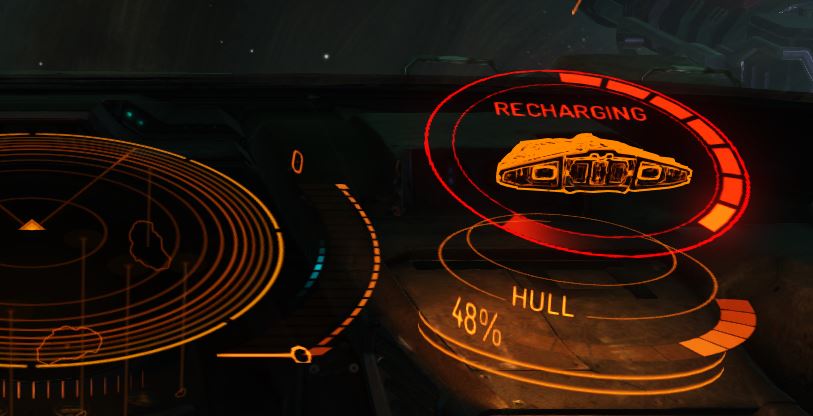 In addition to maneuverability, your ship has a variety of thrusters in addition to your standard yaw and pitch which when used in together can further decrease your turning circle - this is where practice comes in but this is helped greatly by having a good controller and decent key mappings as it means performing multiple actions at once while tracking your target.

In Elite: Dangerous there is the notion of "Flight Assist". This is something you can turn on and off via a bound control (I forget what the default is).

When Flight Assist is off, you are at the mercy of Newtonian physics. Your ship will mostly obey conservation of linear and angular momentum. In layman's terms, that means any thrust you apply to your ship (either in the form of straight line movement or rotation) will continue unabated until you apply a counter thrust.

This means that in game, you could perform this maneuver thusly:

It's a very tricky maneuver and takes some getting used to. You can see an in-game example of using Flight Assist Off with Silent Running to avoid getting searched by the cops.

Flight Assist On means that your ship behaves much like an Aircraft would in atmospheric flight, i.e. like most of the space and flight sim games that have been released so far.

I would like to expand on the answers already given by other people.

While you cannot perform the EXACT same move as presented in the trailer, it is possible to do something very similar.

Note, that even with flight assist turned off your ships turn rate can still vary. I found I can make VERY quick turns by:

The reason I suggest boosting is because you will gain not only an increase of speed when boosting, but also an increase of maneuverability! Said increase can be already useful with flight assist enabled... and with FA disabled you can make some really fast turns!

That video is not actual gameplay. I don't believe any of the ships are capable of turning that fast. If they are, it's via a lot of upgrades that your starting ship doesn't have.

The closest I've been able to get is roughly like this:

Alternately, instead of reducing your forward throttle into the blue range, you can hit the up or down thrusters to keep your overall throttle in the blue range. If you simply leave your throttle off, you'll have a much slower pitch speed.

If you kill your throttle instead of dropping it, you'll stay traveling straight (more like the video), but your turn speed will be very slow.

Instead of re-enabling flight assist, you can reverse your pitch in order to level back. With flight assist off, the flight stick directly controls maneuvering thrusters and you have to provide the correct amount of counteracting thrust to stop. I find that disabling flight assist briefly is very helpful, but leaving it off makes it too hard to line up sights on things and tends to leave me tumbling in very hard to control ways.

If you try to yaw (turn sideways horizontally) instead of pitch (pull up/back or dive forward/down) you'll find that the turn speed is significantly slower. You could try doing both a pitch and a yaw maneuver at once, but I think you'd need to also have a bit of roll in there to get that to work out right.

I wouldn't try this up against the side of a space station (or asteroid, etc) or in close combat range. Where I have found this useful is to boost out of weapons range, flip backwards and then fly backwards at a speed the enemy can catch up while you do a bit of random pitch, roll and yaw maneuvers. Especially effective if you have gimbaled weapons, since it allows you to sustain fire at the incoming enemy while dodging their incoming fire. With fixed weapons you'll have to alternate between dodging and firing.

I'm fairly sure that an exact recreation of the move in the video is impossible, the turn rate is too fast.

As mentioned above, disabling Flight Assist allows you to preserve your direction whilst turning, however the developers have added an artificial slow down to your momentum whilst doing this.

Again, as mentioned, keeping your speed in the blue "sweet-spot" on the velocity indicator will improve your turn speed and upgrading your thrusters will also help, but the turn speed showed in the video will still not be achieved.

The only way it might be possible is to ignore the sweet-spot, be at full speed and then use the Boost button as you start the turn. This not only boosts your top speed, but it also massively improves your turn speeds (to the point of causing black/white out on some ships).

As far as i know i've only see AI do instant 180 turns without thrusters or any sort of other methods, they simply flip 180 under 1 second, AKA mpossible for players to replicate. Would be wonderful if that was possible though.

What I do to turn fast and ruin days is throttle max, engine blips max, boost, FA off, mixture of yaw, roll, pitch, forward thrusters, upward thrusters, and left or right thrusters, FA on. its really wonky with the tflight hotas since your joystick hand if twisted and flung to one direction and the throttle is maxed and i have thrusters as buttons on the throttle handle so im pressing 3 there. But you can get a pretty tight turn.

I just watched the trailer for the first time and I think I could do that with the right flight stick. You have to have speed and then at the same time you cut the throttle to the minimum of the blue, maybe less, turn off flight assist, pull back while firing your downward translation thruster. Turn on flight assist or counteract that with the stick, fire, and the repeat to get back to forward facing flight. I wish my stick had enough functional buttons to pull it off.

Not the answer you're looking for? Browse other questions tagged elite-dangerous .