Why did all my systems shut down when I deployed hardpoints?

After earning some credits trading, I traveled to the station where I had a basic Eagle, swapped to the Eagle, spent some credits on upgrades by swapping out the two default pulse lasers for 3 of the best weapons I could buy, adding in a frame shift drive interdictor, a warrant scanner and maybe something else, so that I was well-equipped for some bounty hunting. I set the fire groups up in a reasonable fashion.

Eager to try out my new fighter, I traveled a bit slowly to another station until somebody else FSD interdicted me, I got ready to fight by targetting them, throttling up to 50%, and deploying hardpoints. When I deployed hardpoints, though, I got a dire warning about power usage and everything shut down; no weapons, no thrusters, no nothing! After a few moments of panic, I was able to retract my hardpoints and run away.

Why did deploying hardpoints use up all of my energy? How do I prevent that from happening again?

The first thing you can do is pay attention to your power when you're equipping your ship.

This particular screenshot shows me evaluating a weapons upgrade that would raise my hardpoints deployed power utilization just over my total available power. Note that the red color is just what's used when that stat goes up; you have to actually read the numbers to know that it's gone over the available power. 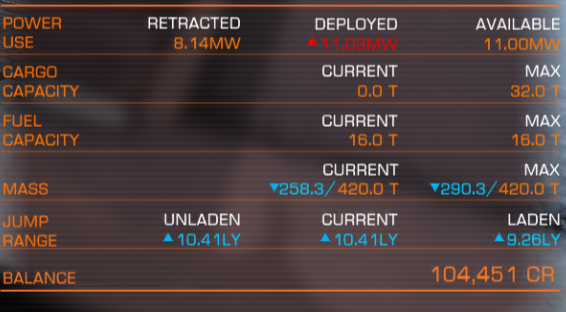 But that laser is awesome and I still want to use it! Can I still do that?

Yes. You need to pick some things to shut down when you deploy hardpoints. You'll still get a dire warning, but only things you decided were non-essential will get shut down.

In fact, even if you don't want to equip more stuff than you can fully power, it's a good idea to set your module priorities, since it's possible to take damage in combat that reduces your power capacity.

Use the 4 to switch to the Systems panel of your cockpit, use Q/E to switch to Modules, W/S to select a particular module, and A/D to change the priorities. I suggest putting your thrusters in the highest priority (1), and putting the Cargo Hatch, Frame Shift Drive, Discovery Scanner and anything else you only want to use while docked or in frame shift into the lowest priority.

In this example, you can see that I have the Cargo Hatch at the lowest priority (4), thrusters and a low-power-draw weapon at the highest priority (1), other things essential during combat (shields, power distribution, another weapon) at the second priority (2), and things that would be really nice to have, but I can do without for a while (kill warrant scanner and life support) at priority 3.

Note that the list is sorted by how much power each module draws (the percentage), and that there's a graph on the bottom that gives you a good idea how much power utilization is assigned to each priority level. 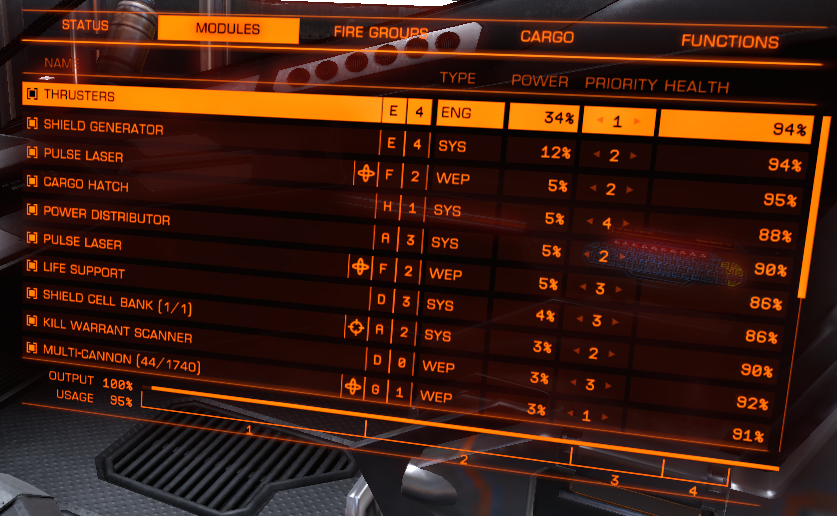 After a lot more practice with running too much stuff on too little power plant, here's how I'm setting my module priorities:

As long as my power plant can power the first 3 priorities, I'm fine. If it can't power down to priority 4, it just means I have to retract my hardpoints and wait an extra second before I can frameshift away. If I don't have power for shield cells and put them into priority 4, that's not too bad, since when I need shield cells I'm usually fleeing not shooting. If my power plant is damaged, the 1,2,3 ordering still helps. If I can't power priority 3 with hardpoints deployed, I can always go into the modules panel and shut down my most power hungry weapons while doing a warrant scan, and then turn the weapon back on once I've finished scanning.