How does this spawner farm work?

I've seen a few different mob spawner farm designs around. Lots of people seem to like this one: 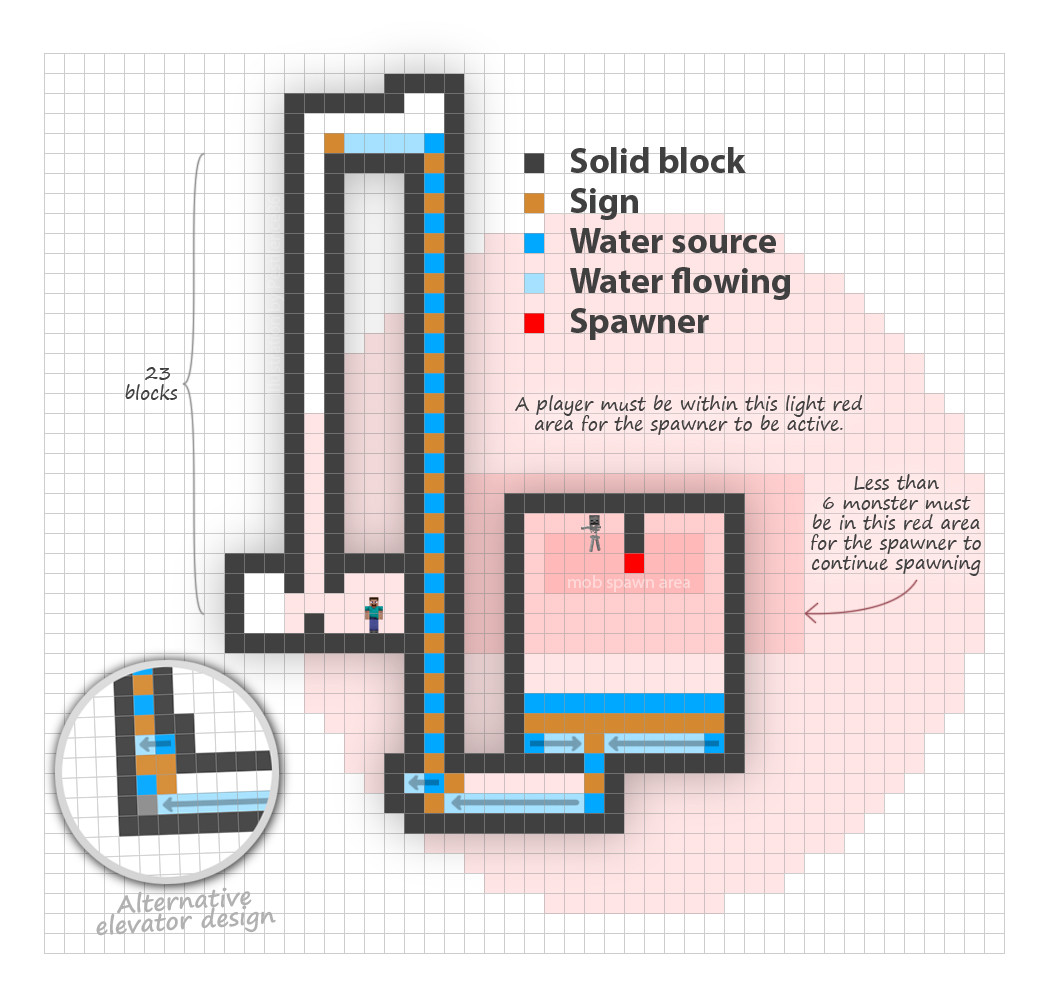 The idea, as far as I understand, is that mobs spawn in the air and fall down through the water suspended by signs. They then get sucked into the "funnel", pushed over to the water ladder (which they climb by swimming up), then dropped to near-death.

I've seen farms like this in operation in SMP, so I understand the basic principle. However, I attempted to build one from this schematic, and it doesn't seem to be working. It seems that the mobs are able to float / swim up on the water blocks below the spawner (above the signs), meaning they never actually fall to the bottom to get sucked up the latter.

As so many people seem to like this design, I'm willing to bet that I made a mistake. However, looking at the schematic, I see two different places -- the aforementioned water and the water block at the beginning of the "funnel" -- where mobs could get stuck. How is this farm supposed to work, then?

What you see in the spawner room is only a side view (and a pretty awkward one at that).

You should cover one edge of the room in source blocks, it will swipe the room and leave you with a 1-block border on the other side. Dig that one down two blocks and place water currents to direct the mobs to the corner (1), where you can connect your elevator.

(1) The picture seems to indicate to gather them in the middle of the edge instead. I would advise against this, as several mobs can block each other at the bottleneck if they come from both sides.

Possible modification: create the recommended 2x2 column and place the signs so that they are properly spaced. Also, make the design as friendly as possible to the clumsy mobs. Few designs are foolproof (mob-proof).

3
Water Elevator does not work in death-pit EXP farm
1
How does the mob grinder work?
6
Has Minecraft mob spawning been changed to reduce effectiveness of vanilla mob farms?
3
Mob spawner - how far do mobs need to be from the spawner for new mobs to spawn?
4
Mobs die when there's more than 33~ in a 2x1 farm drop V1.11
1
What's wrong with my mob farm?
4
Optimal distance to AFK for creeper farm?
1
How can I make a spawner that summons Items?
1
Effective Path Finding Mob Farm