How do Minecraft mobs behave in water?

Thanks for the help.

When placed on the ground in front of a two-block high doorway, soul sand prevents players from going through it from that direction, making it useful for building one-way passages or invisible barriers. This affects mobs too as they have to jump to get out of the slowing effects of the block, thus are unable to get through the door.

Because minecart tracks can be laid on Soul Sand like most other block materials, this quirk can be exploited to create minecart-only gates (by placing soul sand on both sides of the doorway). This is one of the few ways to allow minecart tracks to go directly inside a secure area without risking wandering mobs getting in.

Here's a snapshot of a small one I built beside my house, with a crossing point for players. 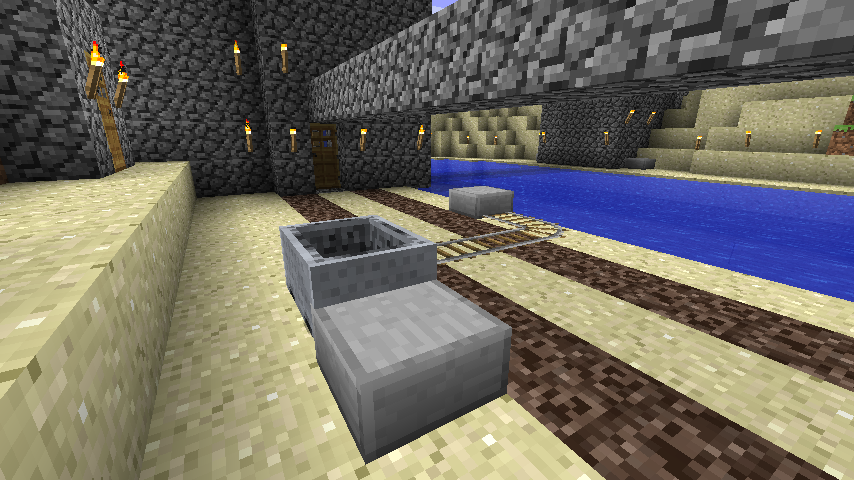 To answer the first question:

When mobs enter water they swim to the surface. My son has built a mob "generator" which relies on this principle to draw the mobs to the surface where they die and deposit their goodies for him to collect.

Eventually, Mobs will die if in water too long. Squids will not die, but they are not mobs and will not harm you. (Note: Squids can't swim upwards. I hope this is useful in case you ever find a squid farm!)

8
How do I get monsters to spawn in a certain place?

7
Spawning mobs: does it matter if I stand still or not?
18
Is there a way to create a water item-slide from a creature-trap without chickens passing through it in Minecraft?
3
Will mobs despawn when moved by water?
5
Making mobs ride other mobs in Minecraft
6
Do mobs behave differently if you have an arrow pointed at them?
4
How does this spawner farm work?
7
How can I protect my Iron Farm villagers from lightning?
3
Minecraft - Guardian farm low spawn rates
1
Can mobs spawn in water near Mushroom Islands?