What's the point of different cooldowns for the powers?

I was wondering, what's the point of having different cooldowns for biotic powers (like charge and shochwave) if they all go on cooldown after one is used, and they all recharge in the same time?

Using a power puts all other powers on a shared cooldown, but the recharge time is actually different depending on which power you use. Using your example, Biotic Charge is a mobility power and invokes a 6 second cooldown while Shockwave invokes a 12 second cooldown.

You can check the exact values on an online power list or on the bottom-right of the talent tree screen: 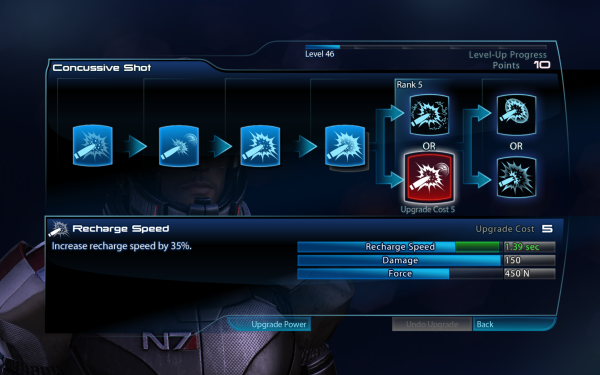 As far as my though goes into the reason for a global cooldown on abilities is that the Devs want you to use the abilities of your whole squad instead of simply relying on your own. Take games like Diablo or LoL for example, as you are only able to control your own character and subsequently one set of abilities, you are more heavily reliant on your abilities and the ability to use them more frequently rather than using an ability, switching to another character, using an ability and so on. The ability to use multiple skills in quick succession would also lead to a greatly higher damage output and would require the AI's to be enhanced through their damage, health or intuition of the battlefield. At the end of the day they are meant to be used in conjunction with your weapons and cover on the map, how fun would it be simply waltzing through the map using nothing but ability after ability (it would be fairly amusing for awhile).

7
How do Detonation power upgrades work?
8
Which abilities don't share cooldowns?
8
Do ammo powers from different squad mates stack?
5
Is there a weak point on an Atlas?
6
How do I unlock bonus powers?
5
How does the DPS between Nova's rank 5 evolutions compare?
2
Is there a good way to determine squad mate cooldown time?
19
At which exact point are the war assets and galactic readiness evaluated for the ending?
4
Does the Scorpion pistol work as expected with mods and ammo powers?
1
Power build and play strategy in mass effect 3 - Radius/Range vs Damage?