While in multi-player GLaDOS only seems to compliment Orange (P-Body) for winning and says that Blue (Atlas) is "Dead weight". I'm pretty sure this is standard because she says it when Orange is just holding a button down, but is it in anyway a reflection of your progress?

GlaDOS seems more interested in dividing Blue and Orange than picking favorites, and will show favor to either Blue or Orange. In the Yogscast, GlaDOS awards Orange "five science collaboration points" in one level (10:27 in), then awards the same to Blue in a later level (11:45 in):

In a later episode, GLaDOS states that:

But the smoking gun, as it were, that she doesn't necessarily favor Orange comes at 9:00 when she states:

To reiterate, this is not a competition. Still, if it were, Blue would be winning. [inaudible] Blue receives five science collaboration points.

So whether it's dependent on performance is possible (although unlikely if you watch these videos), but she doesn't seem to have a complete disdain for Blue.

The responses may not always be used with the same frequency, but most of her taunts to one seems to have an equal and opposite. That said, she does flat out say she hates blue a little more, one remark I can't find the dual of.

So also going by the numbers, it does seem like she hates blue a little more.

There are also plenty of general jabs that don't really seem to favor either side, but are just (vain) attempts to develop mutual animosity between the partners.

The developer commentary mentions that blue is supposed to be a prototype robot, with orange being a more advanced model. 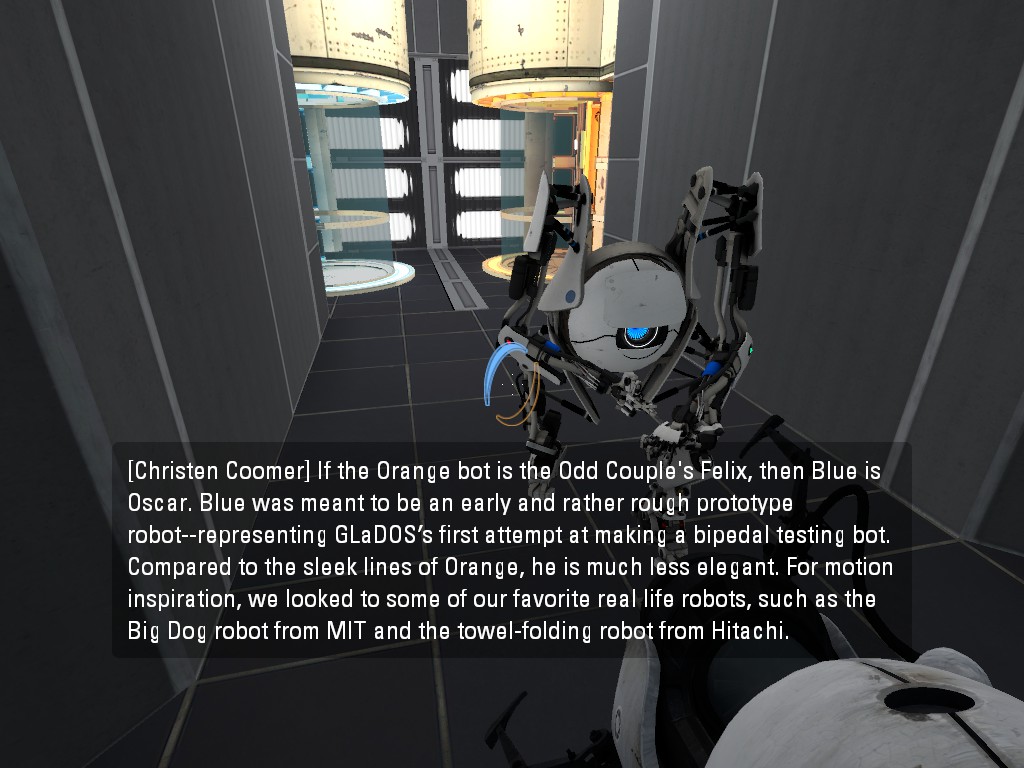 30
How can I extract the full audio or get subtitles of GLaDOS's sentences in Portal 2?

19
Does the order of playing the single player or co-op campaigns matter?
26
Flashing blue “error” - is this part of the game, or a fault?
71
Does GLaDOS say anything meaningful when she “gives us the fast version” in Test Chamber 8?
5
What does blue portal and orange portal signify?
12
What is the blue/orange symbolism in Portal 2?
20
What does GLaDOS mean with “One day they woke me up”?
1
Why does the game crash every time I complete a level under development using the Puzzle Maker?